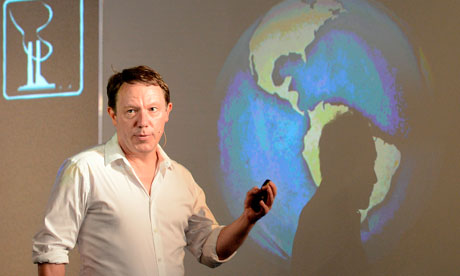 Michael Billington in today’s Guardian nominates Ten Billion as the ‘most momentous theatrical performance’ of 2012. The show was a lecture by Stephen Emmott, at the Royal Court Theatre Upstairs, on the consequences of human overpopulation and climate change.

Billington writes: ‘I came out shaking with fear, but also moved by theatre’s capacity to confront the emergency facing our planet.

‘This was theatre doing what it does best: confronting us with unpalatable facts about our very existence. This doesn’t mean that there is no room for invented stories or that King Lear and The Lion King have suddenly become redundant. But Ten Billion, directed by Katie Mitchell, shocked us into a new awareness of the future, and even the existing present, with ecosystems being destroyed, the atmosphere polluted, temperatures rising and a billion people facing water shortages.

‘I don’t know a single person who saw it who didn’t feel it was a life-changing experience. If enough people, especially those in positions of power, could see Emmott’s lecture, it might, just might, help to save our planet from destruction’.