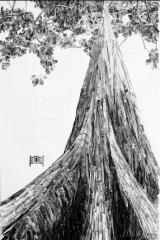 The results of three years of research and production, the interdisciplinary exhibition from Singapore, Jalan Jati (Teak Road) opened at the Edinburgh Science Festival on 21 March 2013 and runs at the John Hope Gallery Royal Botanic Garden Edinburgh until July 2013.

Jalan Jati (Teak Road) traces the material, genetic, historic and poetic journeys of a teak bed found in a Singapore karang guni junk store back to where the original tree may have grown, via photography, woodprint collage, animation and DNA tracking technology.