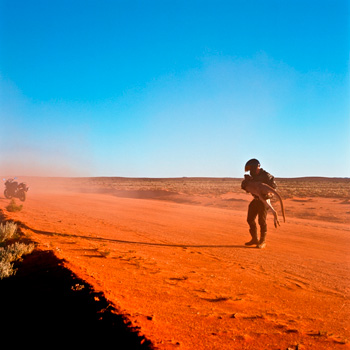 Civilization notwithstanding, we live with and among nature and animals. Cultural followers such as pigeons, rats, foxes, and – in Canada – bears, live off our refuse, while bacteria reside in our guts. The industrial world eats further into natural habitats, but micro-environments flourish in urban and exurban sites. Responding to the contemporary desire to go “back to nature,” The Power Plant’s summer group exhibition ‘Adaptation: Between Species’ explores interspecies encounters. What happens when humans, animals and the natural world meet? What forms of communication, miscommunication, intimacy, and exchange ensue?

While species live in ever closer proximity, many people feel profoundly cut off both from natural environments and from their own animal natures. Our deep longing to connect with non-human life forms is reflected in contemporary phenomena ranging from the boom in pet ownership and the widespread anthropomorphism in popular culture to the upsurge in vacations that promise to transport us to unspoiled lands.

However, despite this deep-seated sense of alienation from nature, the species are in fact closely related. For instance, as Donna Haraway notes in her book When Species Meet, 90 percent of human cells are filled with the genomes of bacteria, fungi, protists, and such, with only 10 percent comprising human genomes. ‘Adaptation’ explores this commonality between the species and considers the various forms of intelligence and knowledge they share. It also asks what our interactions with other species reveal about our human as well as our animal natures. Highlighting the urge to observe, touch, live with, and mimic other species, the exhibition delves into the intimate and, at times, uncanny fusions that result. Many of the artworks hover between seriousness and absurdity, embracing the potential for fantasy, childish antics and regression at the core of human/non-human relations, and reveling in the transgression of both social acceptability and human identity that interspecies encounters can engender.

Coinciding with the United Nations International Year of Biodiversity, the exhibition considers how adaptation functions as a form of biological and cultural survival. It also takes a realistic view of human/non-human dynamics, acknowledging the unbalanced and exploitative power relations that too often characterize our society’s attitudes toward other life forms.

What do we learn by sharing our lives and this planet with other species? Impersonating and identifying with the natural world and the animal kingdom might contain the seeds for radical change, as we affirm our links with other species, recognize our animal natures and experience the liberation of feeling wild at heart.

A publication together with an extensive program of public events accompanies the exhibition. Highlights include a DJ Set and SKRY-POD public tarot reading by Ontario artists FASTWÜRMS, a film screening ‘Animal Drag Kingdom’ with works by Guy Ben-Ner, Douglas Gordon, Kathy High, Kristin Lucas, and Steve Reinke and Jessie Mott, a children’s workshop on animal language, and free gallery tours every weekend at 2pm.

The Power Plant offers free gallery admission all summer thanks to the support of the Hal Jackman Foundation and Media Partner NOW Magazine.

via Adaptation: Between Species / e-flux. Unsurprisingly, there’s a lot of art around these days questioning our relationship with the natural world and the creatures that live in it. Arts Catalyst’s extraordinaryInterspecies series last year contained a series of works in which artists “collaborated” with animals in disturbing ways that disrupted our conventional ideas of the co-dependency of the natural and human worlds.

As part of their excellent Flash Point series “How do arts respond to the natural world?”, art:21 blog has just published an essay by curator Nova Benway on the artist David Olsen, whose work explores the toxic impact we have on the natural world. As part of it he adopts the persona of “Vulture”, dressing in bizarre protective handmade clothing to ape the vulture’s adaptive strategy of becoming resistent to the pathogens that it finds in the decaying food that it finds. His attempts to become animal appear ridiculous.

Benway explains how Olsen then suberges pieces of work beneath the polluted waters of Benway Creek in Brooklyn:

The creek is one of the most polluted waterways in the country, and the sculptures are, in a certain sense, tools for healing. Made from natural materials like clay, wax, and rope, they employ humble filtration devices to purify tiny amounts of water, or crystals intended to absorb negative forces. One recent work, Witness (2008), is a seal skull with crystals embedded in the eye sockets. A rope attaches the skull to a glass buoy, so when it is lowered into the water it can float through the depths, “seeing” and collecting information or negative energy, until it is retrieved by the artist. Olsen adopts the identity of “Vulture” for these actions, wearing a handmade protective helmet and suit to mimic the bird’s heightened immune system. Of course, these activities have negligible impact on the rampant pollution of the waterway. Olsen’s deliberate mixing of pragmatic and mystical solutions to the problem further obfuscate their effectiveness, while retaining the urgent desire for change.

Its an interesting idea, and I like the idea of art-as-warning, but I confess the Mad Max apocalypticism of this work puts me off. That it revels  in the aesthetic of decay seems to dent the point it may be trying to make about the awfulness of pollution.

Read art:21 blog’s How does art respond to the natural world series of Flash Point essays.

Pictured: Above, David Olsen as “Vulture”; below, Witness (2008) by David Olsen.

An exhibition, live event, symposia and family day at

www.artscatalyst.org for details and booking
This event was also in Manchester in March, see more about that by clicking here.

How do humans and animals relate to each other? In The Arts Catalysts’ Interspecies exhibition and event, seven international artists have created a range of work that explores this complex relationship. From live experiments that allow visitors to communicate with fish to a video work that explores the age-old affiliation between falconer and falcon, Interspecies brings together a number of artists working with animals and explores the boundaries of our interaction. Curious about the animal’s point of view, the artists challenge the dominant human viewpoint and aim to work in collaboration with other species.

The family day on Sunday 4 October will give families a chance to see artists in contact with real animals – like performance artist Kira O’Reilly who will be Falling asleep with a pig, called Deliah, and Antony Hall whose Enki Experiment 4 invites visitors to communicate with an electric fish.  During the afternoon, parents and children can take part in a series of free events.

Interspecies is organised by The Arts Catalyst in partnership with A Foundation.

1-3pm and 3.30-5.30pm, Primate Cinema: How To Act Like An Animal. Two workshops with Rachel Mayeri for over 16s exploring the social dynamics of non-human primates through performance.  Limited spaces, please book online.

2–4pm Becoming Bowerbirds. These intriguing birds show unusual creativity – they construct bowers which they decorate with found objects to attract females. Children and parents are invited to be a Bowerbird for the afternoon with artist Sally Hampson.  Advanced booking advisable at www.artscatalyst.org (Children 5yrs or under need to be accompanied)

4.30pm, Animal Handler’s Tales, broadcaster and trainer of the owls used in the first Harry Potter movie, James Mackay talks about his work as ‘The Animal Man’ with exhibition curator Rob La Frenais.

Physical access to some parts of the exhibition and events is limited; please contact admin@artscatalyst.org for further information

Artists exploring gray areas: Interspecies at Manchester Cornerhouse until March 22. Four new pieces that attempt to work with animals, not as subjects of their art, but “as equals”. The artists involved include performance artist Kira O’Reilly, whose piece involved 36 hours living, sleeping and eating, with a pig called Delilah. You can read  O’Reilly’s blog about the experience on her site here.

It’s not the first time O’Reilly has worked with pigs, though last time it was with a dead one, and the Daily Mail was incensed. “IT’S ART SAYS THE NAKED WOMAN WHO’LL HUG A DEAD PIG ON STAGE” ran the headline to a piece that accompanied her 2006 performance in Newlyn.

Interspecies has been curated by Arts Catalyst, an organisation that works in that strange but sometimes extremely productive space of the Venn diagram between arts and science. They partnered with us to run the Nuclear Forum at the end of last year with Gustav Metzger and James Acord – exploring the depths of another subject that often goes undiscussed.

Post-industrial society assumes it’s past such primitive notions as taboos. OK, sex is everywhere in these days, but try asking people when they last saw a dead body? In our society death, as natural a process as sex or birth,  has become invisible. Victorians used to hold dinner parties in graveyards; you’d get arrested if you tried that now.

I was talking to the designer Julia Lohmann recently; she is the creator of the cow bench – a single cow’s hide stretched over a wooden skeleton that ends up looking uncomfortably like the animal that surrendered its skin for us. It’s physically uncomfortable to sit on too, but that’s the point. Lohmann is in fact a passionate animal lover. When she returned from a spell working on a farm to London she saw an advertisement for dinosaur-shaped chicken nuggets that so disturbed her that she set out on a process that ended with making a sofa that looked like what it really was.

And, as O’Reilly’s work suggests, our relationship with meat has never been stranger.