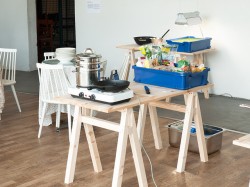 The Azolla Cooking and Cultivation Project (2012) is now available as free pdf, as paperback at Amazon US / UK and as e-book at Kindle Store.

Erik Sjödin is an artist and researcher based in Stockholm and Bergen. His practice explores interdependencies and interrelationships between humans and non-humans as well as questions of being and becoming.

Erik’s work is primarily constituted of transdisciplinary research and interventions in the public realm. His projects are often of an exploratory nature and take shape over several years. He frequently collaborates with and consults experts such as scientists, farmers, chefs and craftspeople.

Screenings of An Ecology of Mind

Screenings with Nora Bateson of her film An Ecology of Mind, a portrait of her father, Gregory Bateson
London, Manchester, Bradford, Bristol, Dartington, Glasgow, Edinburgh

“Tell me a story” … of life, art and science, of systems and survival

Gregory Bateson’s way of thinking – seeing the world as relationships, connections and patterns – continues to influence and provoke new thinking about human social life, about ecology, technology, art, design and health. Nora Bateson, Gregory’s youngest daughter, introduces Bateson’s ideas to new audiences in her film An Ecology of Mind, using the metaphor of a relationship between father and daughter, and footage of Bateson’s talks.

These screenings and discussions show a way of thinking that crosses fields of knowledge and experience, one that can lead out of the ecological crisis and towards a more sound way of living.

News items could feature all or any one of the following angles: culture and science, cities and ecology, biology and communication, family health and systemic therapies, technologies and religion.

Nora Bateson is available for interview; please contact Wallace Heim, as above.

Gregory Bateson, British-American anthropologist, biologist, systems thinker (1904 – 1980),  invited people to look at a thing – an earthworm, a number sequence, a tree, a definition of addiction, anything at all – by seeing the interdependencies that connect them and the processes beneath the structures. He believed, “The major problems in the world are the result of the difference between the way nature works and the way people think.”

Interview with Nora Bateson by Rachel Freeman on The Ecologist online:

“For me, watching Nora Bateson’s film was overwhelming. Her biggest achievement is in explaining abstract concepts in a clear way. Until now, Batesons’ work has been largely inaccessible outside the academic community. With this film, this is bound to change”

“The double bind that we now face is this: on the one hand, we want to preserve our natural environment; on the other, everything we do to grow our economy and preserve our standard of living disrupts the natural environment and our relationships with it. Nora, like her father, suggests that we must raise our consciousness and learn to think in new ways to escape our pathology of wrong thinking…Nora Bateson presents viewers not only with an intellectually challenging and inspiring work of art, but also with a glimpse of evanescent hope.”

“Gregory Bateson taught us how to stop having the most fundamental old ideas: the static, separating, reductionist fictions that dis-integrate an integrated world. Nora Bateson’s beautiful portrait of her father’s key insights is a stunningly effective antidote for a new generation that now needs his wisdom more than ever.”

“An Ecology of Mind is a spell-binding, lyrical, and very important film…”

Awards for the film: