Zoë Svendsen, theatre director and researcher, continues our series New metaphors for sustainability by turning to ‘symbiosis’ as a better term.

When I was given the challenge of thinking about a metaphor for sustainability, I realized I didn’t really know what it was, other than the idea that maybe you shouldn’t do quite so much of something so that you could do things again in the future. But then I got to thinking about the underlying questions. What do we need to sustain? What’s the idea of sustainability? It’s linked to current discourses against consumption and to ideas about austerity and about doing less.

What could you replace sustainability with as a metaphor that would allow you to do something as opposed to just not doing something? I was thinking about things like conversation and reciprocity and some kind of interaction with your environment that didn’t deny the pleasures of exchange and of use. I eventually arrived at the term ‘symbiosis’ and symbiotic thinking.

What’s interesting about the term ‘symbiosis’, is that as a metaphor it takes us away from the ‘nature versus culture’ idea or ‘human benefit versus benefit for nature or the environment’, and rather asks us to think about how there might be certain kinds of human symbiotic interactions and at the same time benefits for the environment.

The symbol for this kind of activity are bees, and bee-keeping. There can be a human relationship to these kinds of symbiotic practices that happen in the environment already – such as the spreading of pollen and the creating of honey.

And around that word ‘symbiosis’, there’s a whole series of other underlying terms or thoughts that could be replaced. Instead of thinking about ‘austerity’ – which is a negative thinking towards the future – that we can always only do less and life isn’t going to be as good – you might replace that with ‘ingenuity’. This celebrates invention and entrepreneurialism and thinks about what’s at hand and what possible in what may be limited circumstance but treats those circumstances as a pleasureable challenge.

Part of the problem with austerity is that it makes you want to rebel. I have occasional bouts of recycling rebellion – I go ‘fuck it’ and throw it away. ‘I want to waste, I don’t want to be sensible’.

This is something to do with the moral imperative around the idea of austerity – it’s just not fun. Part of the idea about  ‘symbiosis’, is that you don’t have that same kind of moral anxiety around all of your actions. You’re directed to a positive action instead of endlessly thinking about the negative – which just makes you want to be naughty and not do it.

Zoë is included in our film. 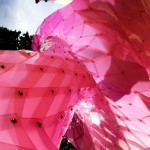 OR2 is a combination shading device and solar-powered chandelier designed by London-based Orproject. The structure’s purpose is twofold: it acts as a source of shade during the day, and it turns into a dazzling chandelier at night, dispersing light collected by photovoltaic cells hours before.

The pink-tinted structure was built as part of the London Festival of Architecture in June 2010. The work is a follow-up project to the OR single-surface solar roof structure. OR2 is translucent while in the shade, but it quickly fills in with color when exposed to sunlight.

According to the designers, OR and OR2 are the first structures to use photo-reactive technology at an architectural scale. The designers explain, “The beauty of OR2 is its constant interaction with the elements, at each moment of the day OR’s appearance is unique.”

Orproject is a London based architecture and design practice set up in 2006 by Francesco Brenta, Christoph Klemmt and Laura Micalizzi. Their work explores advanced geometries with an ecologic agenda, the integration of natural elements into the design results in an eco-narrative unfolding into the three dimensional space. Past projects range from experimental small scale installations to large real estate developments.

via OR2 demonstrates an elegant use of photovoltaics in public art – Green Public Art. 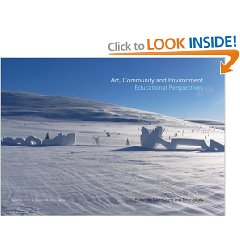 Art, Community and Environment investigates wide-ranging issues raised by the interaction between art practice, community participation, and the environment, both natural and urban. This volume brings together a distinguished group of contributors from the United States, Australia, and Europe to examine topics such as urban art, community participation, local empowerment, and the problem of ownership. Featuring rich illustrations and informative case studies from around the world, Art, Community and Environment addresses the growing interest in this fascinating discipline.