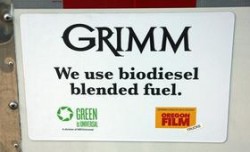 In Oregon, the Annual Governor’s Meeting on Film and Video was recently held in Portland, which is quickly becoming a hub of media activity thanks to the dedicated efforts of independent filmmakers, the success of Laika Animation Studio films like Coraline and ParaNorman, and current television productions Grimm, Portlandia, and Leverage (which has just finished shooting on its final season).

According to the Governor’s Office of Film and Television, the average amount spent on production in Oregon each year has risen from $7 million to $100 million. This amount is expected to surpass $120 million next year as tax credits and other incentives draw production away from the hustle and bustle of Los Angeles to the relatively more laid back atmosphere of the Pacific Northwest.

With this change, the Office of Film and Television has gone out of its way to promote sustainable production practices and has included a link to a Green Production Guide on their website. At the meeting, Oregon’s First Lady Cylvia Hayes took the stage and delivered a well-received presentation on Grimm‘s efforts to use blended biodiesel for their fleet, Leverage‘s use of sustainably harvested wood for set construction, and Portlandia‘s decision to hire a “master recycler” to oversee on-set sustainability. Though the state still has a long way to go to make productions carbon neutral, these initial steps are very encouraging as Oregon seeks to promote itself as a new destination for green film and video production.

Raise the Green Roof: Theater for the New City

Crystal Field, the artistic director of Theater for the New City, is thrilled. Under Field’s direction, TNC has been a pioneer in the environmental movement for over 15 years, and she remembers when environmental issues were taboo. “When we wrote street-theater songs about organic food and rejecting genetically modified foods 10 years ago, people thought we were crazy,” she remembers. Today, her street theater focuses on environmental responsibility and climate change and the fact that here in NYC, “We may all be underwater while not having enough water to drink.”

Field is inspired by the fact that now there is technology accessible to help us address these issues. The issue is at the forefront of our minds, and now city and governments are willing to help, which Field says is “going to change everything. It’s not just going to be little cliques. It’s going to be well into the social fabric.” She adds, “Now we’re going to put some money where our mouth is,” and that’s just what TNC has been doing.

TNC has taken extensive steps to make its facilities and productions more sustainable, and they have ambitious plans to continue their sustainability efforts. TNC has already taken the following steps to green their theater:

Beyond these initial steps, however, an ambitious green renovation plan is in the works.  TNC is currently seeking funding from the Kresge Foundation, local businesses, and charity events; once a set goal is reached, the city of New York, which has become very active in green issues via its ambitious PlanNYC, will cover the remainder of the costs.  Features of the renovation are set to include:

Field says that their emphasis on a green roof came about for three reasons.  Firstly, wanting to create an urban green space but without extra land of their own, they decided to turn to an unused space of their own: the roof.  The space will not only reduce their carbon footprint and improve the air quality in a crowded city, but also provide organic food for the community.  Secondly, they’re hoping that it serves as a model for other local theaters, saying, “If all theaters in New York City followed our example, the reduction of our collective carbon footprint would be extraordinary. “  Lastly, they realized that it would cut down on their long-term energy costs by reducing heating and cooling expenses, and might even help to prolong the operational life of the roof itself.

TNC’s plan is ambitious, and the obstacles to fundraising in today’s economic climate are many, but Field remains positive and determined to keep working towards a greener planet. She urges relentless perseverance and gradual change: “One small step and then another small step that is obtained with blood sweat and tears. But, you know, we don’t have slavery in this country anymore, right?” She believes Americans have the ability to recognize their mistakes and change their ways. She jokes, “We smoked, and then we got cancer. But then we gave it up. We learn.”

When asked what recommendations she would give to other theaters looking to go green, Field suggests that they start with green committees made up of staff and audience members, and that they address how the theaters can save money right away by greening their basic operations, from buying green janitorial products, to switching out lightbulbs, to recycling everything possible.  She advocates going online to learn about the basic ways to green a business and to start applying those practices. Lastly, she suggests that you “start talking about green on your own website. Put your plans on your website and people will start to contact you who want to get involved.”

According to Field, it is the theater’s job to be a part of the solution: “The theater is going to tell us that things can be solved.” She maintains that theater is good at reinforcing the message of going green to people who already support that cause – the converted. “The converted need inspiration to go on and do the work that needs to be done. Theater is of great value in that way.”

More information on TNC’s green roof via their website

“What is a green roof?” via HowStuffWorks