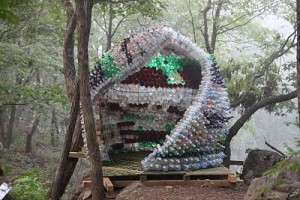 Geumgang Nature Art Biennale was first held in 2004 and again in 2006 and 2008. This year it is titled “Nature and Peace.” Yatoo was founded almost 30 years ago in Gongju, in the Chungnam Province, 150 km south-west of Seoul. Yatoo, is the name of the Korean Nature Artists Association which organizes the Geumgang Nature Art Biennale and means “Thrown into the field”. The Korean artists use the term “thrown into field,” because, as Koreans, they feel the responsibility for nature is theirs. Why? Korea is a unique country in many ways. As a technically advanced society, it lives collectively in respect for ancient culture and nature. It requires individuals to responsibly share their experiences abroad, to learn from other cultures how to honor nature because many countries have this problem now. This has resulted in Korea being one of the largest Land Art or Nature Art centers in the world.

Within the exhibition’s title, and the rhetoric of the artworks is a reflection of how people could behave so as not to discourage or disrupt other species, the way they have discouraged swallows. How can one live in harmony with the whole of nature? Art gives us advice in finding answers to this sticky question. Trees, water, light, sound and even wind become a part of the artist‘s installations. They will be standing on site for some time and the site will change its form and structure with help form nature itself. The whole process can be observed in the park and at the Geumgang riverbank throughout the year.

The combined rich and diverse histories of this year’s participants guarantees a high level of quality work. We have 15 artists from 13 different countries: Ghana, Cameroon, India, Poland, USA, Germany, Peru, Philippines, Netherlands, New Zealand, USA, Canada, Hungary, Bulgaria and Japan, and 12 artists from the host country, South Korea. The character of each creator’s piece is shaped by the unique culture, history and geography of his or her country of origin. Each piece is also marked by the artist’s specific relationship to nature. It is not surprising that the installations differ from each other to such an extent.

Nereus Patrick Cheo, Cameroon (above), was inspired by debris washed up onto the beach by the Atlantic to create “The Watch Tower Kiosk.” He used found plastic water, beer and soft-drink bottles to make an open structure which talks about a worldwide problem: A great majority of the world’s population consume water and drinks from these bottles but at least half of these bottles are never recycled. His project entailed the construction of a Kiosk-like shape 5m high and 3 x 4m wide. The kiosk is a dome shaped sculpture beautifully created from used bottles woven together with wire on a base of bamboo, wood and nails. Utilising the bottles as an artistic statement, he has given them a new life.The work offers an opportunity for attention, care and open vistas for reflection on how we interact with our environment. 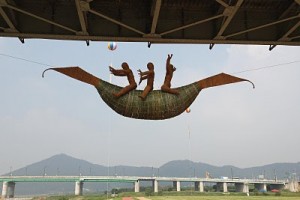 For Roger Tibon, Philippines (above), the watchwords “nature and peace” are a metaphors for a journey uniquely associated with the boat. This is not surprising considering that the Philippines are comprised of more than seven thousand islands. Many of them are inhabited by people who have never left them, and often travel by boat. The boats are more than just a way of movement and communication for them. The boat, with three figures on it, has been installed hanging under one of the cities bridges enabling many people travel over this traveling symbol. Of course the real contemplation begins when we reach a beautiful riverbank and silently, listening to sound of the water and gaze at the sculpture from a distance. 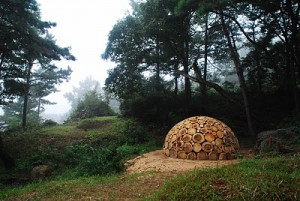 New Zealand artist, Donald Buglass’ Cell (above), relies on the beauty of physics to hold itself up. Cut sections of tree trunk support each other and demonstrate a link between the constructive tendencies of humans and the environment. “Cell” represents the beauty and balance of nature. It is the cells of plants, nucleus of an atom or, perhaps, the rising sun. At the same time it portrays a fundamental shape for shelter (in this case, one we are excluded from) and the peace and security that this might otherwise offer us. His work also has underlying references to the ancient graves at Yeonmisan. 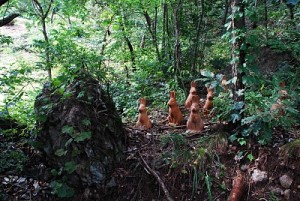 Karen Macher Nesta (above), Peru, is an artist who believes in specific interaction between mother earth and Her inhabitants. In the ancient beliefs of her country, the land must be respected. Consequently people offer gifts to nature: fruit, animal blood, coca leaves etc., asking Her to be more fertile and calm. Earthquakes are also in her nature, and if it comes to this kind of disaster it means that She is angry. The artist used rabbits as a symbol of fertility because of their fast reproduction capacity. The rabbit figures were made from clay, and were designed to last for a short period of time in order to return to the earth where they came from (some cement has been added to extend this period). Over thirty larger-than-life rabbits are located around main path in the Ecological Park. The rabbits will eventually disappear and be absorbed into the forest floor.

The work of Pawel Chlebek Odebek, Poland, refers to central values such as family, love and care. In “The New Generation” (above) the artist points out the mystery of new life and implies its dependence on our care. The art-work is a pine sapling planted in soil between the two large opposing torsos, male and female. Eventually the project will result in the interaction between the carved form and nature’s power (as the growing tree trunk expands). Time is co-creator of this piece.

For these artists, nature and peace are much more than just words.

The year of the first Nature Art Biennale – 2004

The full article will be published in the upcoming second issue of WEAD magazine online soon HERE.