Frozen Planet in Concert at the Hollywood Bowl

Following the success of Planet Earth Live, the world premiere of Frozen Planet in Concert comes to the Bowl’s big screen in the latest co-production of the BBC and Discovery Channel. The ultimate portrait of Earth’s last great wilderness, the polar regions, will be presented with stunning imagery with live orchestral accompaniment conducted by composer George Fenton.

Presented by LA Phil.  For tickets and information, visit HollywoodBowl.com.

State of Climate Art: On FIRE!

The Arts (music, poetry, theater and film) are one of the best vehicle in which to reach specific target audiences with your message.

Hollywood films (An Inconvenient Truth), Live Aid, and Rock the Vote are some examples that come to mind. However, I think we’re only just scratching the surface and need to more fully integrate sustainability messages into cultural programming. Someone needs to create a Sustainability Hip Hop Dance that rivals the Macarena.  Maybe the movements could simulate recycling?

Greenwala – First generation “Greensters” are making a statement that Hollywood can be green.

Some friends of the CSPA, Stephen and Enci Box, are leading this fantastic project to produce a film sustainably. Here is an excerpt from the article on Greenwala: 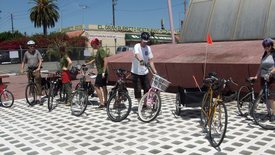 On the set of “At What Price” made possible by Rebel Without A Car Productions, you wont see any cars parked around but you will see bikes galore! All ranging from beach crusiers, to Xtracycles to homemade bicycles with trailers.On the first day, everyone showed up on their bike, introductions where made, speeches said then it was off to get the equipment. I was given an Xtracycle to ride across town since it was capable of holding A LOT more then my little basket could and we needed to pick up some heavy equipment. Most of the cast and crew got to and from set using a bike or by taking the bus I must admit, living over 30 miles away made me the black sheep on this crew, as I drove to set everyday but everyone put in the effort not to make a huge carbon footprint. 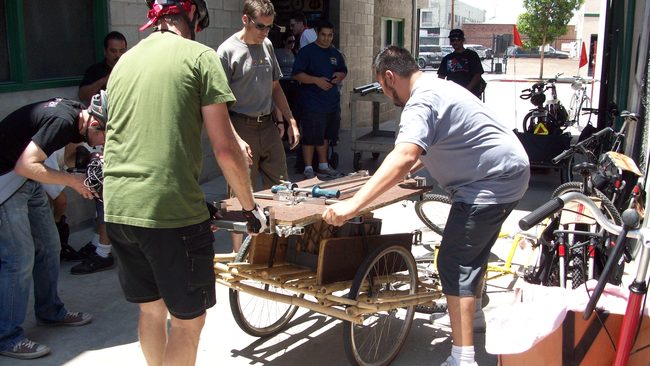 After venturing through the back streets of Hollywood, we showed up to Castex Rentals to very surprised looks from the Castex employees. At first they didnt really believe we where going to haul all of this film equipment on just bicycles alone, they even started laughing as we started figuring out what could go where. We got to work on loading up the bikes, strapping down c-stands, piling up sand bags, finding room for apple boxes, etc. After the nice men at Castex finally realized we where the real deal, they jumped right in and started helping load stuff, then of course started taking pictures to share with everyone from their camera phones. I dont blame them; we ARE the first generation Greenseters after all.

via Greenwala – First generation “Greensters” are making a statement that Hollywood can be green..

FALLEN FRUIT who will be in residence at the Hedlands in the Bay Area for the month of July opens a new show this month in Los Angeles that explores the most popular fruit in the world, the banana. United Fruit, drawn from Fallen Fruit’s recent trip to Colombia, examines the social, political and pop history of the banana.

OPENING RECEPTION: Tuesday 16 June 2009, 8pm – 10pm, featuring Are You Happy to See Me?, a participatory performance involving hundreds of bananas available for eating. Attendees will be encouraged to photograph themselves playing with this often comical or suggestive fruit.

Cornford & Cross’s current installation at Wolverhampton Art Gallery, The Lion and the Unicorn, created from 15 tons of locally-sourced  coal as an exploration of topic of fuel, climate change and economic stability. Photo by Paul Ward. Until Jan 31 2009.

Actually, no, it’s not that hilarious at all. It’s more just a dig, really, at the forthcoming slew of eco-conscious movies you’ll be seeing next year. There’s The Thaw (deadly parasite unleashed by melting icecaps), 2012 (eco-doom)  and Strays (nuclear meltdown). Then there are the statuatory remakes. The Day The Earth Stood Still (this time around Klaatu has come to tell us off for wrecking the planet) and Creature From The Black Lagoon, in which the seas wreak vengence on us.

“The dopiness of so-called ecotainment – environmentally virtuous entertainment – rises in direct proportion to its message mongering,” says Scott. “Oh the hilarity!” he chuckles.

This default critical line on “ecotainment” (the neologism itself is a stinker, face it,) is interesting. The standard reaction is that the genre is a joke. Hilarity! My aching sides. Etc.

It’s entirely possible that these films will be stinkers.  Hollywood blockbusters generally are. Probably unintentially funny at times too. But while right-wing Americans believe that Hollywood is trying to foist a liberal agenda on the world, these films are mammoth investments by hard-nosed producers, so it’s interesting that the disaster-movie juggernaut believes that it can profit successfully from exploiting what is presumably a growing public anxiety in this way.

But there is also an assumption on Scott Brown’s part that the very idea of making a film that contains an environmental message is funny.

Yesterday I posted an interview with David Lan on the main RSA Arts & Ecology site. David is a man with a reputation as one of the most remarkably creative and successful people in London theatre. As Artistic Director of the Young Vic his productions have been universally lauded.

Until last weekend. The reviews for Amazonia have been, and it’s no fun to admit this,  pretty wretched. Lyn Gardner – a consistent champion of new work – was scathing. But her review echoed Scott Brown’s default position. “The preachiness makes you long to rush out and lop down a tree,” she says.

In the interview, Lan is still trying to comprehend what triggered such a hostile reaction. He’s one of the theatre’s most experienced figures – a virtuoso of different forms, and he didn’t see it coming, he says. Now he’s wondering, did they contextualise the play well enough? Did they create enough of those subtle cues that control the audience’s expectations? Or is it just very, very, very hard to make art that says meaningful things about the great invisible beast that is the environment? Now that a critical mass of work about ecology is starting to arrive, mabye it’s time to start soul-searching about whether it’s good enough yet.

You wonder too, whether the default critical sneer that greets any work that declares good intentions too loudly is also part of it. And whether that needs rethinking too. But that’s a delicate, possibly dangerous path to go down…