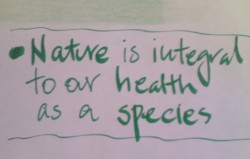 Usually, when I’m at a conference, and everyone is standing in a circle and talking about what inspires them, the participants are barefoot. With dreadlocks. Also, someone is making a giant pot of beans in the next room. This was not that conference. This was the “Healthy Parks, Healthy People” conference. The people in the circle were corporate VPs, non-profit directors, public health officials, and National Park Service Staff. And creative design thinking guided much of the process.

The concept of “Healthy Parks, Healthy People” is directly lifted from Parks Victoria in Australia. The idea is, basically, that nature is scientifically proven to be healthy for us, and so supporting parks is good for everybody. Parks Victoria Director Bill Jackson was in attendance, moving from group to group as we were all shuffled about to exchange ideas and brainstorm. As the chattering and shuffling went on, folks from the Grove Consultancy facilitated and drew giant illustrative doodles of emerging concepts. Like mind-mapping. Like some of us have done at other hardcore eco-conferences.

The doodles were helpful in visualizing commonalities. That’s a wordy way of saying there was a lot of common ground. There were collective calls for more research, pooled resources, branded messaging, and a reach out beyond the obvious perks of parks into the tree-less digital-screen-land most American kids live in.

This whole thing got started when the Institute at the Golden Gate created a “Parks Prescription” document, detailing non-profits across the country who were using park activities to fight obesity and diabetes. They connected with NPS director Jon Jarvis, and put the jumble of parks/health/environment people together at Fort Baker.”We need to create new partnerships,” said Jarvis in his opening remarks.

Done and done? In addition watching health insurance reps work in groups with uniformed Public Health Officers and green retailers, I ended up sitting in a group with an NPS staffer and the American Heart Association’s Ambassador of Play (yes!) discussing the possible benefits of a design competition. At the end of it all, Jarvis announced a Healthy Foods Strategy for parks, analyzing the nutritional value and sustainability of park food and creating requirements for concessionaires.

“How can we bring about a cultural change in which parks are valued not just as scenery, but as the untapped sources of healthy living that they truly are?, ” asked Jarvis at the start of the conference. It remains to be seen whether the gathering will be the catalyst for such a change. It has yet to involve the collaboration of known creatives like Presidio Habitats. But I did see one non-profit director working without her shoes.