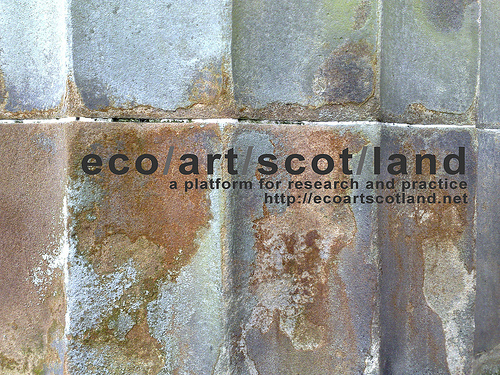 Two Calls for Papers that might be of interest to art and ecology practitioners and theorists – thanks to Michelle Bastion, Graham Jeffrey and Wallace Heim for the flag.

Abstract:
Alongside the well-established rise of citizen science and participatory democracies in co-production of knowledge, there has been an exciting parallel expansion in the use of creative and artistic methodologies for the production of, engagement with, and dissemination of knowledge about the environment. Building on this body of work, so often focused on human participants, this session addresses the ways in which contemporary geographical and art practices are brilliantly suited to explore expanded ideas of human and non-human ‘publics’ in the co-production of environmental knowledge. Thus, alongside artists enrolling lay or “non-expert” environmental knowings, we find other practitioners collaborating with the environment itself: for example with non-humans who are ‘big-like-us’, microbes which are not, and even with inanimate forces and environmental matters.

Within the ontological shift to a non-dualistic view of ‘naturecultures’, what can we learn from creative and artistic methods of co-production and engagement with the world around us? How might artistic practices help geographers and others to take account of the forces and matters of the ‘geo’?

Themes may cover, but need not be restricted to the following questions:

This session aims to showcase and learn from different practitioners using these ideas in research. Creative and participatory means of presentation are very welcome.

To Submit: Please send abstracts of 200 words to all conveners (Miriam Burke, Sasha Engelmann and Harriet Hawkins) by 14th February 2014.

Complicating the co-production of art: Hidden humans and acting objects

(Sponsored by the Social and Cultural Geography Research Group)

“Collaboration in art is fundamentally a question of cultural form”, John Roberts has claimed (2004: 557). By this he was bringing to attention that co-production in art is not a new phenomenon associated solely with the recent rise of socially-engaged or participatory art – rather that the production of socially-engaged art has become “a self-conscious process” (Roberts 2004: 557).

The creative process of participatory art has become a topic of increased intrigue in Social and Cultural Geography. Foci have emerged detailing its “messy materialities” and fluctuating social tensions (Askins and Pain 2011); its ability to create “senses of stability and belonging” (Parr 2006); and the art studio as an archival space “where things begin” (Sjöholm 2013: 1). More broadly, this geographical work on art can be seen as a move away from representational politics towards an understanding of art as a process constitutive of experience and meaning (Hawkins 2011). Despite this, however, geography’s attention to the intricacies of the co-productive processes of art has remained on relatively narrow grounds.

Drawing inspiration from John Roberts’ complication of the (co-)production of art, this session seeks to encourage geographers to expand their analytical lens to investigate the numerous actors and processes that go into the ‘co-production’ of art. Within this remit of actors and processes it seeks to draw attention not just to the human labour of art production, but also, alongside recent geographical attention to more-than-human publics and technological devices (e.g. Braun and Whatmore 2010; Dixon et al. 2012) the role of the non-human. In this light the session seeks papers that expand on both the understanding of the collaborative human work (e.g. technical staff, volunteers, gallery assistants, community groups, curators, researchers), and the role of the non-human (e.g. the canvas, the paintbrush, the gallery space, the gallery text panels, the raw materials) involved in the co-production of art.

The session will consist of five 15-minute papers with time for questions.