Nigerian theatre mixes oil and climate, on the ground 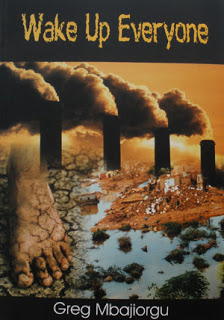 The Nigerian playwright and academic Greg Mbajiorgu got in touch with us after reading Robert Butler’s blogs on Ashdenizen on the difficulties of writing plays about climate change. Greg sent us his play, Wake Up Everyone, which has a preface quoting from this blog.

Wake Up Everyonebegan as a commission by the African Technology Policy Studies Network, Nairobi, Kenya for their international conference on climate change in Nigeriain 2009.

That policy world is represented in the main character, Maukwe Aladinma, a retired professor of agriculture, now attempting to get the local government in the rural Ndoli area to build flood defences and advising communal farmers on using organic waste and planting stronger, non-GMO seeds. The professor, too, is a dramatist. In a play-within-a-play, the actors of his theatre company rehearse scenes describing the effects of climate change, those happening now and those anticipated: rivers dried, torrential floods, tornadoes, plagues, famines and poverty. The surrounding scenes are of a naturalistic theatre style; the rehearsals are a play to be performed as if in a dream or possessed.

A local official, Chairperson of the Ndoli Local Government Area, Hon. Edwin Ochonkeya, blocks the building of the defences. When the threatened flood sweeps the land, the farmers become an angry mob, running off-stage to extract revenge on the official.

Greg’s writing is purposeful: to support impoverished farmers, to educate, to build resilience against the effects of climate change in rural Nigeria.

The depiction of the official, Ochonkeya, is what startles. His actions are presented as commonplace. A militant against the oil companies, he was on the verge of forming his own kidnapping gang when a massive oil spill damaged his family’s land and killed his father. He employed a lawyer to bring an action against the companies, who settled out of court for three hundred million naira and funded his campaign for local office on the condition that he didn’t make any further case on behalf of affected farmers. He won his campaign with the rhetoric of environmentalism: ‘Before this plague of climate change the oil companies had milked our land dry, but have given nothing to nourish it. All that is left (of my family’s farmland) is thick layers of oil, oil in our waters, oil in our wet lands, oil in our fragile soil, down to the roots of our edible crops, oil and more oil…’

And now, he is stopping any adaptation to or mediation of climate damage.

In a single character, the play conveys the immediate, turbulent, deceptive forces underlying oil production in Nigeria and in Canada, Baku-Tbilisi, Iraq, the Arctic, a world not wholly expressed by the activists against it, working across political boundaries.

It couldn’t be more topical. Last week, in The Hague, four Nigerians and Friends of the Earth began a lawsuit against Royal Dutch Shell Plc for  its environmental record in the in Niger Delta, a case that may set a precedent for claims related to the activities of international corporations.

And on Friday, Wake Up Everyone received a first Individual Award in Arts and Humanities Research at the 5th Nigerian Universities Research and Development Fair in Mina, Niger State.