Vol. 3 in the Cultura21 eBooks Series on Culture and Sustainability 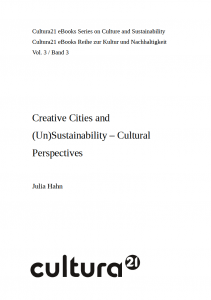 The Cultura21 eBooks Series on Culture and Sustainability presents findings from inter- and trans-disciplinary perspectives in research and practice. The eBooks are published openly online by Cultura21 Institut e.V. in order to support broad dissemination and to stimulate further debates in civil society and further action-research in the field.

The city today is increasingly conceptualized using terms such as ‘creative cities’ or ‘creative class’, stressing the importance of culture. The effects this can have on cities and neighbourhoods has been criticised from the wider field of sociology.  This critique can be examined and placed in the context of the analysis of a culture of unsustainability, in order to identify how the concept of creative cities may bring about unsustainable tendencies. Building on this, a re-conceptualization of creative cities, based on an understanding of the role of the artist in cultures of sustainability is possible. Rethinking terms such as creativity can help form possible frameworks, which support sustainable creative cities.

Cultura211 is not only an informal network. Its strength and vitality relies upon the activities of several organizations around the world which are sharing the vision and mission of Cultura21
Go to Cultura21

Artists and scientists will explore “Moving Perspectives – approaches to understanding water through geology, environment, art and society” at the Urbana Free Library in Illinois, October 13, 2009. The panel discussion includes George Roadcap, Illinois Water Survey; Cecily Smith, Prairie Rivers Network; Brett Bloom, artist and activist; Brigit Kelly, poet; choreographer Jennifer Monson; and moderator Michael Scoville, an environmental philosopher. The talk is part of Monsons Mahomet Aquifer Project, a series of public dance performances, workshops and a mobile gallery, October 10-18, to inform and engage the communities in East Central Illinois dependent on the aquifer and draw the audience into their own understanding of their relationship to water. Monson intends the iLAND project to “draw connections between our scientific and political relationships to natural resources and the cultural frameworks that shape our perception and relationship to these resources.”