Thanks to Aeneas Wilder, a Scottish artist living further North in Japan, Su Grierson has been able to give us a sense of the changes to the landscape further up the coast.  Once again she asked me to emphasise that she is only able to report what she is told and sees herself, and cannot verify anything.

One of the most impressive aspects of Japanese society is the degree of tolerance, support and respect that is shown both to foreigners and within their own community.  Partly this is a necessity in such a heavily populated country and also because of the practice of sharing their home with many generations of a family – as one person said ‘we don’t have much option, we just have to get along’. But it does go deeper than this with many traditional small actions of respect happening as an expected etiquette in daily life. While these can sometimes seem hierarchical and onerous to us they actually reinforce respect and usually have an inbuilt level of equality.

Decision making likewise tends to happen through group discussions which allow everyone to speak and seeks a consensus view.  Again to us with our western linear approach which often allows the strongest voice to become powerful, this consensus approach seems to be very time consuming and often ends without an apparent firm decision: it is circular and ongoing allowing for new opinions to come into play.  I can see the benefit of the system even if I find it difficult. However I am hearing from a number of people how it was this system that failed Japan at the time of the disaster in March 2011.  Such an unprecedented series of disastrous events need fast firm leadership and decision making especially when the good systems already in place to cope with normal tsunamis were overwhelmed by the scale of that one. And I am told that the Government of the day just didn’t have the mechanisms to cope.

Following on from this I have had several conversations now and on previous visits to Japan about the Japanese approach to Charity. After the disaster the Government initially declined international aid when they actually desperately needed it. In this society accepting charity is seen as diminishing your own status, and giving charity as placing oneself in a superior position and taking on an elevated status. Some people in Japan were questioned and challenged for wanting to help the refugees. “Why are you doing it,” and, “You are only doing it for you own glory”. What this society does do is support those around them socially and in their own family which is seen as a mutual situation offering no advancement or diminishing of status. We could learn much from that. However it does create a certain tightness in society and a worrying distancing from the concerns and issues of the wider world.

The Temple at Otsuchi after the 2011 Tsunami. Photo and permission Aeneas Wilder 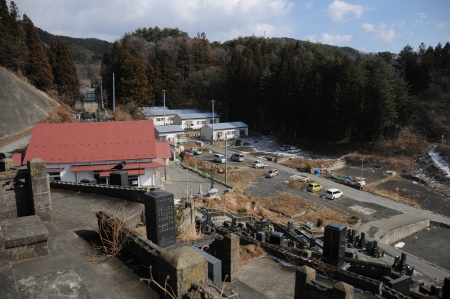 The Temple at Otsuchi (February 2013) Photo and permission Su Grierson

Last weekend I was invited to stay at the home of Scottish artist Aeneas Wilder and his Japanese wife Naoko and their children. They live near Hanimaki in Iwate Province, a three hour train journey north from Kitikata and much nearer the east coast. Aeneas kindly drove me through the mountains and out to the coast to visit the many areas decimated by the earthquake and tsunami.

He was also keen to revisit the area which still holds horror images and a memory of the smell that he was still needing to come to terms with.

This is a beautiful wooded, mountainous area with many small towns and settlements in all the coves and river mouth areas. The section we visited is repeated for many hundred of miles north and south of here. He told me the story of how only one small town survived undamaged. Many years ago the Mayor of this town had insisted on building the sea defence wall many meters higher than anywhere else had even considered. He was laughed at and his wall was the subject of jokes throughout his lifetime. After March 11 his town was the only one in the area where not a single person died. The very next day the local people began laying flowers on his grave.

Because there was no nuclear problem here it is possible for re-building to commence and a few people are doing so. However the sea defence walls have not even been mended let alone increased in size and one can hardly imagine that mortgages or insurance are possible. The fishery businesses whose warehouses were outside the sea walls anyway are all re-building at great speed. Building contractors in Japan are going to be over employed for many years to come. I have never seen so many diggers at work and doubt that private individuals could get a contractor even if they wanted to. 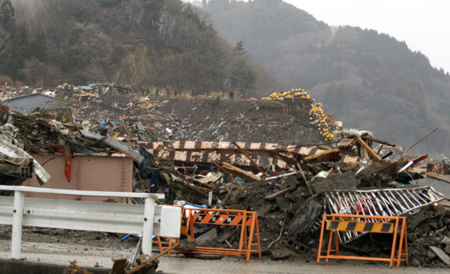 Near the Temple at Otsuchi after the 2011 Tsunami. Photo and permission Aeneas Wilder 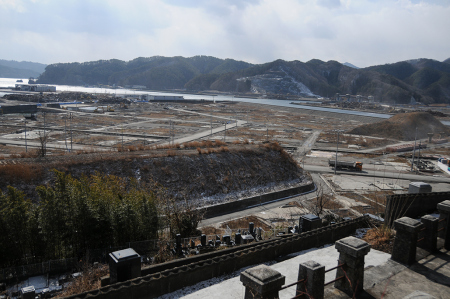 There are still huge mounds of debris at the wharf sides. There is no obvious sorting operation so I think they are being slowly loaded onto ships either for dumping or sorting elsewhere. I haven’t found out about that so far. 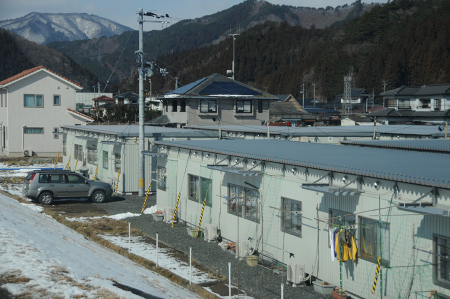 This area has a large number of refugee houses with people staying close to their localities, but it will surely be very many years before they are able to re-settle in their old locations. Also the stories about Government compensation for these non-nuclear refugees suggests that they will have very inadequate funds. I hear the stories but don’t know the facts.

Tsunamis have always been taken very seriously in this whole area with weekly rehearsals and hundreds of well marked high ground shelters designated. But many of these were also inundated this time with others escaping the tide by feet. In one area the tsunami went 8 km up a river valley which no-one had forseen. There was a 15 minute warning this time and most people reacted correctly. Without that the loss of life would have been catastrophic. Who knows why some people did not leave their houses? Would we leave if we had a bed ridden old person in the house? If our house had always been safe in the past? In some cases perhaps 15 minutes was just not enough time. Hospitals certainly did not have enough time to evacuate bed-ridden patients.

There are, as we might imagine, many stories of tragedy – the man who was safe but went to see if his wife was OK and was caught by the unexpected third tide. But also of survival – I am told the story that one lady recounted – when she felt the tremors a few days beforehand she had drilled her children that if the siren sounded, no matter what anyone else was doing, they must run up the hill to their school. As it happened they were at the school anyway when the tsunami came. She, on the other hand, was driving back on the motorway from another area and as she reached her town she and all the other cars were swept off the road and into the raging soup of debris. As her car was sinking the windscreen was hit and broken by a concrete electricity pole. She undid her seat belt and pushed out through the hole. She was instantly swept up into the racing debris, but eventually managed to climb onto a floating wardrobe. As she was swept in towards the hillside she tried to scramble up onto a wall but couldn’t because of the thick mud. Some people saw her and ran back to help and after several attempts managed to grab her and drag her up. In a totally dazed state she ran up the hill where she found her children safe. A few days later she went back to see if her car was still there and was met by security officers who told her that she was mistaken, her car couldn’t possibly be there because everyone in those cars had died, they had just finished removing the bodies. She was the only survivor. She reputedly told this story in a completely un-emotional way. She understood it was just one story among many.

Food contamination is another issue I have tried to ask about. Generally the first Government caesium testing figures were not trusted as most people seem to consider that Government is too tightly allied to big business who might be exerting pressure to falsify the figures. However there were many independent tests made in Japan and in other countries around the world which have indicated that with a few early exceptions which were dealt with, the levels pose no serious risk. This has produced two kinds of response. There are those who make a point of buying local food to support the beleaguered farmers and those who buy from the furthest away sources as possible, trusting foreign food above Japanese. Generally though I haven’t seen any particular paranoia about radiation anywhere locally. Life just goes on as normal – but without the tourists whom they so desperately need.

Images from the Residency can be found on three Facebook pages: