Beyond the Horizon at Deutsche Bank NYC 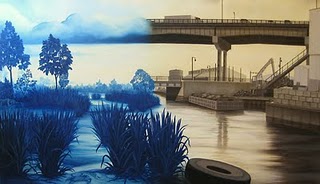 Beyond the Horizon explores contemporary views of nature and habitat expressed through the tradition of landscape painting and drawing. Fourteen New York-based artists in Beyond the Horizon envision specific places from perceptual, historical and conceptual perspectives while at the same time they record the ongoing evolution of human interaction upon the environment. Previously held notions of nature vs. culture have changed for the 21st century and it is increasingly clear that all of life is one interconnected and interdependent system. Underlying the works in Beyond the Horizon is an acute awareness of environmental issues such as climate change, overpopulation, habitat changes, recycling, waste disposal, and reclamation. Some of the artists are committed to merging their art with action and implementation, while others are more interpretive. Using realism, fantasy or process as a source for imagination and transformation, they seek to create an awareness of loss and beauty in the marginal, the overused and the threatened.

Exhibition tours, an opportunity to ‘Meet the Artists’ and a panel discussion are planned