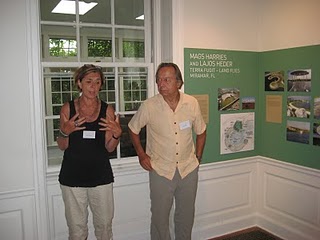 The exhibition design provides each artist or artist team with a large wall presentation including text, photographic images, documentation and in some cases videos. It’s graphically crisp and clear to look at if somewhat bookish. Curator Jennifer McGregor explained to me that the entire exhibition will be very easy to travel as everything is designed on computer files that can be sent without shipping anything. Nice to see a “green” show with a green concept for travel! This exhibition focuses on current or recently completed projects with a few exceptions. 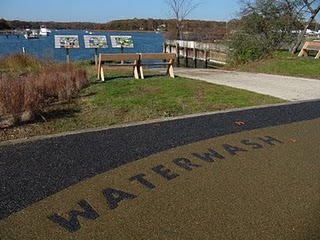 Several of the artists were there for the opening and gave brief talks about their work. First to speak was Lillian Ball about her completed project WaterWash which is made of recycled glass, permeable pavement and vegetation to replace asphalt to act as storm water mitigation in Southhold Long Island, NY. She also presented an architectural model as a proposal for a new version of WaterWash for the Bronx River.

Buster Simpson then spoke about his work titled The Monolith in Redding, CA. This work was commissioned by Turtle Bay Exploration Park and created from the ruins of a former gravel plant and the building of the Shasta Dam. Simpson has proposed a water recirculation system and large solar panel for the rooftop of the structure.

George Trakas spoke about his Newton Creek Nature Walk in Greenpoint, Brooklyn. He created public access to a long-inaccessible shoreline surrounding the Newtown Creek Wastewater Treatment Plant. Trakas’ Nature Walk provides an interpretive frame on its surroundings. From staged granite steps to the water’s edge, visitors can sit on a series of getdowns perforating the bulkhead along the Whale Creek tributary.

Mags Harries and Lajos Héder, presented Terra Fugit. This project provided an opportunity for the artists to fully design a section of a new regional park in a fast growing, completely new community in Miramar, South Florida. The design explores the nature of the land, time, and human occupation and development on a 200-acre site located near the Everglades. This area was still open wetlands in the late 90’s and the waterway, excavated to obtain fill material for raising the grade of the surrounding site, has become the central focus of the park. 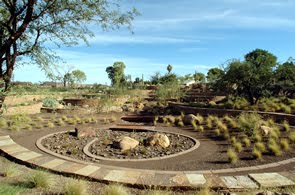 Lorna Jordan, spoke about her project Terraced Cascade in Scottsdale, Arizona. The work consists of a series of stepped, rib-like terraces and vertebrae-like cascades. Water flows down the cascade in a metaphorical gesture that suggests water rolling down a human spine—a miniature watershed allows storm water to supplement the irrigation system. Planted terraces provide a demonstration of desert-conscious landscaping and the sculptural garden is an abstraction of the human body in the desert landscape. The artwork’s objective of creatively using storm water is sensitive to the need for harvesting, using and reusing water in an otherwise dry region. 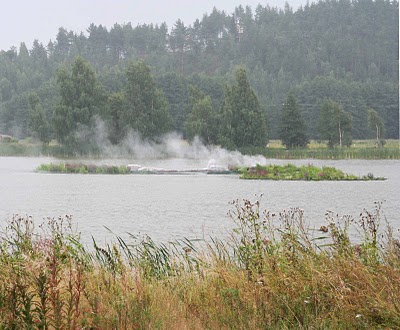 Jackie Brookner presented her recent project, Veden Taika, The Magic of Water. The work consists of three floating islands in the Halikonlahti Bird Pools in Salo, Finland. The largest island provides nesting sites for birds and the two smaller islands contain plants for phytoremediation, These islands are vegetated with plants specially chosen to remove pollutants from the water and sediments. During the warm months a cloud of mist, powered by wind, will rise up over the islands several times a day. Wind powered aerators beneath the islands oxygenate the water and stimulate microbial processes on the plant roots. 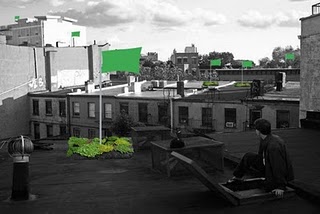 Eve Mosher, then spoke about her current project, Seeding the City, in NYC which utilizes social networking to site urban interventions in the form of green roof modules. It capitalizes on community building to introduce urban environmental issues and remediation tools. The modules and their accompanying flags and street level signage will track the growth of the network throughout the neighborhood. Online resources will include mapping of the project, tools for tracking local urban heat island effect and resources to recreate the project worldwide. ecoartspace participated in Seeding the City last fall as part of the exhibition Down to Earth at 53 Mercer St, NYC, we had four of the original planted roof modules on view.

Last, but far from least, Mierle Laderman Ukeles spoke eloquently about her ongoing decades of work with the Fresh Kills Landfill in Staten Island, NY. As the official artist in residence of the NYC Dept. of Sanitation, Mierle has been involved from the beginning in the plan to transform Fresh Kills Landfill into a public park. The park will eventually have four sections, and will be twice the size of Central Park. Mierle suggested that it might take another 20 – 30 years before the park is completed. (In the same breath she mentioned that she is now 70 yrs old). The average time period for all of the works represented in Remediate/Revision from inception to completion was 10 years. Mierle is an inspiration in her dedication and perseve 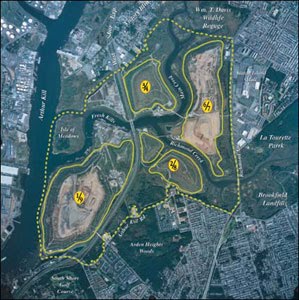 rance as are all of the artists in this exhibition that take on large-scale public remediation projects as art.

Meanwhile, Mierle has a proposal soon to be implemented for one million people to participate in an artwork for Fresh Kills Park titled PUBLIC OFFERINGS MADE BY ALL REDEEMED BY ALL, where “Donor Citizens” will release material offerings via cultural transfer stations. Stay tuned for more information on that as well as on upcoming events at Wave Hill associated with this exhibition.

Remediate/Re-Vision is up at Wave Hill through November 28, 2010.

The “Recycled Comedy” Exhibition showcases replica costumes from past productions that have played at the theatre made entirely from recycled and recyclable materials. Each costume sits in its own ‘environment’ which is complemented with light and sound. For the past month front of house, management, crew and box office staff at the Comedy Theatre have been working hard to develop and realize the exhibition which promotes recycling and raises environmental awareness.

Rylance, who has a strong interest in environmental and recycling issues, won two Olivier Awards with his roles in MUCH ADO ABOUT NOTHIN and JERUSALEM. He was also honored with a Tony Award for BOEING BOEING. He served as the Artistic Director of the Shakespeare Globe Theatre from 1995-2005.

The Comedy Theatre is owned by the Ambassador Theatre Group (ATG). ATG is committed to achieving the highest standards of environmental performance, preventing pollution and minimising the impact of its operations on the environment.

ATG believes it is both good business practice and our duty to protect natural resources and therefore aim to conserve energy, water, wood, paper and other resources – particularly those which are scarce or non renewable. ATG also aims to reduce waste through re-use and recycling and by using refurbished and recycled products and materials where such alternatives are available.