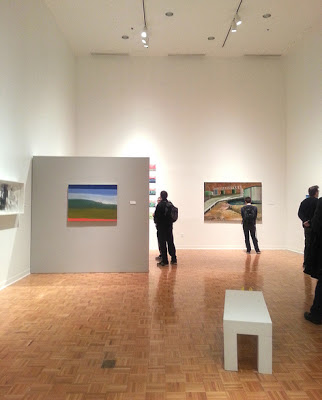 Taken from a 1987 song by the band R.E.M., It’s the End of the World as We Know it (and I Feel Fine) this somewhat ironic title suggests the possibility that by avoiding complacency and with awareness, intelligence, compassion and activism, solutions to environmental problems will be found to avoid potentially catastrophic results. The works attempt to meet the challenges of the new ecological imperative by bringing attention to the viewer of the need for protection, preservation and action.  Artists often have a prophetic role and throughout history have alerted us to problems that are unforeseen or overlooked. Using realism, fantasy or process as a source for imagination and transformation, they seek to create an awareness of loss and beauty in the marginal, the overused and the threatened.

Images of the exhibition taken by Joy Garnett can be seen HERE. 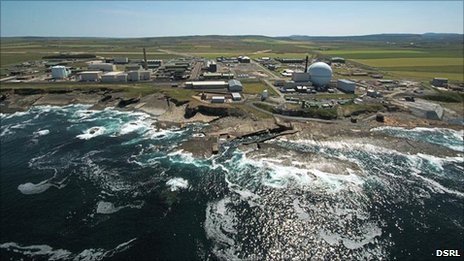 Artists have been working with the cultural and environmental dimensions of nuclear power for a long time.  Many have also been anti-nuclear activists as well.  The artists want to raise awareness and contribute to the public discussion.

This work isn’t facile or simple, and drawing attention to it is done in a spirit of respect for the people currently working to minimise the impact of the disaster at Fukushima.

Gair Dunlop is launching his film Atom Town with a tour including Inspace at Edinburgh University 27/28 May, Caithness Horizons, Thurso, 3 June and Arts Catalyst, London, 23 June.  There is a short ‘sketch’ on Vimeo:

Dounreay Atomic Research Establishment (official website for decomissioning) is a sprawling monument to solidity, optimism and analogue engineering. The intangible alchemies and sense of romantic science at its heart are trapped like amber in archive film and in its colossal structures. Over the last two years, unprecedented access to the facility and to the UKAEA Archive at Harwell have allowed Gair Dunlop to explore the dream and the consequences of high science in a remote community.

Eve Andree Laramee has successfully secured funding through UnitedStatesArtists.org amongst other sources for her film/video project Slouching Towards Yucca Mountain.  Yucca Mountain in Nevada is a proposed nuclear waste repository.  This work in development is about another aspect of legacy.

She has also posted some initial character sketches on youTube:

But each of these artists has their own personal history with nuclear activism. Sitting with Lorna Waite discussing art and nuclear activism I discovered that the reason she didn’t get to be Civic Week Queen in Kilbirnie when she was 16 was because she asked “What exactly is a safe container for radioactive waste?”  She went on to an action to disrupt a meeting of the Committee on Radioactive Waste Management – she took some sand from Dalgety Bay in a lead-lined container and a home-made Geiger-counter to the meeting.  Dalgety Bay is polluted with radioactive waste because the luminous dials for WWII aircraft have ended up there (download an NHSFife document on the subject).  She then went on to talk about the assassination of Willie Ross, an SNP activist who had been working on legal arguments against Nirex and their plan to do test drilling in the Scottish Highlands in preparation for developing a nuclear repository. 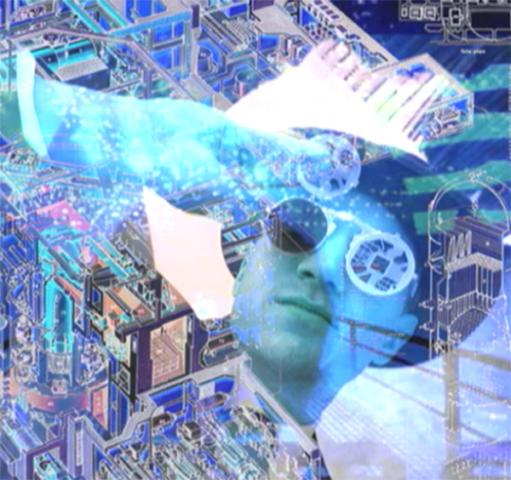 A cast of nineteen fictional characters explore the post-Atomic Age West in this video installation, Slouching Towards Yucca Mountain. Funds in the amount of $9,500 are sought for video editing, completion of an installation and creation of an artist book/exhibition catalog.

The project explores issues and ironies surrounding the problem of radioactive waste disposal in the United States. The non-linear narrative of Slouching Towards Yucca Mountain involves time travelers who discover these tunnels and question the use and misuse of the so-called “empty wastelands” of the American West.

Using tropes and clichés of the Western film and science fiction film genres, a subtext of environmental exposé unfolds in a suspenseful talk: part fact, part fiction. It is set in an ambiguous time period – unstuck in time – partially 19th, 20th and 21st Century.

The project reveals American values and beliefs about nature, conquest, ownership and the use of land, and environmental justice issues. It does so with a mixture of creativity, humor, and dead seriousness.

With your support I will produce twenty 1-3 minute long video loops: one for each character plus an introduction. The video loops will be incorporated into a series of video sculptures within a room-sized installation.

During a residency at the Goldwell Museum 15 miles from Yucca Mountain, thousands of still phtogrpahs and hours of video footage were shot in Death Valley, CA and the ghost towns of Rhyolite and Goldpoint, NV. During the preliminary project development I worked with former students and emerging artists, Courtney “scrap” Wrenn, Chelsea Noggle, Michel Tallichet, Mia Ardito, Emily Montoya and Benji Geary.

As an interdisciplinary artist who has worked at the confluence of art, science and nature for over twenty years, I feel a responsibility to examine environmental issues and ecological problems through my research and work. This is where my aesthetics and pedagogic ethics merge; I want my work to contribute to future generations.

In 2002 the U.S. government began developing Yucca Mountain as a deep geological repository for high-level radioactive waste. Due to geological faults, and climate uncertainties, the project was terminated; however a maze of excavated tunnels exist beneath the mountain. The U.S. currently has no master plan for permanent disposal of radioactive waste; it is in temporary storage at hundreds of sites across the country. This environmental problem has hardest hit the indigenous peoples of the Western desert lands. I want to raise public awareness, involve communities and initiate discussions through my work.

So you want to make radical work about radiation waste, for example, and whilst you write grant applications, you also want to build interest around the work, and avoid reliance on ‘committees’ effectively giving you permission to make the work by waiting for a grant to be approved.  You are an artist first and fund-raising is a task, not an occupation. 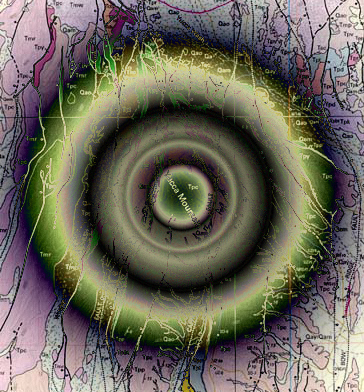 This is the second really interesting project which a US-based artist has brought to my attention through the crowd-source fund-raising mechanism of UnitedStatesArtists (the other one was Suzanne Lacy’s The Performing Archive).  These are projects where the support is in the form of publicity, and sometimes match-funding.  (UnitedStatesArtists also offer Fellowships to selected artists.)  I suspect that to benefit from this site you still have to apply and in this case the money comes from your own list of contacts.

The UnitedStatesArtists web site says a few of interesting things,

All donations simultaneously support artists’ projects and the nonprofit mission of USA. The site is built on a joint fundraising model: 81% of every dollar pledged goes directly to the artist’s project, and 19% supports USA’s programs for artists and the site’s administration.

But it also says,

United States Artists has created a structure to identify America’s finest artists and to grant money to them in an efficient manner. Thanks to the generosity of its founders, USA’s operating expenses are fully funded for the next five years. This means 100% of donor contributions are directed to the artists we support.

Our horizon line is not three, five, or 25 years, but rather 100 years and beyond. We are building a program that is privately funded, prestigious, and permanently endowed.

Historically, public support for the arts and artists is unstable and unreliable; therefore USA will accept only private contributions.

And it doesn’t say,

Eve’s project is excellent and you really ought to support it: even $25 makes a difference.

No fund-raising is without hard work.  This is another approach to the problem.  It does make it more personal rather than remote and bureaucratic.  I do want this project to happen, and I did want Suzanne Lacy’s to happen, so I did contribute.  Art may belong to a ‘gift’ culture, but where does the gift come from? 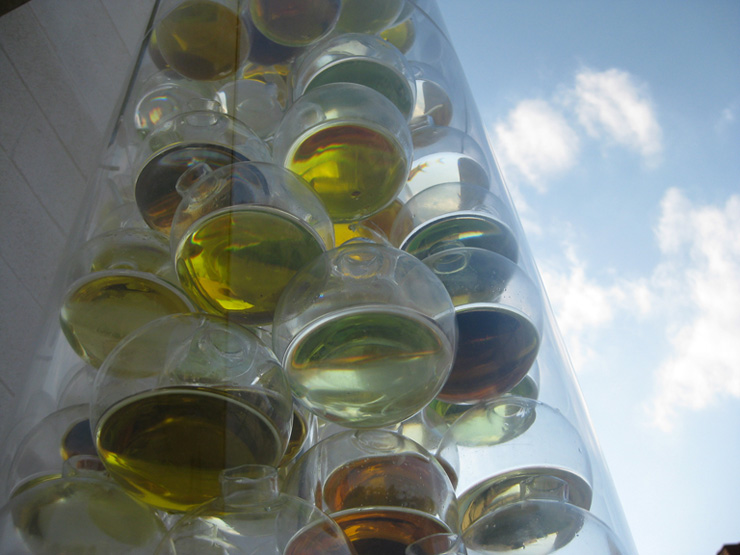 Agents of Change is a panel discussion focusing on five artists who explore issues of sustainability and ecology, often to create community-based or public art projects. Their work sits at the nexus between art, life, science, and nature and finds direct, effective ways to engage its viewers. These artists use diverse methods–including dialogue and interaction—to deal with everyday life situations and solve real-world challenges. They often work collaboratively on multi-disciplinary projects that include scientists, ecologists, botanists, landscape architects, and engineers to create large-scale works or interventions in the social sphere. This discussion will focus on their intention to activate the public into making positive changes in their own lives and communities. 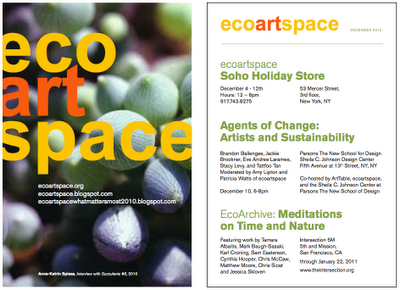 open from noon to 6pm

Come do your holiday shopping at the ecoartspace office in Soho! We will be exhibiting the remaining artworks donated to our Spring benefit What Matters Most. Works can also be viewed and purchased online HERE and are ONLY $150 each. We will also have additional prints, books, stickers and select paintings and sculpture. Perfect holiday gifts!

AND, on December 10th Amy Lipton and Patricia Watts will moderate a panel discussion: Agents of Change: Artists and Sustainability focusing on five artists, Brandon Ballengee, Jackie Brookner, Eve Andree Laramee, Stacy Levy, and Tattfoo Tan who explore issues of sustainability and ecology, often to create community-based or public art projects. Their work sits at the nexus between art, life, science, and nature and finds direct, effective ways to engage its viewers. These artists use diverse methods–including dialogue and interaction—to deal with everyday life situations and solve real-world challenges. They often work collaboratively on multi-disciplinary projects that include scientists, ecologists, botanists, landscape architects, and engineers to create large-scale works or interventions in the social sphere. This discussion will focus on their intention to activate the public into making positive changes in their own lives and communities.