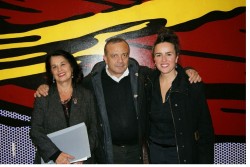 The encounter with Giovanni Impastato, his touching story and his plea for a nonviolent and democratic society have moved the students at the University Düsseldorf as well as the mainly italian audience at the Fimhaus Cologne. After the book presentation of two hours, Giovanni Impastato and his guests continued their conversation with a glass of wine.

The presentation was organised by Prof. Vittoria Borsò and Aurora Rodonò of the Institute for Romance studies at the Heinrich-Heine-University Düsseldorf in cooperation with Cultura21 (Davide Brocchi) and the Filmhaus Cologne.

It is the 34th session of UNESCOs General Conference in October 2007 that decided the Second World Conference should take place as soon as possible and accepted the invitation of the Korean Government to host this event.

Following the ongoing preparation through numerous initiatives across the world, this conference in Seoul aims to promote and to reinforce the value of quality arts education for all, in developing a capacity for creativity in the 21st century for youth and all generation.

The significance and value of arts education has already been underlined and expressed in the “Road Map for Arts Education”, resulting from the First World Conference on Arts Education held in Lisbon, Portugal, in 2006. It is now the time to focus on encouraging the implementation of the “Road Map”. Furthermore, this new global encounter in Seoul of art education actors will target to highlight the socio-cultural dimensions of arts education and reinforce research and knowledge of practices, ensuing from new conceptual and methodological tools.