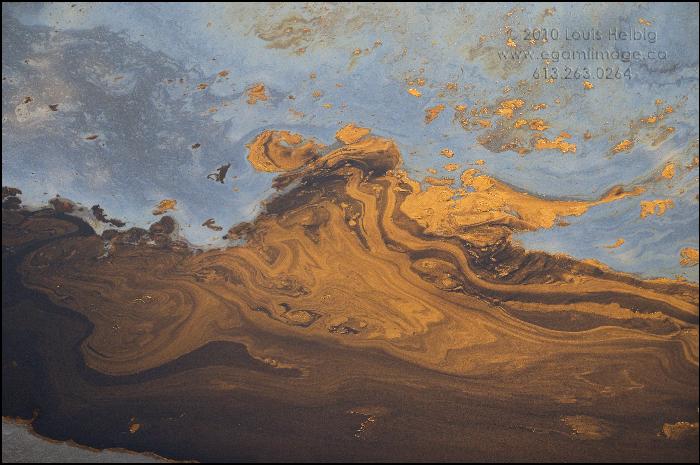 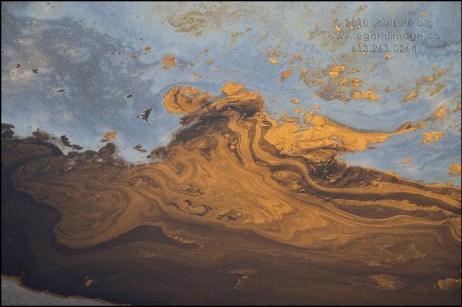 Louis Helbig’s talk on his project Beautiful Destruction yesterday afternoon at Edinburgh College of Art brought together some interesting elements: environmental destruction in remote northern Alberta, national economic benefits, the role of the arts, the relevance of this to Scotland, Jim Hansen’s arguments about tipping points in climate change, the need for civic discourse and the uses of restorative justice techniques.

Louis presented on the Alberta Tar Sands highlighting the scale of the environmental and economic impact. The Tar Sands cover something like an area the size of England. There has been an investment over the past 10 years of something like $300 billion into this industry and investors represent every country in the world with an active oil industry. Canada has derived a massive economic benefit from the Alberta Tar Sands allowing it to ride out the global economic crisis and become an oil exporter.

Louis articulated his interest in the Alberta Tar Sands coming from the experience of flying, with his partner Kristin Reimer, over the workings and being amazed at the scale, whilst also being astounded at the lack of civic discourse in Canadian society. He described the polarisation of debate in Canada between the environmentalists and the industrialists, and he offered a critique of the environmentalists in terms of their lack of engagement with the subject over an extended period during the development of the industry. Canadian environmental NGOs have, according to Louis, largely ignored the Tar Sands until recently.

Scott Donaldson, Portfolio Manager at Creative Scotland, reminded us that Jim Hansen,  recently retired Director of NASA’s Goddard Institute for Space Studies and one of the foremost scientists and more recently activists has specifically highlighted the development of Canada’s Tar Sands as a key indicator. Scientific American said this year,

His acts of civil disobedience started in 2009, and he was first arrested in 2011 for protesting the development of Canada’s tar sands and, especially, the Keystone XL pipeline proposal that would serve to open the spigot for such oil even wider. “To avoid passing tipping points, such as initiation of the collapse of the West Antarctic Ice Sheet, we need to limit the climate forcing severely. It’s still possible to do that, if we phase down carbon emissions rapidly, but that means moving expeditiously to clean energies of the future,” he explains. “Moving to tar sands, one of the dirtiest, most carbon-intensive fuels on the planet, is a step in exactly the opposite direction, indicating either that governments don’t understand the situation or that they just don’t give a damn.” 23 Jan 2013

Hansen’s argument makes Canada’s tar sands everyone’s business, but the issue of energy and land is one where Canada is only an extreme example.  This point was raised by Gemma Lawrence of Creative Carbon Scotland.  Harry Giles, Environment Officer for Festivals Edinburgh noted that there are a significant number of applications for open-cast coal currently before the Scottish Government, as well as numerous applications for major renewables installations. All of these, for better or for worse, are driven by our addiction to cheap energy, and politicians commitment to “keep the lights on.”

Louis kept emphasising the need for a civic discourse, rather than throwing stones at each other from extreme positions. There was a sense in the room that this was an unusual position for an artist to take. Are we more used to artists aligning themselves with environmental campaigners, than trying to open up a centre ground that enables all parties to engage in the discourse?

Louis kept returning to the experiences of speaking with individuals who worked in the industry, electricians or truck drivers rather than corporate executives, and how they, when faced with an artists’ representation of the beautiful destruction, articulated their own conflicted views.

Although it wasn’t raised in the formal discussion, the idea of restorative justice was also present, and perhaps needs to be explored. Kristin Reimer, Louis’ partner, is currently in Scotland to research restorative justice programmes in Scottish schools. Restorative justice is broadly speaking an approach that seeks to address the needs of both the victims and the offenders. It provides a space in which offenders, including those who have committed the most serious crimes, can be confronted by their victims. It is not a space of stone-throwing or media manipulation.

Given that we are all implicated in the self-destructive culture of cheap energy (even if energy doesn’t necessarily seem cheap in Scotland at the moment) do we not need the means by which to face each other, and talk about the problems, not as a soft option, but as a way to see that we all benefit economically from cheap energy and we all need to change our ways.