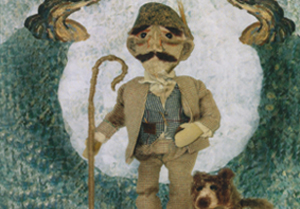 The Man Who Planted Trees (Seminar) at WSD2013 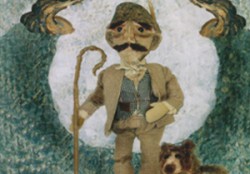 The Man Who Planted Trees was awarded the 2012 CSPA Fringe Festival Award for Sustainable Production and the 2007 Eco Prize for Creativity.

The company will share their experience of creating and touring the show, conscious how lightweight set design, reuse and recycling, low-impact lighting design, backstage chat at countless venues – plus the power of a great story – has helped them to be sustainable not only in environmental terms but also as individuals working together over the last 7 years.

We’re revisiting our syndication partners at the CSPA to best reflect the changing field of sustainability in the arts. We are excited to welcome eco\art\scot\land. 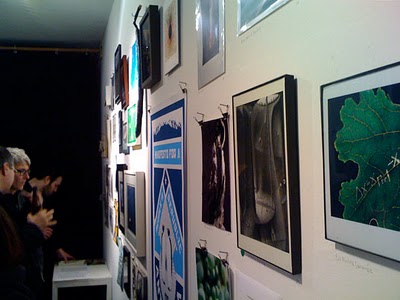 CLICK IMAGE TO GO TO ARTICLE BY ABIGAIL DOAN

Matthias Merkel Hess of Eco Art Blog has a New Project, looking for your help! 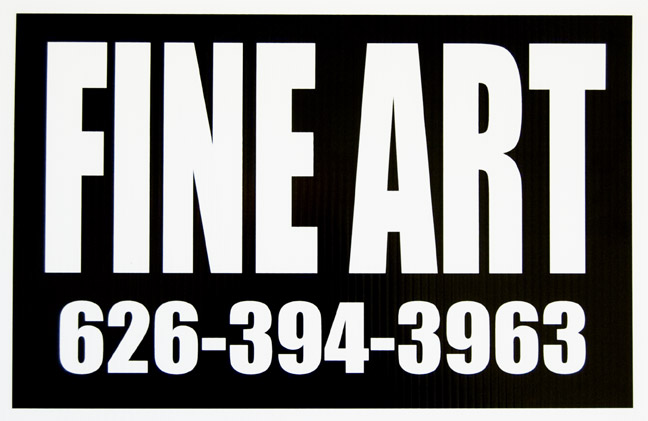 I haven’t been posting on the Eco Art Blog recently; as I’ve said before, others are doing a better job at that than I have the time for. Also, the end of grad school has piled on a lot of time-consuming activities, like mounting a thesis show.

But I am happy to announce a new project I’m working on at the 18th Streets Arts Center in Santa Monica, California. It’s called Fine Art 626-394-3963, and I’m inviting you to call or email me to talk about art and what you want from artists and the institutions that show art work.

The project really needs your participation, so I hope you’ll call or email. For more, visit the project blog at fineart6263943963.blogspot.com. 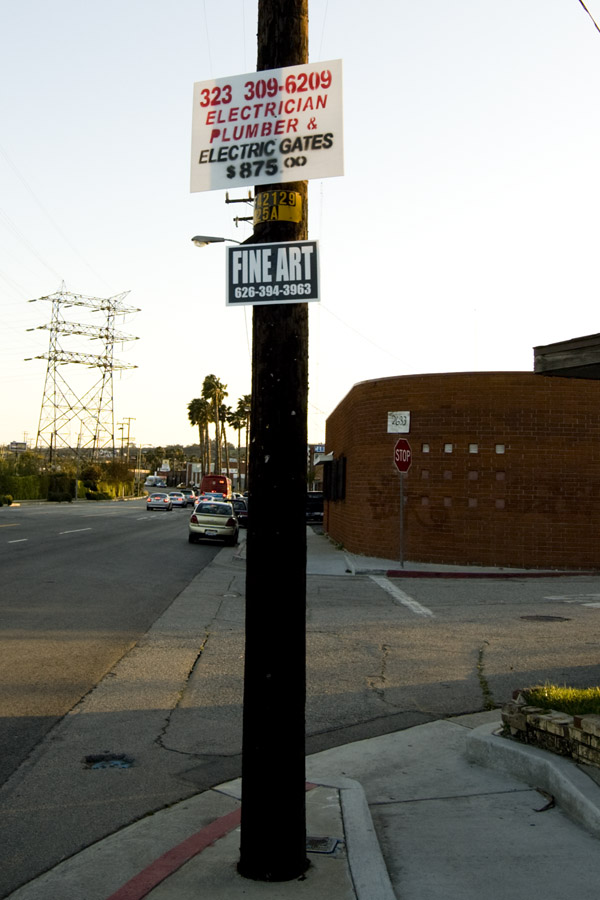 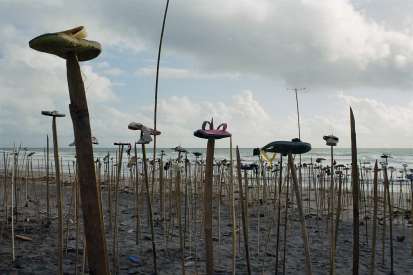 We are accepting proposals for three sections of the 3rd BBIEAF 2010 to be held in Daet, Camarines Norte, Philippines from May 30 till June 6, 2010. On its third iteration, the BBIEAF is still a community-based art festival that links up Art, Environment and Sustainability. The three main divisions are Installation Art, Video Art and Public Furniture. Artists are immersed in their respective adoptive communities, and together with the members of those communities, construct large-scale bamboo installations on the beach. Video artists will have their works shown in and around the town of Daet.

Interested artists can send a sketch of their installation proposal as well as their CV, or in the case of video art, a clip of their videos and a CV, and in case of the public furniture, a sketch  and a CV. 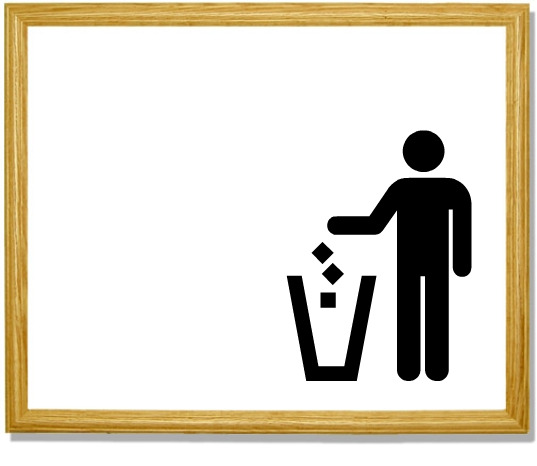 1. Rock Stackers. Your skills are amazing. You can stack rocks higher and prettier than I ever could. You’re even kinda like Andy Goldsworthy, yes, of course. And I’m sure the process is amazing for you, and that the stones talk to you, and you get that beautiful in-tune-with-nature hum.  But I’ve see so many rock stacks at this point they blur together. My eyes glaze over.

2. Tr-art. This is a combination of terms: “trite trash art.” Thank you for rescuing all of those bottle caps, six pack rings, and other crap from the landfill. Thanks for making them into portraits, blankets, sculptures and people. Trash is now a viable medium. But you are not always making eco-art:  sometimes you just happen to make art with trash. Conversely: just because you made it with trash doesn’t mean it is powerful art.

3. Statistic-a-thon. Recycling one can saves enough power to watch 6 episodes of Law and Order. At this rate all of our children will be dead in 20 years. We need 16 more planets if we want to keep watching Comedy Central. Etcetera, etcetera.  I am so inundated with guilt-soaked statistics. Stop finding new ways to slap me in the face with them. If it’s powerful to you then help me understand why. See: Chris Jordan, who does an excellent job of making numbers real.

4. Eco-Snobbery. As a recovering eco-snob myself, I understand how hard it is to stop calling everyone out on their perpetual green sins. It sucks. There are to-go containers everywhere, and everyone drives, and not everyone composts, and what the hell?!?! The icebergs, people! The icebergs! But just because you make eco-art does not mean you have license to aggrandize. We’re a population of pots and kettles. Don’t mistake your good work for a kind of personal superiority. This is true of green culture in general, but it’s especially apparent in accusatory or guilt-trippy art.

The Arcola Theatre in Hackney aims to relocate to a 2,000sq m site next to Dalston Junction station and create a 350-seat theatre built of sustainable materials including straw bales and doors salvaged from skips.

Engineer Arup has given 18 months worth of pro bono work for the proposal while the London Development Agency has awarded a £60,000 for a feasibility study subject to Hackney Council approving the site.

The overall concept, which can be scaled up or down according to how much money is raised, includes an expanded main theatre with two smaller studios, an eco café, gym, learning centre and park.

A key element is an enterprise centre with offices and laboratories for entrepreneurs and technology and product design firms.

Arcola chief executive Ben Todd said the feasibility study could be completed by December, with work on the new theatre starting in 2010 and completing in 2012.

Todd, who trained as an engineer, said: “The theatre will literally be built from straw bales, rendered to pass fire regs and be weather-proof.

“Doors from old schools and hospitals that don’t match are a nice example of the reuse, recycle attitude and are important to the texture. If we end up using steel and if most of the project comes after 2012, it would be a nice idea to recycle some of the Olympic stadia.”

Hackney Council is due to discuss the plans next week.

Video games exist for improving brain fitness, financial planning, and learning dance routines, so why not for sustainable living? The field of video games that teach sustainability strategies appears to be slowly blossoming.

Well we have to be doing something right, because McKie’s article got this response from factually wayward Daily Telegraph young fogey James Delingpole, lambasting “eco-luvvies”. It’s a conspiracy! froths Delingpole:

What Cape Farewell does brilliantly, Delingpole fulminates, is breed wave after wave of high profile propagandists for the authorised Al Gore/James Hansen version of man made climate doom.

Well we have to be doing something right, because McKie’s article got this response from factually wayward Daily Telegraph young fogey James Delingpole, lambasting “eco-luvvies”. It’s a conspiracy! froths Delingpole:
What Cape Farewell does brilliantly, Delingpole fulminates, is breed wave after wave of high profile propagandists for the authorised Al …