ashdenizen: flowers on stage: the lotus 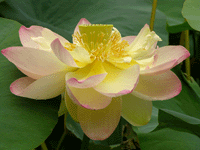 In the third of our summer series of blogs about flowers on stage, Satinder Chohan, writes about the lotus.

Lotus Beauty is the working title for a play I’m writing about the lives of different generations of Asian women in Britain. The play is set in a ladies beauty salon in suburban London.

Early in the play’s development, while grappling with notions of ‘beauty’, I took a walk around my neighbourhood in Southall, West London. In a small park, in a dilapidated, brown-edged pond, a beautiful white lotus stood elegant and poised, rising above half-submerged carrier bags, cigarette butts, beer cans and smack needles in the murky water. The suburban lotus inspired my ideas for the play.

Like the rose of the West, the lotus of the East is imbued with myriad cultural and spiritual meaning. The lotus is deeply rooted in Eastern mythology and religion, Buddhism and Hinduism in particular. Using the lotus symbol, I wanted to write about a spiritually bankrupt 21st century British-Asian suburbia, increasingly obsessed with external beauty and the physical self, consumed by ego, money and materialism.

I asked my mother about the lotus in rural India. As a child, she used to pop lotus seeds with her friends, eating them like popcorn. Lotuses used to spring up in flooded fields in her village. As frequent drought and new development swallowed up ponds and swamps, few remain. Her lotus-eating anecdote led me to Homer’s Odyssey and Tennyson’s 1832 poem The Lotos-Eaters. In both, the Lotophagi people eat a soporific plant that ‘so overpowered them with languor, they felt no inclination to leave, or anymore a desire to pursue the journey homewards’ (Odyssey). I imagined how people gorge on money, not lotuses, that have risen from the murky swamps of Britain, leading to apathetic lives, disconnected from nature and one’s environment.

For the women in my play, the lotus eventually blooms in trapped lives – the lotus reminding us that untainted beauty can indeed rise from earthly mud.