There have been a bevvy of eco-theater conferences in recent years, but it’s great to bring it all together with Earth Matters on Stage, which took place this past May 31st-June 2 at Carnegie Mellon in Pittsburg, PA. It included a collection of performances, presentations and panels covering everything from carbon footprint to eco-dramaturgy. Session titles included: “Sustainable Design,” “Ecocriticism & Contemporary American Theater,” and “The Carbon Footprint of Theatrical Production,” among many others. That last one was by CSPA’s Ian Garrett, and involved discussions of all the usual players: Arcola Theatre, Julie’s Bicycle, the Broadway Green Alliance . . . Discussions of sustainable design carried throughout the festival and bled into discussion of performance throughout the weekend. Again and again: how do we make theatrical production more sustainable? How do we incorporate or cultural dialogue with the planet into the work? How do we make work that goes beyond “being less bad” into something that actually has a positive impact on the environment?

Below are a selection of photos from the event. Keynote speaker and performer was Holly Hughes, one of the NEA four, whose most recent work (“The Dog and Pony Show: Bring your own Pony,”) examines her relationship with her pets. Ecodrama Playwright competition winners this year included Chantal Bilodeau, whose work “Sila,” explores a cultural cross-section of inuit culture, scientific researchers, and polar bears, and Mark Rigney, whose play, “Bears,” depicts a slow deterioration of civilization through the intimate stories of a group of zoo-bound bears.  The work of Earth Matters founder Theresa May was ever-present in the discussion on eco-dramaturgy, and the weekend ended with a discussion of conferences past and future. The dialogue continues, as we discuss and discover more ways that our set of skills can serve the environment. 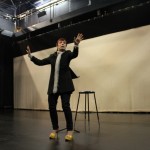 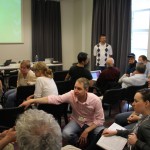 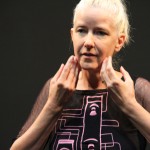 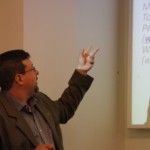 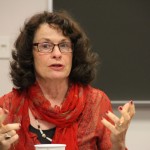 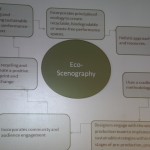 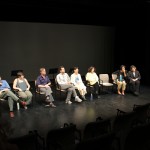 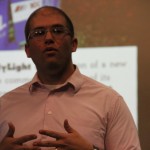 I’ve worked in theater in some form or another since high school. I have had a bad habit throughout my life in theater of being the type who says (or at least thinks) “I don’t want to go watch theater, I see so much of it from backstage, from the booth, I see it in rehearsals all day long…” So, I don’t sit in the audience much.

Now, because of the illness that blindsided me over a year ago, I really feel like a spectator sitting in the audience watching the future of green, eco-responsible theater rushing by in flashes. It’s difficult to do. So much has happened in the last few months, and ecoTheater has missed it. People close to me will roll their eyes when they find that as I write this lament I am sitting in a hospital room in Indianapolis waiting for my second and final round of high dose chemotherapy to commence. “Who cares about green theater?” they will ask.

I won’t lie — it isn’t that difficult to realize that I’ve missed out on reporting on the big Broadway initiative, supported as it is by the mayor of New York City, or the up and coming Center for Sustainable Practice in the Arts (CSPA) (founded and driven by Ian Garrett, a regularly mentioned activist on ecoTheater), or the fast approaching Earth Matters on Stage (EMOS) at the University of Oregon, or, or, or…

I mean, it’s easy enough to see that there are bigger things to consider in my life right now. But, what can I say? For once, I hate being just a spectator. It’s like sitting through hours of rehearsal, not saying a word to anyone, and not participating in any way in the production.

For now, I have taken a leave of absence from my job with CTM and have done very little “work” of any kind in the last month or so. The only project I have spent time on is The Cancer Stories Project, hopefully the first stage work for the still-being-founded Wisconsin Story Project (WSP), which I hope to be a new model of theater that will take bits and pieces from many idea-makers, heading towards not just ecologically sound theater production, but also aiming to be a model of theater that solves for pattern (or here).

Who knows? Perhaps one day ecoTheater will simply morph into a blog tracking the progress of WSP, and how we’re doing our best to stay green, while tackling other issues that plague today’s so-called regional theater.

But no matter what I’ll be back here writing soon. So, don’t forget about me…