For the last decades, collaborations between art and ecology have become more popular as an option to try solving environmental issues, as well as a way of social intervention. You can take a look at the work of several environmental artists in this article by G. Roger Denson, cultural critic and essayist, published by the Huffington Post, which discusses political artists of the last decade: 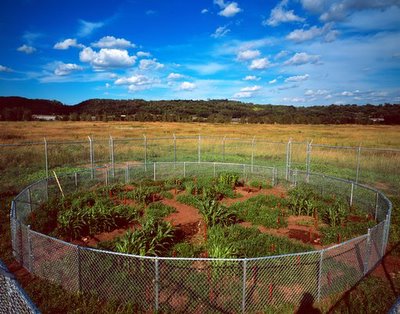 For those of us who have followed the art and ecology movement over the last two decades, Mel Chin is considered an influential pioneer combining art with brownfield remediation. His famous or infamous Revival Field (1989-ongoing) funded with NEA money that was rescinded then later reinstated, demonstrated the natural processes of removing heavy metals from soil using hyper accumulator plants. He did this project in collaboration with an agronomist at a landfill site in Minnesota.

Mel will be in Los Angeles next week to give a talk on his Fundred Dollar Bill Project in New Orleans. If you have never heard him speak, you should go, with the promise that you will be entertained and educated. Being an artist should be so much fun!

What happens when the climate changes around you but you are still in the same location?

The fourth issue of Mammut Magazine will investigate the effects of climate change on the human psyche, focusing on a new definition of sadness called “solastalgia.” Coined by Australian philosopher Glenn Albrecht, it refers to a form of homesickness felt while still at home, particularly as it refers to the perceived change in one’s home environment caused by climate change. A parallel of sorts to nostalgia, solastalgia was created by combining the Latin words solacium, meaning comfort, and algia, meaning pain.

Albrecht created the term in 2003 after interviewing scores of Australians, many of whom noted that they felt a deep sense of loss as the landscape changed around them and familiar plants and animals were gone. “They no longer feel like they know the place they’ve lived for decades,” Albrecht said in a 2007 Wired interview.

Mammut Magazine is looking for essays and artwork that:

>>> deals with, affirms or denies the idea of solastalgia

>>> investigates how we define our sense of belonging through our environment

>>> confronts how we are (or will be) affected individually and collectively by these changes.

We welcome contributions from all fields, while keeping in mind the magazine’s general focus on art and the environment.

The fourth issue of Mammut is being guest edited by Ian Garrett, the executive director of The Center for Sustainable Practice in the Arts. http://www.sustainablepractice.org

Please send a short outline of your project and/or images to mammutmag@gmail.com

I’ve received a few emails alerting me that I had information wrong in my previous post on Chapman Kelley’s piece, Chicago Wildflower Works. 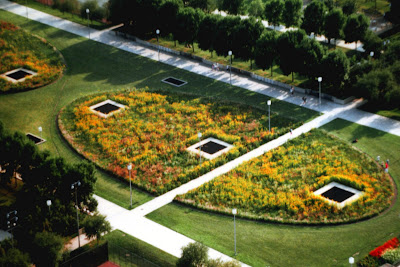 Here’s a shot from 1992, taken well before the park was altered by the city of Chicago. The image was provided by the artist.

And the shot I used in my previous post was taken after the piece was altered in 2004. In addition, here’s a watercolor proposal for the piece done in 1984. And a photo of the park with Frank Gehry’s concert pavilion in the foreground. A curving pedestrian bridge connects that pavilion to the altered garden by Chapman Kelley.

Although I was a bit confused on this originally, seeing all these images has greatly helped me understand Chapman Kelley’s federal appeal that his site-specific installation is original art under the 1990 Visual Artists Rights Act. In September 2008, a Chicago Federal District Court said the park piece did not meet the definition of original art, and this spring, Kelley appealed that decision. More than half of the wildflowers were removed and as you can see in the photos, the ovals were altered to a long rectangle with one oval in the middle.

For really good reaction and analysis of this court case, there have been two excellent posts on the Arts and Ecology Blog here and here. Also, there’s a good post from 2007 on the Aesthetic Grounds blog.

As an artist and gardener, my heart is definitely with Chapman Kelley on this appeal. How terrible to see a garden that you designed and helped maintain for decades get ripped up? The main thing seems to be managing expectations—something the city did horribly by not working with the artist when deciding to alter his work.

Some might say this is simply landscaping but somewhere in there (and I guess this is the point of the court issue) there’s the line between art and landscaping, artist rights and the rights of the city or whichever institution manages site-specific art.

If anything, I’m glad some of the wildflower park is still there and maybe a compromise can be reached to expand or do the best to return the Wildflower Works to it’s original proposed format.