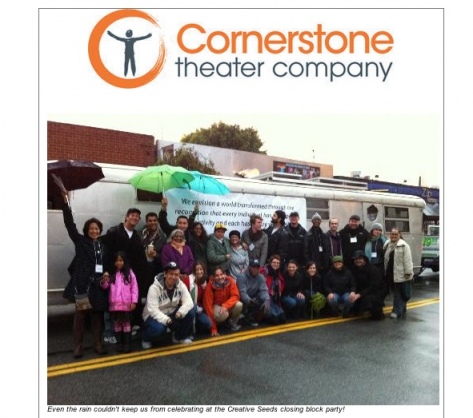 The rain didn’t stop us from having fun on Sunday November 20 when our 1951 Spartan Trailer served as a video booth for people to record their stories about food access and equity at Cornerstone Theatre’s Block Party. The party was the last in a two-week series of events called Creative Seeds – performances, discussions and learning opportunities – that kicked off a major Cornerstone Project, The Hunger Cycle – nine world premiere plays that will be performed over the next five years. In preparation for a show we plan for July, Sam Breen performed Bob Dylan’s poem “Last Thoughts On Woody Guthrie” accompanied by musician Kevin Robinson. Share YOUR stories of hunger and food at www.cornerstonetheater.org.  Cornerstone will post them on their blog and use them to inspire their work on the Hunger Cycle.

The workshop is embedded in the exploratory practices and research of the Social Sculpture Research Unit and informed by its network of active members and associates. In this sense it also provides an introduction to social sculpture and its role in bringing about a viable word.

The program me is led by artist Shelley Sacks, head of the Social Sculpture Research Unit at Oxford Brookes University, and Dr. Hildegard Kurt from and. Institute for Art, Culture and Sustainability in Berlin.

Please enrol as soon as possible. Places are limited.

The Free Store in Nassau Street, Manhattan, created by artists Athena Robles and Anna Stein has been creating a stir. It was inspired by a liberal hippie initiative from 1967, the Diggers Free Store which operated under the slogan “Don’t Waste Give To The Diggers”. This time Robles and Stein have created their own Free Store just a few from Wall Street in New York’s financial district.

The idea is simple. Everything in the store is free. You’re encouraged to donate something too, of course. In return for your purchase you’re issued with a receipt that declares no money has changed hands.

“Alternative and generous systems such as bartering have long been used in times of financial hardship,” say Robles and Stein. “Artists, in particular, are familiar with having to be creative to make ends meet and have functioned on generous systems, especially artist-to-artist. Free Store aims to broaden this circle of trust and exchange by including the general public.”

From an economic perspective, it appears a facile response to crisis.  Are the artists seriously saying that we should abandon materialist ideas of value? As art though, it’s a playful, optimistic gesture, questioning what we place our trust and value in, especially given the context. With all the vacant store-frontage in our High Streets, even with Wellworths, there’s so much potential to play/do something productive in the dead space in middle of our cities.