The thing we shouldn’t be asking artists to do 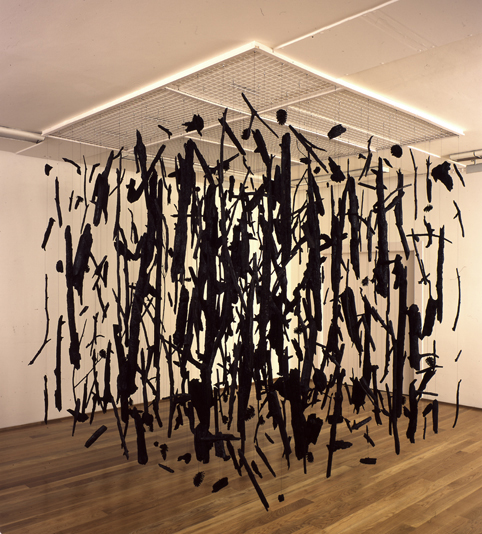 Heart of Darkness by Cornelia Parker, 2004 from Earth: art of a changing world, London 2009

This is Climate Action on Cultural Hertitage week – it’s an initiative championed by Bridget McKenzie as a response to the growing number of individuals and organisations calling for a more clearly defined sense of purpose from the arts and heritage sector.  People like Al Tickell of Julie’s Bicycle ask: “Why do we expect moral leadership to come from corporations and science? Surely the meaningful nature of the arts in society puts it in a position to take a lead on climate action?”

There are two aspects to this. Firstly it’s about how we behave ourselves. Art fairs, say, have become an example of the muscularity of the art industry. As curators/critics Maja and Reuben Fowkes have asked,  is this world of global art jamborees a sustainable one? Gustav Metzger’s Reduce Art Flights was one of the artist’s passionate “appeals”, this time to the art world to reconsider how they had been seduced into transporting themselves and their works around the globe. Furtherfield.org’s We Won’t Fly For Art was equally explicit, asking artists to commit to opting out of the high profile career track that conflates your ability to command air tickets with success.

Industries can change the way they behave. Tickell’s work with the music business has already shown how a cultural industry can transform itself in terms of process.

But there’s also the role of art as a spoke in the wheel of culture. Science itself changes nothing. To become a transitional society requires more than policy. The real change must be cultural. So should climate be the subject matter of art?

Pause for thought: Do we want rock stars enjoining us to change our ways? Please God, no. See? If it doesn’t work for rock music, why should it work for other art forms?

In an article being published next week on the RSA Arts & Ecology website, Madeleine Bunting will be arguing strongly against the urge to push artists into an instrumental role in climate:

“The visual arts offer a myriad of powerful ways to think and feel more deeply about our age and our humanity, but it is almost impossible to trace the causal links of how that may feed through to political engagement or behaviour change,” she cautions.

It is time to accept that artists don’t simply  ”do” climate. Even the most obviously campaigning art is of little value if it is simply reducible to being about climate. They may be inspired to create by the facts of science and economics, as Metzger and Ruth Catlow and Marc Garrett of Furtherfield were in those examples above, but if you asked them to make art about climate they’d almost certainly run a mile.

What was interesting about the RA exhibition Earth: art of a changing world was the way that made that explicit. Artists like Cornelia Parker and Keith Tyson were clear in saying their pieces that they weren’t necessarily conceived with climate in mind at all, (though both are passionate about the subject). The decision to include Parker’s Heart of Darkness as an a piece of work to make us ponder the destruction of our planet was a curatorial one.

There’s a kind of separation between church and state needed here; institutions shouldn’t just be looking to their carbon footprints, they should be looking to see how they can contextualise this cultural shift with what they show their audiences – whatever the artform. It is up to the curators, directors and art directors to take on this role. In this coming era, we urgently need events, exhibitions and festivals that make us feel more deeply about the change taking place around us – and we need them to find new audiences for those explorations too.

But what we shouldn’t be doing is asking artists to make art about climate.

Thinking about the “use” of art at times like these

Some while ago I did an interview with Siân Ede, Director of Arts at the Gulbenkian Foundation. This week I finally got around to transcribing it and posting it up on the main arts and

ecology website. She was particularly smart when it came to addressing the objectives of the RSA Arts & Ecology website here:

People think there must be a use for art in issues around the environment – and we believe there is – but quite often they misconstrue what that use is.

Yes. Artists never use the word “use”. What Kant says about art is it’s purposiveness without a purpose. And it is a response to the world in any number of interesting different ways because all the artists are looking at it slightly differently. So there is a fundamental problem for me, and I think for the RSA too, and for the Arts Council, about asking artists to make things that have a utility, that are issue-based, in the jargon. You’ll get people like Cornelia Parker saying “as an individual I am very moved by the politics and the ethics

of environmental issues, but I can’t do that in my art.” It’s not how it works. Because the arts are much more complex and do not have a particular purpose.

Obviously there will be some artworks that have a particular purpose, and interestingly the attitude to nature that we hold enshrined because of Romanticism, means that we are now aware that nature is no longer the nature that it was. Romanticism came about in response to the industrialisation of the countryside. Now we know nature is no longer the sublime, the transcendent, the beautiful, the God-given. It is tainted. It is sad. It is ending.

You can’t say, “Hail to thee, blithe spirit!” any more like Shelley did, without being aware that the lark is in decline. If you read the Shelley again you read it with this new awareness and you bring this awareness to it.

Is there a problem then with a project like Arts & Ecology – or is there only a problem if you think about it in terms of “use”?

Oh, subtle question. I mean, you could say, arts and sport, or arts and economics, couldn’t you? And arts and anything? In fact my book Art and Science is part of a series of books that are art and anything… Art and Medicine, Art and Sex, and in a way you’re just making an interpretive selection. “Ok, let’s look towards all the art that looks at the environment, and look at environmental issues.” Which is different from being an agenda given to artists. Of course, how can you not make art about the environment? Nobody’s isolated.

So Arts & Ecology, or Art and Science, gives you a pair of critical glasses through which to look?

Yes. Yes it does.