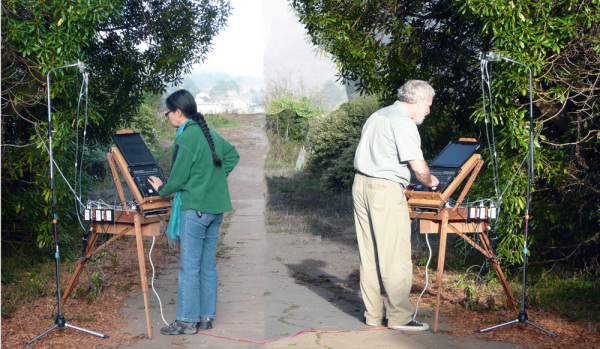 ecoartscotland is pleased to partner with Creative Carbon Scotland and Edinburgh College of Art to present Collins & Goto’s Spirit in the Air at the Edinburgh Art Festival 2013.

Collins & Goto, the eminent US ecological artists now based in Scotland, will present new work, using the Tent Gallery as a base of operations and performance to explore the actual rate and flow of CO2 in the environment in Edinburgh.  This project asks the question If humans produce gas in cities and there are no trees around to breathe it, does anyone care?

Creative Review – What does a ton of CO2 look like? 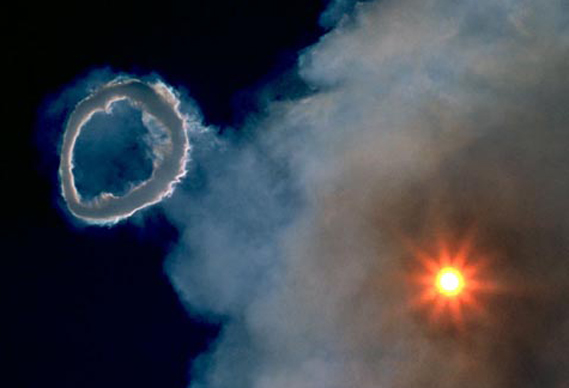 BIG VORTEX is the idea of Berlin-based artists realities:united. Waste gases will leave the chimney of the plant (which will turn waste into energy) as revolving gas clouds in the shape of smoke rings. The rings become visible due to the condensation of water in the flue gases as they slowly rise and cool, before resolving into the air. The rings produced in this way will, the artists estimate, be 30 metres in diameter and three metres thick and “constitute exactly one ton of fossil carbon dioxide, which is added to the atmosphere”. “[In] this way the rather abstract pollution aspect gets somewhat more graspable and understandable, something you can see and relate to,” the artists say.

via Creative Review – What does a ton of CO2 look like?.

We interview Deanne LaRue and Scott Mason today. They are both working on the CO2 Cube by the Tycho Brahe Planetarium in Copenhagen. We’re saving the INterview for later, but here is some footage as it was getting dark about then once the sun is nowhere to be seen.

This Post was originally posted to Mike Lawler’s ecoTheaer blog on May 8, 2007. We are reposting it here to share this ecoTheater classic with new readers while MIke continues to regain his health. You can read his blog about his ongoing battle with cancer, The “C” Word, by clicking here.

Everyday I think about this subject more, and everyday I try to talk to someone who might help me see it a little more clearly. Most recently, I had lunch with Natalie George and Michael Massey, a theater professor at St. Edward’s University in Austin. He is not an expert on this subject by any means, but just having the opportunity to speak with folks and get an idea of what they think is enormously helpful. Nowadays I even dream about green theater–and the question that keeps rolling around in my brain, persistent, nagging, is whether or not it’s even possible. And, if it is, do those in power (the artistic directors, the business managers, the board members) care enough to make it happen? Or, maybe that’s the wrong way of looking at it–the question really is: do they believe the issue is critical enough to influence the decisions they make about their mission, and their funding? I’m not sure. But I have come up with a rough list of the elements that are at the center of the dilemma, the things that must be scrutinized and addressed if any of us are to help curb the world’s destructive path toward catastrophic environmental and human health dead ends.

1) The building —
The buildings that house the performing arts may be the most detrimental to the environment of all. According to the U.S. Green Building Council(USGBC), commercial buildings are responsible for 70% of the electricity load in the United States. Furthermore, the USGBC estimates that “if half of new commercial buildings were built to use 50% less energy, it would save over 6 million metric tons of CO2 annually for the life of the buildings—the equivalent of taking more than 1 million cars off the road every year.” Those numbers are staggering. What’s worse, there is only one performing arts facility in the entire country that has taken the steps necessary to reduce its impact on the environment (see ecoLogue, April 26, 2007). This is not for lack of newly constructed or renovated facilities–consider the Guthrie’s new spaces, for which they spent nearly $200,000 on “utilities” in 2005! If theater facilities did their part in reducing the negative role that buildings play in our lives, we would make enormous strides.

2) Theatrical lighting systems —
Chris Coleman of Portland Center Stage (PCS) told me last month that the necessary lighting equipment for the new Gerding Theater made it difficult to meet the USGBC LEED Platinum rating. Other areas of efficiency were ramped up significantly on the project in order to offset the amount of energy required by the desired system. While theatrical lighting companies, such as Electronic Theatre Controls, Inc. (ETC), have made moves toward efficiency (witness ETC’s ever popular line of Source Four equipment), they have a long, long way to go.

3) Material waste —
This is a subject that has come up time and again in ecoLogue–even in its short life. The fact is, theatrical production revolves around a process of creation and subsequent destruction. So much effort is devoted to imagining, designing, and building theatrical scenery–and yet, very little (or so it would seem) goes into what happens to all of it once the final curtain has fallen on a production. And even those who do consider the demise of scenery, allowing it at times to weigh heavily on their minds (see May 3, “Is Waste Inherent in Theater Production?”), can only do so much. Remember, reuse and recycle come after the all important reduce. This must become the central word in theatrical production. The problem, of course, is our fear of limiting the artistic process. No artistic director in the world wants to tell his or her creative teams to limit themselves in order that they may reduce the waste generated by their productions. But, is there a time that artists must step forward and play a role in change, rather than merely using what they may to comment on it? Reducing the use of non recyclable materials alone would go a long way in reducing a theater’s waste. Conceiving of a way to reuse and store (safely–perhaps off site) scenery would be another.

4) Toxic materials —
Just have a look at the ecoLogue entry from April 27 up there (“Monona Rossol and the toxic, unsafe theater we create”), and you may begin to understand the often toxic stuff that we theater artists work with on a regular basis. Actually, that entry doesn’t really go into detail, but suffice it to consider these fields: scenic carpentry (welding, working with foam of all sorts, adhesives, stains, finishes, et cetera), props (ditto), and costumes (including wigs, makeup, millinery, crafts and dye–all using a myriad of toxic chemicals). Of course, there are laws and regulations in place that dictate the safe use of these materials, as well as their proper disposal, but guess what? According to Monona Rossol of Arts, Crafts & Theater Safety (ACTS), most theaters don’t abide the law. As has been written here before, simply acting in accordance with OSHA and EPA regulations would help reduce harm to both the environment and theater artists themselves.

There are, to be sure, other areas that will affect the environment and human health in theatrical production, but I think the four listed above are the worst offenders.

LEED standards don’t stand in the way of artistic expression

This Post was originally posted to Mike Lawler’s ecoTheaer blog on July 19, 2007. We are reposting it here to share this ecoTheater classic with new readers while MIke continues to regain his health. You can read his blog about his ongoing battle with cancer, The “C” Word, by clicking here.

Today I spoke with Scott Bowne, the production and facilites manager for Theatrical Outfit (TO)–number 5 on mySummer 2007 greenList. They may have been alphabetically #5, but chronologically, they were #1. Remember Tom Key (“We wanted to do the right thing“), TO’s executive artistic director? Key was the first–and thus far, only–leader of a theater going (or gone) green to tell me without hesitation that he was eager to build green.

Since Bowne has only been in his current position with TO for less than a year, he’s still trying to catch up with the idea of managing a green facility. And, unfortunately, the idea hasn’t quite fully infiltrated their way of producing theater.

But, what was most interesting about our conversation was Bowne discovered that the USGBC wasn’t interested in inhibiting theater artists from doing their jobs, and creating the kind of work they should. Bowne encountered this especially when TO was mounting a production of Doris Baizley’s Shiloh Rules and the dilemma of using fog or haze came up. After putting a call into the equally-new-at-this-LEED-stuff staff of Portland Center Stage, Bowne says he was reassured to learn that the folks at the USGBC, while concerned about the air quality issues of theatrical fog or haze,weren’t in the business of telling artists how to create art. Of course, such issues are not new to the theater business either, and Bowne still had to keep in mind the health of the performers and audience. Since TO’s Balzer Theatre has a state of the art ventilation system that monitors CO2 levels while introducing fresh outside air to control air quality, the hazing issue became one that caused little problems. The Balzer’s ventilation dissapated the haze so quickly that it became somewhat of a non issue. “We decided not to combat that,” Bowne said, and so the haze made brief appearances at the top of each act.

The hope is that Bowne will continue to learn and grow into his position (which he has held for less than a year, after a long career with Alliance Theatre). He has the opportunity to make a difference with a company that has already taken huge steps in their commitment to sustainability.