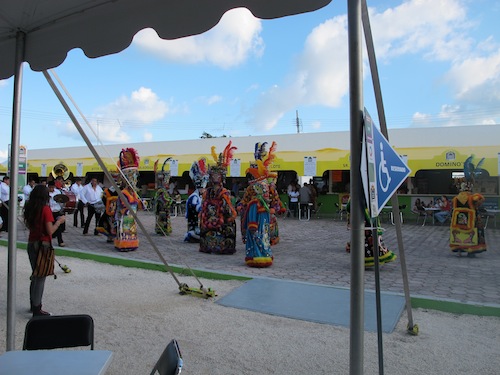 As with the previous COP, the CSPA has been seeking out alternative action around the climate meetings. Moe Beitiks, a CSPA affiliate and writer for Inhabitat.com, is Executive Director Ian Garrett’s traveling companion for the conference and made her way to the Moon Palace today. The CSPA, instead, headed to the Villa Del Cambio Climático or Climate Change Village to see what was happening with the Mexican version of Hopenhagen and meet with the co-director of Artport, Anne-Marie Melster, who is organizing projects here in Cancun.

You may remember Artport from last year’s COP15 and their (Re-) Cycles of Paradise, which has been remounted in Mexico City concurrent to COP16: Through video installations, photography, drawings, sculptures, and interactive interventions, artists such as Kim Abeles (USA), Subhankar Benerjee (Indien/USA), and Charley Case (Belgien) explore links between the destruction of nature and the suffering of women, revealing hidden or unknown aspects of the interrelation of gender and climate change. They will retell the story of a “lost paradise” and the role of women. Gender issues will be scrutinized as part of a process to reverse climate change. “Paradise” is no longer a long-lost ideal world but can be recreated as a contemporary, more sustainable place on earth.

This year, ARTPORT_making waves and partner Cinema Planeta are presenting a rich program of cell phone video contests, art videos, panels with conference participants and artists, and a live art performance with hundreds of children drowning little islands in the midst of a heated climate debate. It is part of the official cultural program of the United Nations Climate Conference in Mexico, COP16, at local cinemas, outdoor screens, public spaces, and conference locations in Cancun, Tulum, and Playa del Carmen.

Moe will have more on that soon, as the information is digested.

The Climate Change Village, like Hopenhagen, was a mixture of public stage, exhibitions on green technologies and cultural showcases. Aboce is a picture of masked dancers in the food stalls. Additionally, there was a temporary structure which held a photo and video installation by photographer Willy Sousa on the the culture of Mexico called Mexico en tus Sentidos which had previously toured to international cities and been a part of the Mexican Pavilion at the recent Shanghai Expo. It was capped with a lovely piece of Mexican Pride/Propoganda focusing on the diverse populations of Mexico interacting with the flag. 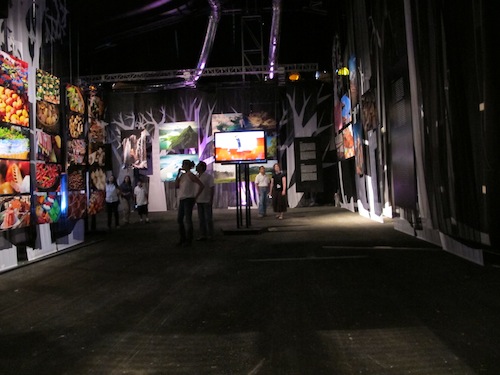 We immeadiately scurried over to the main expo hall to catch a screening of Cool Stories I, Artport’s short form, curator film series. It was unfortunately shown on a lo-res led video panel, but the films are worth check out in all of their glory on the Artport website.

Here is an excerpt from one of the included films, Rob Carter‘s Metropolis:

Later on in the week, the Artport Public performance of La Isla Hundida (The Drowned Island), their collaboration with Spanish artist Javier Velasco, will involve hundreds of school children from Cancun, who will produce an island from a cutout model with a newspaper page during a live performance in a public space in each city. The children will then drown the islands in a large container filled with water. The performances will be videotaped and streamed live.

I may be gone by the time the first one happens, on the 4th, but if you would like to attend, check out their website or our calendar. And, to make your own drowning island, here are a couple informational vidoes:

After the screening, we grabbed some tacos and climbed into a collectivo van to get back into downtown. One thing I will say is that there is plentiful and convenient transportation for getting around Cancun itself. Many buses, shuttles and collectivos, all really low cost. However, getting to the various sites related to the conferences–which are all fairly remote compared to downtown OR the hotel zone– is a real annoying venture. Official shuttles only go to official places like associated hotels, but not things like the bus station or transit hubs. And then you’re let with taxis, which aren’t expensive per se, but aren’t the lowest cost option.

Once we made it back, we took a dip in the pool and called it a night. 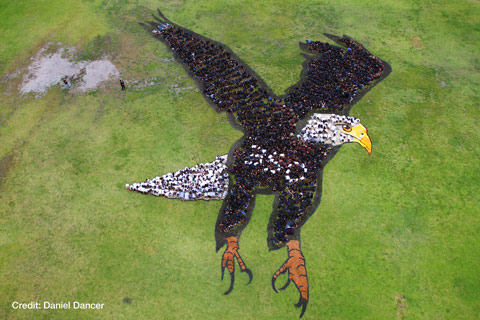 This November 20-28, 350 EARTH will launch the world’s first ever global climate art project. In over a dozen places across the globe, citizens and artists will create massive public art installations to show how climate change is already impacting our world as well as offer visions of how we can solve the crisis. Each art installation will be large enough to be seen from space and documented by satellites generously provided by DigitalGlobe.

350 EARTH will be the first-ever global scale group show on the front line of climate change—our polluted cities, endangered forests, melting glaciers, and sinking coastlines. People around the world are invited to take part by attending signature events, submitting their own art, and spreading the word about the project.

350 EARTH will take place on the eve of the next United Nations climate meetings in Cancun, Mexico where delegates will work to create an international climate treaty. Our politicians have all the facts, figures, and graphs they need to solve the climate crisis. What they lack is the will. 350 EARTH will demonstrate the massive public support for bold climate action and the role that art can play in inspiring humanity to take on our greatest challenge: protecting the planet on which we live.