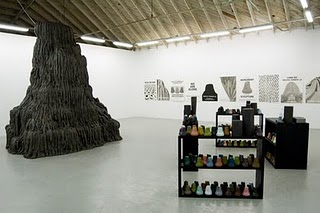 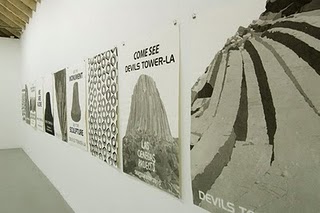 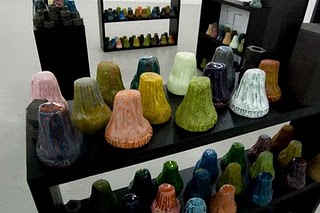 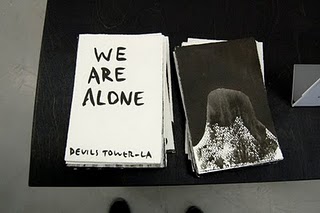 Devil’s Tower has officially become an LA Monument, at least for a little while, until the clay dries in the exhibition of Matthias Merkel Hess‘ new work, which comes down on October 2nd at Las Cienegas Projects. The notion of recreating an iconic natural wonder (the original is located in Wyoming) in an urban setting, even in a gallery, is a novel one. Hess, who is the creator of the EcoArtBlog and editor/publisher of Mammut magazine, which he launched in 2008, is also a recent MFA graduate from UCLA (and undergraduate in Journalism and Environmental Sciences). For his first solo show in a LA gallery, he has chosen to combine his interest in art and ecology with his love of clay, in a brillant “outpost” installation where visitors can purchase handmade postcards, paperweights and miniature color glazed clay replicas of Devil’s Tower, all under $20 each. Wall posters are original works of art and go for a lot more, but still under $1,000. If you cannot afford to go to Wyoming to see the real Devil’s Tower, it is highly suggested you head on over to La Cienega near the 10 Fwy and catch a glimpse of Hess’ handmade wonder ASAP.