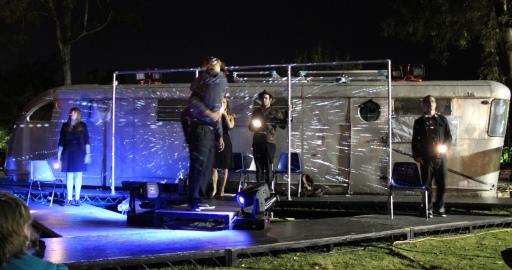 The stars–and the moon- were in alignment last week when Cody Braudt, a BFA-1 student at Cal Art presented his play “Outbound to Wonderland” at Trailer Trash during the New Works Festival 2011.

The play focuses on the relationship between a precocious seven-year old girl and her writer father, a dreamer who fights for his daughter’s right to develop her imaginative powers.  Cody describes Lizzie as “spunky, sarcastic and ironic with a strong sense of fantasy- and sometimes a lack of focus.” 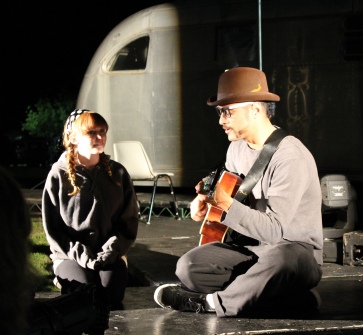 Nora King as Lizzie and Casey Jackson as her father

When a school psychologist prescribes medication to improve Lizzie’s math scores and classroom behavior,  her father recoils, worrying that medication will squelch Lizzie’s creative side.  Together, father and daughter plan an evening together under the stars in Wonderland, their imaginary world that is a tip of the  hat both to Lewis Carroll and to the real-world name of the last stop on Boston’s Blue Line.

Several of the play’s scenes are set underground,  on a subway platform and inside a subway car.  Filmed images from a speeding subway window are imaginatively projected against the Spartan’s aluminum siding, in a superb use of space, sound and light.

The inspiration for the play came more than a year ago when Cody and his dad were visiting schools in Boston. To get Cody a real-world feel of student life in the city, his father insisted that they take public transportation. Descending the subway steps, they saw the sign, “Outbound to Wonderland.”  At that moment something clicked:  they both thought it would make a great title for a play. 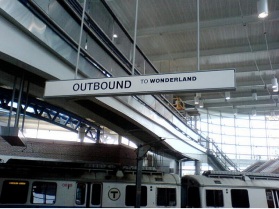 In the end, Cody chose Cal Arts over Boston.  But the idea for the play surfaced again when he first arrived at his new school and saw Sam’s trailer parked in the lower lot.  “I thought it would be a perfect place to stage a play,” said Cody.  Later when Sam gave a talk to one of Cody’s classes, the two agreed Cody’s new work could take place at the trailer.

Two days before the first performance, the crew descended on the trailer at midnight to set up.  Then, during the tech rehearsal it rained, underscoring the challenges of outdoor performances.  The challenges of working with a small venue was another element.

“It’s a creative challenge,” Cory explained. “It’s not easy to work with the constraints on space.   But that’s what makes it stimulating.  It’s difficult to imagine the play being staged anywhere else.” 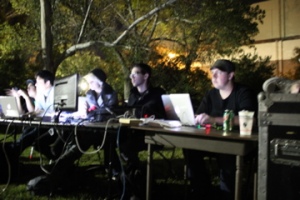 Cody (right) and his fellow technical directors for Outbound to Wonderland.

Cody practically grew up in the theatre world, acting professionally as a child at the Guthrie Theatre and other Minnesota venues. At Cal Arts he wanted to turn his hand to the technical side of productions.  “It’s a whole new world of creativity.  As a director, I want to be able to bring all these aesthetics together, to understand sound and lighting design.”

The move to Cal Arts was difficult at first, having left a tight-knit group of friends behind.  “After high school, some of them stayed in Minnesota; others moved to Chicago.  I was the only one who went all the way out to California.”

As the school year comes to an end Cody has fallen in love with Cal Arts.  “I’ve made new friends and have still been able to keep my old ones – they’ve been very supportive.”

When discussing the importance of home and community to artists – a theme central to the Trailer Trash Project – Cody says, “Home is not about a place, it’s about the people you enjoy being with, people who will support you. People who won’t stifle your imagination.” 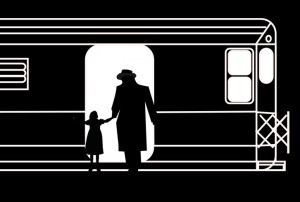 detail from poster designed by Cody Braudt for "Outbound to Wonderland"

As the crew stuck the set late last Thursday night, Cody’s thoughts had already turned to future, considering how to expand and improve on the play, and of new productions he would soon undertake.  But he stopped long enough to discuss ways that Trailer Trash could join him on his journey,  Outbound to Wonderland.