Border Art in the War On Difference 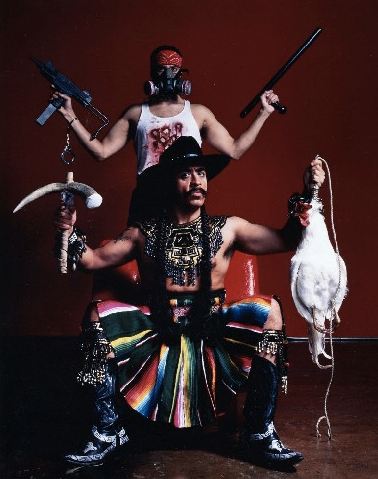 When Sam presented The Trailer Trash Project at the Arts in the One World Conference (Jan. 27-29) he heard  Guillermo Gómez-Peña give the keynote talk.   We thought you might like to read more about this extraordinary performance artist, poet, playwright and teacher.

In the border region between the United States and Mexico who are the insiders and who are the outsiders?    Guillermo Gómez-Peña puts borders – between people of different nationalities, ethnicities, religions and sexual preferences – at the center of his work. This “stubborn Aztec hipster” plays with some of the iconic images that invade our subconscious and feed our fears.  His personas include a Narco-Dandy, El Mexterminator  and San Poncho Aztlaneca, a shaman/saint from an unknown border region.

Earlier pieces explored the loneliness of the immigrant experience in the United States.  While still a student at CalArts he wrapped himself in a batik cloth and lay down on the floor of an elevator.  Another time he dressed as a homeless Mexican and begged for food. (No one stopped.) 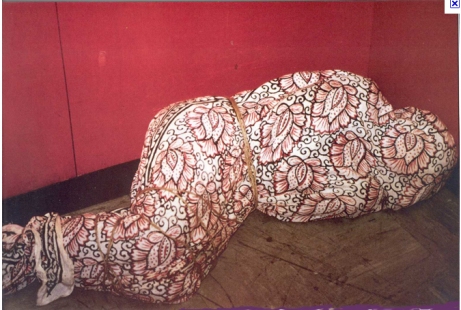 The human body is often used as a metaphor for the body politic.  In the Mapa Corpo Series, performed with Violeta Luna and an acupuncturist, he re-created a ritualistic sacrifice in which members of the audience were invited to help stick needles topped with flags into Luna’s naked body.  The piece is a statement against the War On Terror which Gómez-Peña calls “the War On Difference.”

Using his artistry, wit, intellect and considerable compassion, Gómez-Peña invites us to examine the transgressions of western society and overcome our fear of the other.

In a seven-hour workshop held at the conference,  he gave the participants a suitcase full of simple props, telling them to improvise.  “Think of it as a performance jam,” he said. “Performance artists jam just like musicians.”

Next he invited the group to transform each other into icons representing the sacred and profane.  With an eccentric selection of music playing while the actors got into character,   he likened the exercise to a cabaret where the audience is invited to participate:  “Think of it as an obscure German lounge bar  where the images connect in a common theme.”

At the end of the workshop he encouraged aspiring performance artists to create “a borderless ethos,” experimental laboratories for change where divisions between outsiders and insiders begin to fade away. “The way forward requires hospitality across the divide,” he said.

Participants emerged with huge smiles on their faces. CalArts multimedia artist Mersiha Mesihovic said she felt the workshop changed the way she would approach her work in the future.  Dancer Lindsey Lollie agreed, adding she hopes to attend the International Summer Workshop in Oaxaca, hosted by Gómez-Peña’s troupe, La Pocha Nostra.

( Merisha and Lindsey collaborated on another AOW performance, “On The Subject Of Freedom,” which you can read about by clicking this link.)

Sidebar: “On The Fear Of the Other”

do you hear the police sirens? beautiful, eh?

Ammmeeeeeeerica, what a beautiful scary place to be

but then living in fear is normal for us

we are all scared shitless of the immediate future

by the way, are you scared of me?

of my accent, my strange intelligence,

my obnoxious capability to articulate your fears? 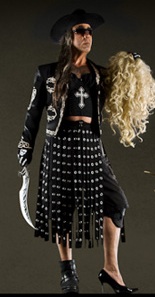 an articulate Mexican can be scarier than a gang member

are you scared of my moustache?

my shamanic ability to exorcise the evil out of white people,

’cause I’m scared of you,

of your silence pinche mustio

your silence makes you really scary

& the distance between you and I makes it even worse.

For more on GGP’s workshops, see this link .  For resrouces, check out La Pocha Nostra’s bookstore. See also this article, “Disclaimer:  Notes on the death on the American artist,” from In These Times (May 19, 2006).