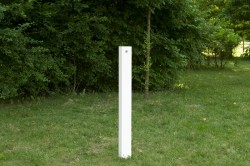 Sunday, June 2 inaugurated Ecoismi, 2013, an international event for contemporary art in the heart of the Natural Park of the Island Borromeo in Cassano d’Adda, Province of Milan.

Ecoismi is a public art project that reflects on the processes and transformations that relate to the territory, the environment and present condition to trigger a reflection on the dynamics of ecological and sustainable.

Through the language of contemporary art, artists, architects and designers were invited to confront the issue of balance between man and nature. During the period of residence – work in progress they have created a multisensory path consisting of twelve site-specific installations realized n the area of the Natural Park.

Each of them has developed the themes of the project according to its own specific declination, in a variety of shades ranging from the question of energy savings that of climate change,from the action of man on the environment to the disappearance of some species.

All artworks are made with natural materials, recycled or recovered. The artists have based their poetry on the reuse of waste materials were reinserted in a cycle that brings them back to life, where nature and art have the opportunity to renew their reciprocal myth.

Radici (Roots) by AtelierFraSe (Francesco Gorni and Serena Montesissa) is an architectural intervention to “experience” the trees as living organisms, through the creation of wood niches in which visitors take their seats. Again in wood is made by The fleet Group (Vasili Macharadze and Bessa Kartlelishvili), the sculptural work Mesh, in which the two authors report an object, the foot into the wild after being initially converted into trigonometric language.

Blackout project by Ada Kobusiewicz introduces us to the theme of ongoing climate change on our planet and invites to reflect on the question of energy savings. Also Arca (Ark) by Chiara Sgaramella is focused on raising public awareness, her work aims to celebrate biodiversity by building an ark.

The intention of Grace Zanotto with Lux Flower, a photo-luminescent flower that opens to the sun, is to create an installation that speaks of art as a possibility for dialogue between the species that live on Earth, to renegotiate the rights of all living beings.

The geometry is deeply connected to both Ramificioconnessioni by Matteo Rota – which reconstructs the vascular branching of the leaves and branches of trees tie in the three spatial dimensions through the figure of the cube – and the project Kreuzungen by Giacomo Zaganelli who wants to pay homage to the relationship between man-nature representing the contemporary environment through a large installation by floral appearance, made with linen thread.

The work Un mondo sommerso (A submerged world) by Diana Franceschin want to flip up and down and the elements earth, air and water, immersing the viewer in a hypothetical dip in the middle of a group of fish. While Skyfield, by Julia Jamrozik, is based on the idea of capturing the ephemeral and changing nature of heaven, and bring it to the ground, providing a new context for its remark.

Päivi Raivio is the author of Unwind, an installation that uses the element of the wind, is composed of aeolian harps, forming a corridor 20 meters long. The project of Selene Volpi concerns sound research of natural elements, Scatole sonore (Boxes Sheet) is an artwork composed by a collection of sculptures that play with the action of the wind.

The project Dada d’Adda di Susanna Battin, is found in many parts of the park and is in direct connection with either observation of the territory of the island and with eleven works realized by other artists.

The objective of Ecoismi is indeed to activate a process of raising awareness of environmental issues by introducing principles of “urban ecology”. It also aims to bring contemporary art to diverse audiences by implementing a model of creative enhancement of externalities of the territory.

The exhibition is open every day until 22 September. Admission is free. 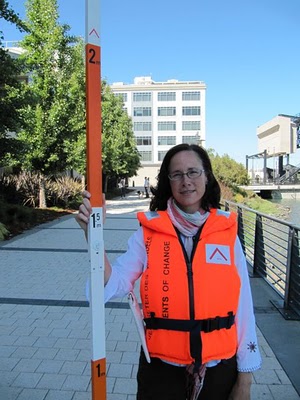 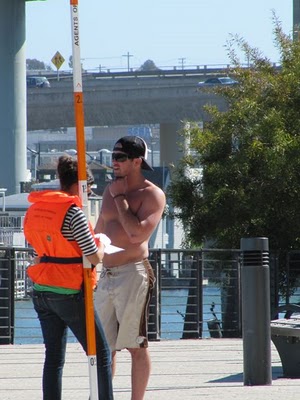 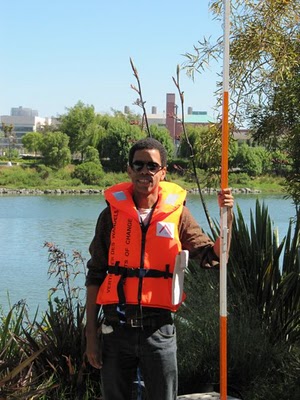 In 2008, ecoartspace co-curated an exhibition for Exit Art in NYC entitled Environmental Performance Actions, which included a video documentation of Agents of Change, a Unit Earth Agenda project developed by Shelley Sacks and James Reed of the Social Sculpture Research Unit, Oxford Brookes University (UK). Although I was familiar with the work, yesterday I had the opportunity to meet Reed in San Francisco and to experience first hand what it might be like to be an “official” agent of change.

A group of five participants met at noon at the new Intersection 5M gallery, located in the San Francisco Chronicle building at Mission Street and 5th, where we spent three hours in an open discussion on what is agency and sharing personal experiences that catalyzed change in our lives. We then heading down to 4th at Mission Bay where we put on customized Agents of Change life preserver vests and held large wooden measuring sticks that illustrated the depth of several meters of potential water encroachment due to climate change. Each participant stood on their own along the waterway and was encourage to reflect on our own sense of agency in this situation, the site, and to record others concerns. Attached to the life preserver was a booklet where we could register and offer a receipt to passersby, confirming their concerns about climate change.

Reed studied under Shelley Sacks, a former student and collaborator of Joseph Beuys at Oxford Brookes from 2005-2007. It was during this time that they developed the Agents of Change climate change kits and began what has become a series of workshops and public interventions initiated at the Social Sculpture Today exhibition in Basel, Switzerland in April 2007. 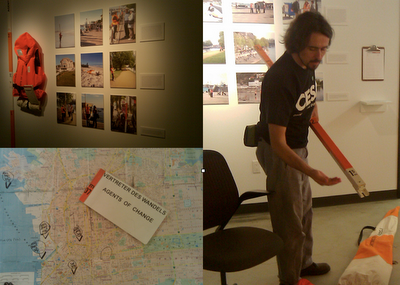 Questions this project asks are:

How do we develop a wider personal and philosophical framework that cultivates a deep sense of personal and shared meanings?

How do we develop a culture of transforming our mode of consciousness?

How can we begin to realize our full potential as human beings and work as transformers of the materialist thought systems that shape our world?

How do we excavate the insights of the heart?