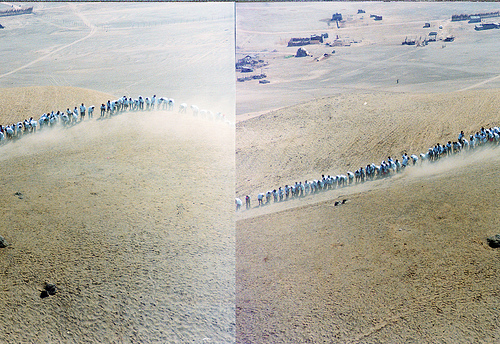 The manifestations of “experimental geography” (a term coined by geographer Trevor Paglen in 2002) run the gamut of contemporary art practice today: sewn cloth cities that spill out of suitcases, bus tours through water treatment centers, performers climbing up the sides of buildings, and sound works capturing the buzz of electric waves on the power grid. In the hands of contemporary artists, the study of humanity’s engagement with the earth’s surface becomes a riddle best solved in experimental fashion. The exhibition presents a panoptic view of this new practice, through a wide range of mediums including sound and video installations, photography, sculpture, and experimental cartography.

The approaches used by the artists featured in Experimental Geography range from the poetic to the empirical. The more pragmatic techniques include those used by the Center for Urban Pedagogy (CUP) in projects made with students and other non-art groups that aim to strengthen peoples’ roles as agents of change in their own environments. See, for example, their map intended to help longshoremen and truckers identify chokepoints in the cargo trade network. In their similarly empirical projects, the Center for Land Use Interpretation (CLUI), a research organization, examines the nature and extent of human interaction with the earth’s surface. CLUI embraces a multidisciplinary approach that forces a reading of the American landscape (such as the disfiguring effects of culling natural resources from the picturesque banks of the Hudson River), thereby refamiliarizing viewers with the overlooked details of their everyday experience.

Experimental Geography is curated by Nato Thompson, curator at Creative Time in New York. It is accompanied by an illustrated catalogue, co-published by ICI and Melville House, that includes essays by Thompson, Jeffrey Kastner, and Trevor Paglen.

The James Gallery, The Graduate Center at CUNY

The Colby College Museum of Art