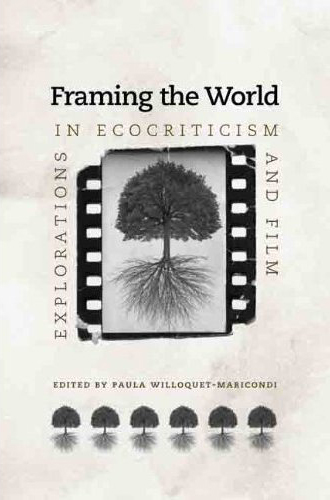 Twelve essays  in four parts, focusing on ecocinema as activist cinema; the representation of environmental justice issues in Hollywood; independent and foreign films, the representation of animals, ecosystems, natural and human-made landscapes and readings of two mainstream eco-auteurs, Kiyoshi Kurosawa and Peter Greenaway, Framing the World; explorations in ecocriticism and film, edited by Paula Willoquet-Maricondi, 2010

At last, a book on ecocriticism for film that is more than a review of films with environmental themes (though there are so very few of the latter as well). Lots of very valuable and timely essays on both mainstream cinema but also identifying key experimental filmmakers who have developed ecocentric approaches to film-making, for eg. in the work of independent Slovenian film/sound artist Andrej Zdravic. Also an excellent chapter on the very real limitations and lack of critical awareness in the director Herzog’s popularly regarded environmental films.

Also of note and just published this year is ‘Chinese Ecocinema in the Age of Environmental Challenge‘. I think its great to have this perspective of film from a region that has endured vast ecological destruction and is producing many poignant environmental films. This book is much more academic but again an excellent resource for those interested in the critical development of ecocinema. It’s also made me eager to search out the films mentioned in the book, like this one centered on  the 3 Gorges dam – ‘Still Life’

via Framing the World -two timely new books on ecocriticism and film — An art & ecology notebook.