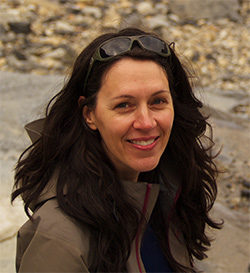 Chantal Bilodeau is a New York playwright and translator originally from Montreal. She serves as the Artistic Director of The Arctic Cycle – an organization created to support the writing, development and production of eight plays that look at the massive social and ecological changes taking place in the eight countries of the Arctic. She is also the founder of the international network Artists And Climate Change and was a co-organizer of the Climate Change Theatre Action (CCTA) which presented over a hundred events worldwide in support of the UN 2015 Paris Climate Conference. Recent awards include the Woodward International Playwriting Prize as well as First Prize in the Earth Matters on Stage Ecodrama Festival and the Uprising National Playwriting Competition. She is the recipient of a Jerome Travel & Study Grant, a National Endowment for the Arts Fellowship, two Compton grants and a US Department of State Federal Assistance Award.