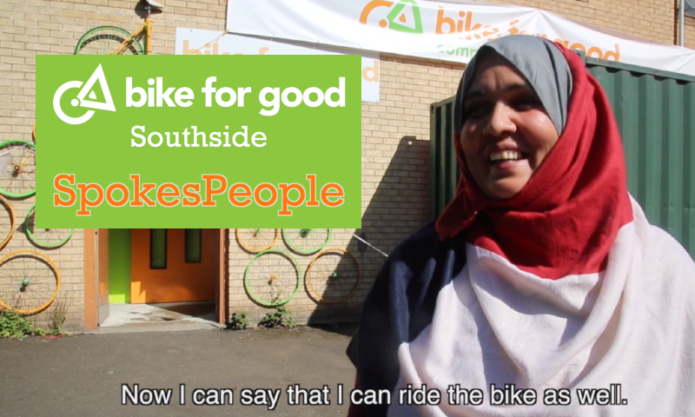 Last year we supported theatre-maker Lewis Hetherington and filmmaker Geraldine Heaney to work with Glasgow cycling charity Bike for Good and produce a film about VeloCommunities. VeloCommunities was the 1000th project to receive funding support from the Scottish Government’s Climate Challenge Fund.

During Climate Week 2019, we launched ‘Let’s Go! A film about cycling and climate change’, sharing the stories of the amazing staff, volunteers and participants (as well as the artists themselves), involved in breaking down barriers to cycling in Glasgow’s Southside and inspiring community-led action on climate change.

The artists have now produced a series of short films, telling the stories of five individuals’ cycling journeys, from what inspired them to get started to the different benefits they derive from choosing to go by bike.

Domestic transport makes up nearly 30% of Scotland’s total carbon emissions, with road transport accounting for 73% of total transport emissions.* Therefore, it is vital that our cities and rural environments support more sustainable options such as walking and cycling as well as public transport.

These films show that climate action is not only good for the planet, it brings multiple positive benefits to society, including tackling social inequalities, improving physical and mental health, and building more sustainable communities. We hope you enjoy them!

The full length version of ‘Let’s Go!’ can be enjoyed on the Keep Scotland Beautiful YouTube channel.

Find out more about the VeloCommunities embedded artists project.

This embedded artist project is part of Bike for Good’s VeloCommunities Project, which is funded by the Scottish Government’s Climate Challenge Fund.

Please get in touch with Creative Carbon Scotland’s culture/SHIFT Producer Gemma.lawrence@creativecarbonscotland.com if you wish to find out more about this project or more about other projects that support collaborations between artists and environmental initiatives.