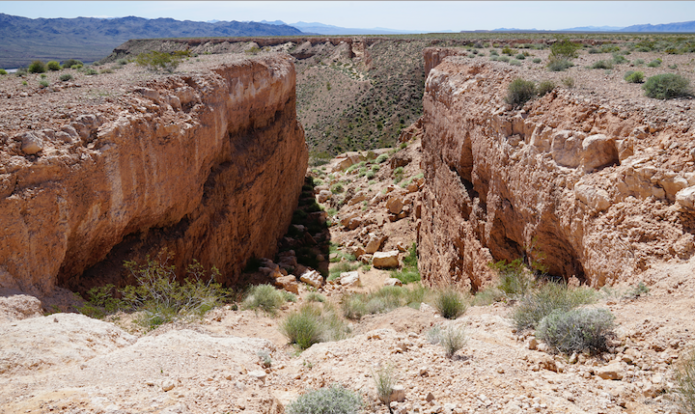 In the last couple of weeks, our world has turned on a dime. In what seemed like an instant, we were pulled from our day-to-day active lives into isolation. Our city has shut down, as has much of the country. All non-essential businesses have closed, and groups of people are restricted.

In a quest to see something more than the inside of my house, I took a drive to see Michael Heizer’s iconic land art piece – Double Negative. Located about two hours from my home in Las Vegas, Nevada – I drove north to Overton, Nevada. From there, once I hit the dirt road, I was essentially alone with just an occasional vehicle visible in the distance.

Parking on the rim of Mormon Mesa, I was struck by the vastness of the view shed. There were a full 100 square miles in view, from snow-capped mountains in the distance, the flat desert plain of the mesa and the meandering Virgin River in the valley below. Double Negative blends into the view as if it had always been there and can be easily missed if you don’t know what you are looking for.

Heizer’s Double Negative is considered a “negative” sculpture. In 1969, using heavy equipment with the help of some dynamite, he removed almost a quarter of a million tons of rock on the Mesa edge. In his sculpture, he created two cuts, both 50 feet deep and 30 feet wide and several hundred feet long. Over the years, it has weathered and eroded, but the basic shape is still clearly visible and will be for years to come. Initially, Heizer did not want the piece restored in any way, instead, wanting the desert to reclaim the land over time. More recently, potential restoration is being discussed with support from the artist.

In the late 1960s, art dealer Virginia Dwan provided funding for the project and donated the land and the piece to the Los Angeles Museum of Contemporary Art. The site is open for viewing 365 days of the year, and directions are accessible from Google Maps and a variety of online sources.

Michael Heizer felt that the most accurate view of Double Negative was in person, being physically present at the site. As I look over the edge of Double Negative, I am struck by how relatively unchanged this sculpture is after a half-century. In this uncertain time where our lives have changed significantly, what lesson does this land art piece share about the mysteries of time and our role in it?

Paula Jacoby-Garrett is a freelance writer in Las Vegas, Nevada.