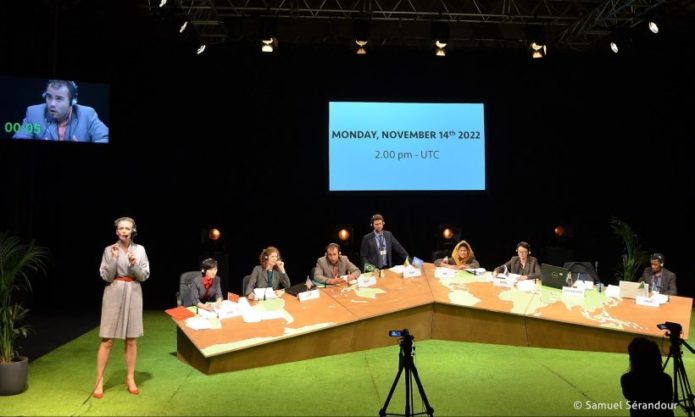 Perhaps the most consequential theatrical forums of the moment are the UN climate conferences, or COP meetings, which occur every year in a different city and at which the governments of the world negotiate coordinated attempts to reduce greenhouse gas emissions. Or at least they perform diplomatic negotiation and perform commitments to reduce emissions. Global emissions continue to rise as climate impacts worsen, heightening the fictive, performative impression given by these conferences. At times they appear to be nothing but deceitful political theatre.

On the other hand, these meetings have also created platforms for truthful and effective political theatre, such as Greta Thunberg’s speech at COP 24 in Katowice in 2018, or Papua New Guinea delegate Kevin Conrad’s criticism of American obstructionism at COP 13 in Bali in 2007. The conferences have also inspired creative theatrical work, particularly in conjunction with COP 21 in Paris in 2015, which was accompanied by ArtCOP21, a “global festival of cultural activity on climate change.”

In May of that year, 200 students from around the world met at the Théâtre Nanterre-Amandiers outside Paris to simulate an idealized, biospherically-minded version of the COP to come. The project was at once a Model UN conference and a devised participatory theatre piece. It was guided by Laurence Tubiana, who led the French delegation at COP 21 and was a key architect of the Paris agreement, the philosopher Bruno Latour, and the scholar and theatre director Frédérique Aït-Touati, alongside Théâtre Nanterre-Amandiers artistic director Philippe Quesne.

The student participants performed not only the roles of government negotiators, but also those of diplomats acting on behalf of cities, oceans, soils, and other species. They were given three days and one night to reach an agreement, a fascinating experiment documented in the film CLIMAT: le théâtre des négociations (known in English as CLIMATE: Make it Work!), directed by David Bornstein. A fractious process, the conference was nevertheless a thrilling test-run for the progress that might be made that November when world leaders convened in Paris.

Though the progress made in Paris later that year inspired hope, little has changed since then. COP 25 in Madrid was a striking failure, even by the abysmal standards of international climate conferences. While we must do our utmost to inspire action at the all-important COP 26 this fall in Glasgow, the gap between deteriorating climatic conditions and intergovernmental inaction seems ever more absurd.

The French writer-director-performer Frédéric Ferrer has explored this absurdity through a pair of plays, entitled Kyoto Forever and (with a wink) Kyoto Forever 2, which he created with his company, Vertical Détour, in 2008 and 2015. The plays are a theatrical hybrid existing somewhere between political documentary theatre and the more farcical edge of the Theatre of the Absurd. Kyoto Forever fictionalizes a past UN meeting, COP 13 in Bali, while Kyoto Forever 2 imagines a 2022 preparatory meeting for a future COP, numbered 28, taking place on the Indian Ocean island of Mauritius.

The term “Kyoto Forever” entered the lexicon in 2005, when three European policy researchers published an article in which they suggested that international climate agreements might simply cease to make progress, freezing at the wildly insufficient and yet nevertheless largely unmet commitment levels agreed to under the Kyoto Protocol in 1997. It is a terrifying theory, but one that seems depressingly astute, given the general failure to comply with or build on the moderately improved (though non-binding) commitments made at COP 21.

I saw Kyoto Forever 2 in Paris roughly a year ago, going on four years after its creation for ArtCOP21, and its representation of the intractability of international climate politics has stayed with me. Actors from France, Sweden, China, Iran, Congo, Russia, and Brazil argued for two hours in ten different languages. They were playing representatives from (mostly) their countries of origin, attending an entirely fictional but nevertheless all-too-real preparatory meeting.

Reflecting on the performance a year on, what alarms me the most is that 2022 is a mere two years away. The picture offered by Kyoto Forever 2 of the state of these near-future UN climate negotiations was bleak: increasingly desperate and increasingly paralyzed. The production was advertised with an ironic tagline: “two hours to save the world.” The delegates were talking about 6 degrees Celsius of warming, an unquestionably catastrophic threshold, but a scenario well within the realm of possibility in the “business as usual” scenario envisioned by this play.

The delegates deliver the arguments that play out every year at these meetings, but the climate devastation occurring in the background has worsened. Developing countries rightly argue that they should not be subject to the same emissions reduction requirements as the wealthy countries responsible for the crisis. OPEC member states unsurprisingly advocate for carbon capture, refusing to accept the liquidation of their sources of wealth. Russia and China are unwilling to accept restrictions on development. The US refuses to take a leadership role or to cede any ground that might endanger its status as hegemon. The EU scolds but cannot broker compromise. The delegates spend the entire week, played out over two hours on stage, haggling over commas in the introduction to the text of the accord. Meaningless metaphors float around. Absurd debates over a parenthesis here or a digit there strike a tragicomic tone.

We eventually learn that this preparatory conference had been scheduled to occur on another island nation: Vanuatu. This plan is scuttled when horrible storms and flooding strike the island in the weeks leading up to the meeting. Vanuatu is drowning in the Pacific. Midway through the play, the delegate from Vanuatu calls in, water sloshing in the background. People are drowning. The world isn’t getting saved in two hours; it might already be lost.

Despite the dire circumstances, the play inspired more laughter than I am accustomed to hearing when watching artistic work that engages with the climate crisis. It felt like seeing a play by Ionesco or Beckett, like Waiting for Godot in a conference center: language seemed incapable of describing or resolving this hyperobject of a problem. Kyoto Forever 2 explores this failure of language, of communication, of conventional modes of international politics. At a certain point, it is tempting to throw up one’s hands and begin to laugh. That temptation must be resisted. We have two years to ensure that Ferrer’s projection of COP 28 hews closer to absurdist farce than to tragic documentary.

In the meantime, staging interrogations of these potentially world-altering yet terminally disappointing conferences might help us achieve better outcomes. In staging COP meetings, we can expose the flaws in the process, dramatize the stakes, give voice to the unrepresented, and imagine the possibilities for the world these conferences could create. Staging the COP meetings can create models for success for a process that has heretofore failed. Perhaps we need more theatrical rehearsals, like Kyoto Forever, Kyoto Forever 2, or the student conference at the Théâtre Nanterre-Amandiers, in order to ensure a successful performance in Glasgow this fall.

Thomas Peterson is a theatre director and researcher whose work focuses on the climate crisis. He is an Artistic Associate with The Arctic Cycle, co-organizing Climate Change Theatre Action. He recently returned from a Harvard Williams-Lodge Scholarship in Paris, where he wrote a thesis on the aesthetic of the sublime in the theatrical representation of the Anthropocene. He created Roy Loves America, a multi-form performance piece about Roy Cohn, and is developing an original adaptation of Ibsen’s The Wild Duck. His engagement in climate activism stretches back to high school, when he led a successful fossil fuel divestment campaign.