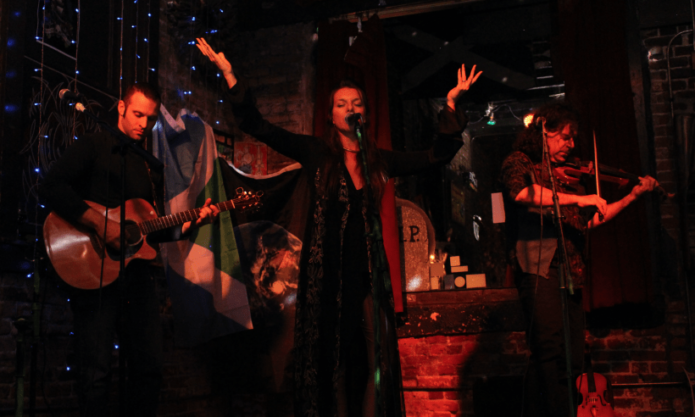 Many worlds come together in the Los Angeles-based singer Inanna’s brand new eco-music project, leading up to her album Acrotopia. Middle Eastern darbuka rhythms meet modern electronic soundscapes, dark visions and warnings alternate with dreams of green utopias. With a background in the alternative electronic rock scene of Europe, a career in belly-dancing, and experience working on a collaborative music project about extinct species, Inanna has crafted a fresh new style and mythical stage persona.

According to Inanna, environmental music is still being invented, just as we’re reinventing culture in order to care for Nature and limit our climate impact. Musically, as well as in her activism, she enters the darkness in order to find a way to the light. A sense of mystery and drama pervades her work and, rather than looking back, her music focuses on a greener future, and a sense of beauty and gratitude.

For Inanna, there is no difference between climate concerns, and environmental and animalist topics. Our bond with Nature is what needs to be mended as we move from seeing Nature and animals as our possessions to honoring them as fellow Earthlings.

Her latest song, On Fire – one of the singles of her upcoming album – is about rainforest destruction, seen from the point-of-view of animals. This powerful anthem-song was inspired by a viral video of an orangutan charging at a bulldozer tearing down its forest, its home. At the same time, the song is about global warming, referring to climate activist Greta Thunberg’s repeated phrase, “Our home is on fire.” The visual elements of the music video allow Inanna to further merge the different strands of her project, and deepen the message: Drone footage of factory farms and animal agriculture in the Amazon bring her belief in veganism together with the climate cause in a way that she perceives as increasingly urgent.

Collaborating with environmentalist groups and activist media is as important a part of her project as building her presence. For her videos, she has received documentary material through her cooperation with environmental organizations like Greenpeace. She has taken part in street demonstrations with Extinction Rebellion and in the climate marches of Greta Thunberg’s Fridays for Future. On stage she is tapping into the more mysterious sides of Nature and womanhood. In her stage performance of Heal, dancers swing their long hair to the rhythms of the zaar dance, a legacy of Ancient Egypt, where healing is made into a collective ritual. Dancing and singing for the Earth, with the Earth and on it, invites a deeper connection with the place where we belong.

The idea behind this environmental music project, as indicated on Inanna’s website, is to give a voice to Mother Nature. Inanna presents a new kind of feminine figure for the pop scene, playing with female archetypes such as the Goddess, the Prophetess and the Queen. Mythology exists to be extended and re-invented: her first music video, Nefertiti XXI, imagines the Egyptian ruler Nefertiti being resurrected as a female green leader for the 21st century. Is there a link between Nefertiti and Inanna, the Sumerian goddess? Certainly since she was a goddess of love and Nature, as well as war. The fight for the environment is truly a war, one in which the defenders are often ignored, even if the Earth they defend belongs to everyone. The love for Nature and our ancient bond with the Earth need to be rediscovered.

We are entering dark times – the Anthropocene – which are reflected in Inanna’s epic song Where We Belong but in her upcoming album Acrotopia, there are also bright and hopeful tracks, such as Twilight of the Dawn inspired by a famous lecture given by H.G. Wells in 1902, where he said: “It is possible to believe that all that the human mind has ever accomplished is but the dream before the awakening […]that all the past is but the beginning of a beginning, and that all that is and has been is but the twilight of the dawn.”

Her album Acrotopia is fittingly scheduled to be released for the 50th anniversary of Earth Day on April 22, 2020. Among the new songs, she has already premiered Invisible City, a ballad about green cities and a new Arcadia where Beauty rules the day, in concerts. The album title Acrotopia includes the component acro- from acrobatics, meaning “higher” or “above” The acro-topian topos, or “place,” is neither an unattainable utopia, nor is it its negative counterpart, the dystopia we all dread. Acrotopia is a higher place, the sum of all attainable improvements, all that we can do better.

Can music make a difference? I believe so. It can bring catharsis, help us work through emotions, and give us a sense of togetherness, not least with Nature – something we need more than ever. To deal with climate change, we need to change our cultural climate too, and Inanna is part of that change. Her ultimate vision is for environmental and animalist topics to be at the very center of culture – where they belong.

Anders Dunker is a Norwegian environmentalist, journalist, painter, and philosophical writer who has covered future-related issues for a number of publications in his home country. He reviews documentary films and non-fiction books for Modern Times Review, and recently edited The Rediscovery of the Earth – 10 Conversations About the Future of Nature, published in Norwegian, forthcoming in English. As a landscape painter, he has painted in natural sanctuaries such as the Annapurna range in the Nepalese Himalayas and the Dolomites in Italy.