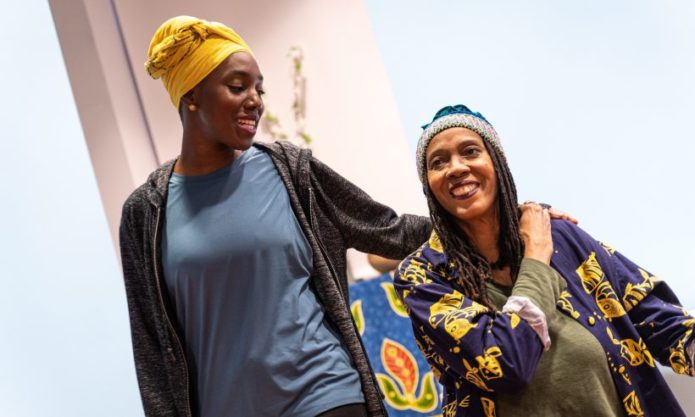 Since mid-September I’ve been greeted daily by emails, zooming in from all over the world, describing performances of short plays about the climate crisis. Somewhere between one and 700 people attended each of these performances, which occurred not just at theaters but also at universities, in elementary schools, parks, community centers, churches, and public squares, and even on kayaks. The plays were performed in cities, from Manila to Nairobi to New York; in towns like Lamoni, Iowa, and Duino, Italy; and outdoors in places like Lair o’ the Bear Park in Colorado and on Biscayne Bay in Florida.

The emails sometimes tell of disappointments – a smaller audience than expected, a last-minute venue change, park rangers interrupting at inopportune moments – but they also celebrate successes – a sold-out run, demand for a reprise in the spring, requests from local government to bring the plays to schools throughout the city, an invitation to perform at the European Parliament. I’ve learned that audiences often laughed together, shared fears and anxieties about the climate emergency at hand, and then left the performance feeling hopeful, joyful, even motivated. That’s no small feat. It is difficult – difficult, but vitally important – to spend sustained time thinking about global heating without despairing. I’ve been trying to hold on to that hope and that motivation.

As 2019 began, I was less than a year out of college, studying theatre on a post-graduate fellowship at the Sorbonne Nouvelle in Paris. Everything was burning. Massive wildfires incinerated vast swaths of land on nearly every continent as 2018 flickered out. Flares and tear gas erupted in the streets of Paris every Saturday as the gilets jaunes protested the Macron government’s economically regressive attempts to limit carbon emissions with a fuel tax. In a matter of months I would join Parisians in the streets on Fridays, alongside tens of thousands of other students inspired by Swedish teen activist Greta Thunberg’s “Fridays for Future” movement. The necessity of rapid, just, equitable climate action had never been more clear to me.

I started thinking about staging the climate crisis because of a play I had seen at the Théâtre Nanterre-Amandiers near Paris in December 2018. A mostly wordless piece exploring the aftermath of a plane crash near a desert island, Philippe Quesne’s Crash park: la vie d’une île inspired me to read French philosopher Bruno Latour’s latest essay, cited by one of the characters in the play. In the essay, titled Où atterir? (literally “where to land?,” though it has been translated into English as Down to Earth: Politics in the New Climatic Regime), Latour argues that, to be effective, any political response to the linked crises of climate and economic inequality requires reinvesting in local environmental stewardship and addressing local grievances, all while retaining open and globally-minded ways of thinking and being.

Latour calls for a re-description of the specific landscapes in which we live in the manner of the cahiers de doléances, the lists of grievances contributed by every community in France in 1789, which constituted a full accounting of the political and environmental conditions of the country. The cahiers offered communities an opportunity for critical evaluation of conditions of life under the government of Louis XVI, and this opportunity for widespread, relatively democratic reflection catalyzed the revolution, which eventually brought many of the reforms called for in the cahiers.

When people were given the opportunity to consider the particular political and environmental grievances of the places they called home, they realized that changes could be made that would dramatically improve their lives. Latour argues that a similar, contemporary political accounting by communities around the world would create the kind of local investment and stewardship that would render climate change a “backyard” issue for everyone, not just the frontline communities that are already fighting extraction operations, rising seas, deforestation, and other threats to their survival.

As a theatre-maker and director, I wondered if the ephemerality and live-ness of theatre might serve as useful tools to stimulate climate action and environmental stewardship at the community level. What other form could exert a localizing influence in our increasingly globalized art and media landscape? After all, theatre is a medium that must necessarily be local, in some sense of the word, but which persistently examines global perspectives. Theatre could even be defined as “the local reinterpretation of globally accessible texts.” I wondered how to make theatre out of Latour’s ideas about climate and politics. Latour seems to be wondering the same thing.

I set about googling “theatre” and “climate change” and very quickly came upon Climate Change Theatre Action. I learned that this work was already occurring on a global scale: every two years, a New York-based organization called The Arctic Cycle, founded by playwright Chantal Bilodeau, commissions fifty playwrights from around the world to write short plays about the climate crisis. These plays are made freely available so that communities around the world can create place-specific events. Global texts, community-based local events.

The fifty short works are written in a range of forms and on a range of issues: global and local, massive and minute, practical and existential. They include folktales retold for an age of mass extinction, absurd farces on climate denialism and political ineptitude, tragicomedies navigating anxieties about individual and societal environmental impacts. Reading and analyzing the plays was an education in the diversity of aesthetic and representational approaches to the climate crisis.

I joined the Climate Change Theatre Action team after moving to New York this past summer, stage-managing our launch event in the city before leaping into the herculean organizational task of recording and cataloguing the performances around the world that would follow in the coming months. This is when I started to get the emails, the ones telling of laugher and hope and joy in spite of the challenges at hand.

It has been thrilling to see the impact of this Dropbox folder of fifty short plays as feedback has rolled into my inbox. At latest count, between September 15 and December 21, 2019, community-oriented theatre actions took place in 225 locations around the world (a 60% increase from the 2015 edition of the initiative), including all fifty US states and every inhabited continent. These performances engaged 2,892 artists, organizers, and activists, reaching 11,988 live audience members and another 10,415 and counting via radio, podcast, and livestream. The initiative engaged more than 25,000 people, more than double the number impacted by Climate Change Theatre Action 2017.

But the numbers don’t tell the story of the performance in Lebanon postponed due to ongoing protests against political corruption and economic inequality, nevertheless rescheduled for a few weeks later; or about finding solace in the plays during a horrific wildfire season in Australia; or about a performance in a town in West Virginia with high rates of climate denial receiving coverage from a local TV station (yes, the headline does say that the event aimed to “encourage climate change” – we’ll chalk it up to an editing error!). They don’t tell you about “engrossed” audiences at an event in Mumbai produced by the National Center for the Performing Arts, or about a “galvanizing evening for Calgarian citizens used to being shamed for expressing concern or taking action on climate change,” curated by Ashley Bodiguel and Vicki Stroich in Calgary, Alberta. Nor do the statistics tell you about Professor Alyssa Schmidt’s students at the Boston Conservatory, who “proved to themselves that theatre can be a change agent in sustainable practice and living, as well as a home for those extreme feelings such as deep grief or abiding joy.”

These emails may not answer Latour’s call for contemporary cahiers de doléances, but they do offer evidence of communal perseverance and hope, incontrovertible proof that small groups of people around the world are meeting and listening and planning for a future together on this rapidly changing planet. This is how we respond to the burning world. We unite, gathering for a few hours in our beloved localities to share joy and inspire action. With each Climate Change Theatre Action feedback email, this message becomes a little clearer.

Thomas Peterson is a theatre director and researcher whose work focuses on the climate crisis. He is an Artistic Associate with The Arctic Cycle, co-organizing Climate Change Theatre Action. He recently returned from a Harvard Williams-Lodge Scholarship in Paris, where he wrote a thesis on the aesthetic of the sublime in the theatrical representation of the Anthropocene. He created Roy Loves America, a multi-form performance piece about Roy Cohn, and is developing an original adaptation of Ibsen’s The Wild Duck. This spring he will direct Kat Zhou’s adaptation of Boris Vian’s The Empire Builders at the Booth Theatre at Boston University. His engagement in climate activism stretches back to high school, when he led a successful fossil fuel divestment campaign.