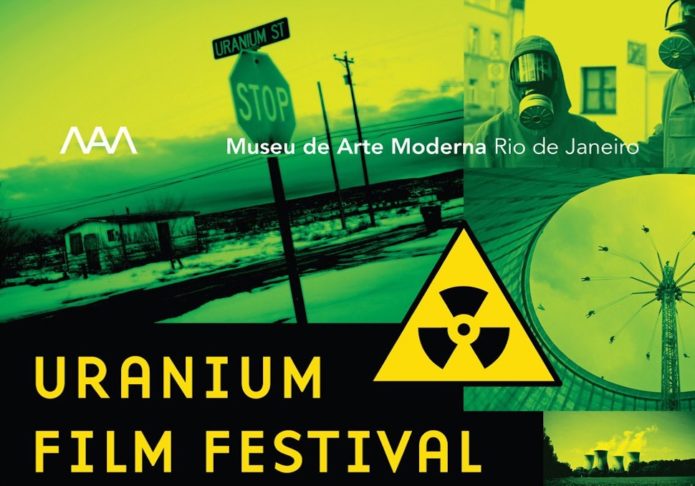 January 27, 2020news
[This] year, May 21st to 31st 2020 we’re celebrating the 10th birthday of the International Uranium Film Festival (link is external) and we want to bring the best nuclear films and its filmmakers from the last ten years together with new productions to Rio de Janeiro. The venue will be like in the years before the Cinematheque of Rio de Janeiro’s prestigious Modern Art Museum (MAM Rio) (link is external). Already more than 25 awarded filmmakers and producers from 12 countries agreed to come to Rio in 2020.

In addition to the screenings of dozens of nuclear films this in the world unique film festival about the atomic age is planning a powerful panel on one of the most important questions of our time: Climate Change and Nuclear Power. Are nuclear power plants a solution to global warming?

Join us and help the Uranium Film Festival to celebrate its tenth anniversary. Whether you are for or against the use of nuclear power or uranium: Everyone should be aware of the radioactive risks.  Make a mark and contribute to the festival.

The Uranium Film Festival’s call for entries for 2020 is sill open. Filmmakers and producers can send their documentaries, animations, non-fiction or experimental movies until 1 January 2020. In addition the festival invites the media and social or environmentally conscious companies as festival sponsors and partners.

AN UNLIKELY IDEA BECOMES A BIG SUCCESS (LINK IS EXTERNAL)

„We founded the International Uranium Film Festival in 2010 just a few months before Fukushima especially to ensure that atomic disasters such as Chernobyl or the horror of nuclear bomb  attacks and nuclear bomb tests are not forgotten nor repeated,” recalls festival director Norbert G. Suchanek. „When we published our first call for entry, very surprisingly one of the first productions we received and awarded was the extraordinary short film Atomic Bombs On The Planet Earth(link is external) by Peter Greenaway. Since that we have shown more than 200 nuclear films from around the globe until today.”

Every penny collected during this campaign will be used to organize the film festival and to bring as many filmmakers as possible to Rio. The more support we get the more filmmakers we can invite and the better and the more impact will have the festival to achieve one of our major goals: nuclear awareness. Any additional funds beyond that goal will help us to organize the festival in other locations too. Like in the years before, further Uranium Film Festivals are also planned in other countries like USA, Germany (Berlin), Portugal, Spain and Greenland. Environmental conscious people and nuclear activists around the world are eager to have the Uranium Film Festival in their country to support their nuclear campaigns against (for example) planned uranium mines like in Spain and Greenland or for the clean-up of abandoned uranium mines in the USA or Portugal.

What others are saying

Photo: Festival volunteers and the founders of the Uranium Film Festival in the centre.

THANK YOU SO MUCH FOR YOUR DONATION AND SUPPORTING THE FESTIVAL.

DONATION VIA BANK TRANSFER TO