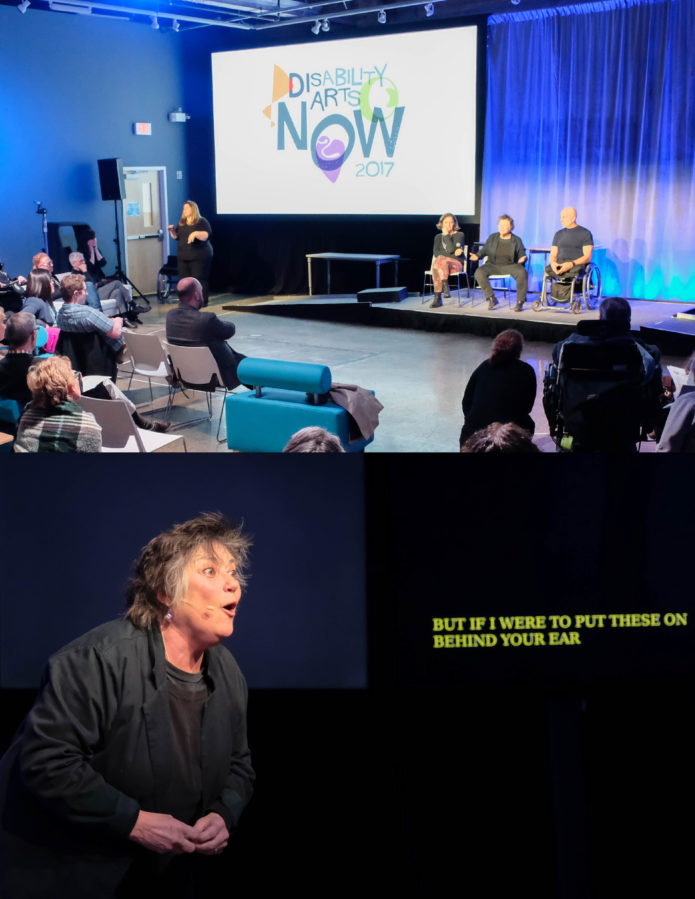 Lead Editor’s note: We will be publishing excerpts from Q18: dis/sustain/ability, guest edited by Bronwyn Preece, in order to make the content accessible to blind readers with audio screen readers. We’ll also be including audio descriptions of the Quarterly’s original layout designed by Stephanie Plenner, described by Katie Murphy. Please stay tuned for future posts and share widely.

In this our third chapter, the CSPA reports on the DISART SYMPOSIUM, a gathering of thinkers and makers discussion access and the arts In Grand Rapids, Michigan in 2017.

The Dis Arts Festival & Symposium was held April 6-8, 2017, in Grand Rapids, Michigan. The event combined performances and an exhibition with a 3-day symposium, gathering a broad spectrum of artists who create from a disabled perspective, or who engage with concepts of disability.

Keynote speakers included Riva Lehrer, an artist, writer and curator– known for her complex portraits, which were featured in an accompanying exhibition—and Sara Hendren, an artist, design researcher, and professor based in Cambridge, Massachusetts. Each day of the event was framed with a theme: Identity, Design and Community. The Quarterly was able to attend April 7th, “Design,” and witness other talks via the event’s live stream.

Sara Hendren spoke about her individual design work, as well as her work with the adaptation + ability group at Olin College. That groups’ work begins with an assertion, “We presume competence. This exhortation is a central one in disability rights circles, and we proceed with it in mind as we work with our design partners. We don’t claim our end-users are ‘suffering from’ their conditions—unless they tell us they are. We speak directly to users themselves, not to caregivers or companions—unless we’re directed to do so. We speak the way we’d speak to anyone, even if our partners don’t use verbal language in return—until they request we do otherwise.” The resulting works included engineering for eating utensils, ramps with kinetic lights, and an acoustic mobility device. Hendren’s individual work involves explorations of ramps and their cultural presence, among many other things.

Beth Bienvenue, the director of the Office of Accessibility at the National Endowment for the Arts, discussed that organizations’ recent efforts to support disabled artists and projects pushing ideas of accessibility. Artist Benedict Phillips discussed growing up dyslexic and the tremendous impact it had on his worldview, leading him to create hilarious works like “The Div,” (“It is berleevd that some were between 90% and 95% of the populasion of the UK are Lecksick. These people fined it hard to spell in interesting ways and are genraly exskloodid from dislecksick culcher.”)

The space of the DisArts symposium was carefully considered according to a variety of needs. In the main hall, sign language interpreters translated all the speakers, who were also broadcast via a closed-captioned live feed. Visitors could watch the live feed from a lobby with couches and fidget spinners—for families and other folks who have a hard time being quiet or sitting still—or from a deliberately quiet corner that looked onto the stage from a window. Snacks and hot drinks were available throughout the day. The result was a cozy, welcoming, multifaceted space, less intimidating—but no less rigorous—than the average conference setting.

DisArt began as a collaboration with Kendall College of Art and Design of Ferris State University (KCAD) and Urban Institute for Contemporary Arts (UICA) in the spring of 2014, and is now a 501(c)(3) organization. In presenting its symposium and festival, and offering consulting on disability access, the organization promotes a social model of disability, which “looks at cultural environments (physical and social) as the main sources of disabling practices. . . people are disabled by the cultural stereotypes and misconceptions heaved on to them by nondisabled standards of health and wellness; they are disabled by attitudinal and architectural barriers.”