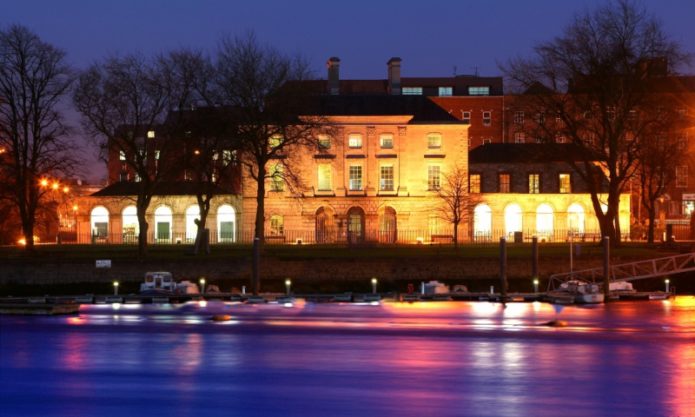 Opportunity: Call for applications for artists residency on Urban Rejuvenation

The European Investment Bank Institute is looking for ONE visual artist (born after 1 January 1984) from an EU Member State to work on the theme of “Urban rejuvenation: Limerick as a source of inspiration”. The beneficiaries will be offered a 6 week-long residency in Luxembourg, enabling them to develop their practice and create a new (body of) work(s), boosted by the mentorship of a high-profile established artist. In 2019, the recipients will each be mentored by acclaimed Finnish artist Jorma Puranen.

The EIB Institute will cover the artists travel costs to and from Luxembourg (for the residency), and to and from Jorma Puranen’s studio (before the start of the residency). The artists will receive a EUR 100 flat-rate daily allowance intended to cover their subsistence costs during the period of residency and all or part of their production costs, and will be provided with a living/working space.

Upon completion of the residency, the EIB might consider acquiring an artwork produced on-site from the artist. In the event that the EIB agrees to acquire an artwork, it will feature in the exhibition Belonging – works from the collection of the European Investment Bank, to take place in Limerick, Ireland, in 2020.

A jury – consisting of Jorma Puranen (the mentor), external art advisers and members of the EIB Arts Committee – will select the candidates based on the artistic quality of their work, their motivation and their potential to make the most of the opportunity offered by the residency, and the relevance of their practice to the cultural context of the EIB Institute.

The selected candidates will be informed of the jury’s decision by email in March 2019.

Applications packages should be sent by e-mail to Ms Delphine Munro and not exceed 12 MB. 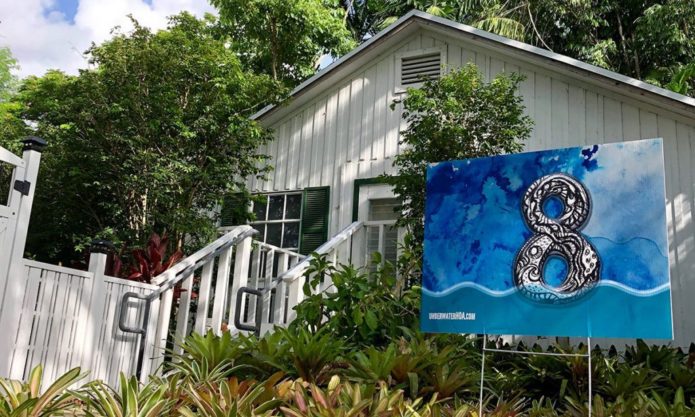 Environmental artist Xavier Cortada is highly passionate about the reality of rising seas, the loss of biodiversity and how the inevitable floods to come will literally “drown” his hometown of Miami, Florida. In response to this urgent existential threat, Cortada has focused much of his recent work on climate change within his own community, including: (1) Underwater HOA, an inventive participatory project using 6000+ lawn signs happening this month in Pinecrest, Florida; (2) Global Coastlines, an exhibition of his Antarctic ice paintings currently taking place at Pinecrest Gardens, a 20-acre park in Pinecrest, and; (3) his ongoing mangrove Reclamation Project now in its twelfth year. Cortada’s commitment to creating art on climate change in general, and rising seas in particular, was influenced by a number of pivotal experiences in his life. In a recent phone conversation, Cortada and I discussed the circuitous path that led him to this moment as well as the conceptual framework behind his work.

To begin with, Cortada did not always make art. With graduate degrees in business and law, he entered the professional world in 1991 working with juvenile delinquents and gang members as what he called “a community-based problem solver.” In subsequent years, as he conducted similar projects in numerous developing countries, he started using art as a problem-solving vehicle that provided participants with a non-threatening way to express themselves and develop connections with one another. At the same time, he was honing his community building skills.

Cortada became a full-time professional artist in 1996, but it wasn’t until 2006 that he developed his first large-scale environmental art project. As he explained to me, it was the destruction of his “beloved mangroves” for the purpose of widening the road along an 18-mile stretch connecting the continental US to the Florida Keys that moved him to create the participatory eco-art project entitled Reclamation Project. Serving as breeding grounds for fish and protection against erosion during storms, mangroves are vital for coastal ecosystems in tropical and sub-tropical climates. Today, 50% of the world’s mangrove forests have been destroyed. Cortada’s goal was to invite individuals in the Miami-Dade County to learn about and then participate in addressing the disappearance of this important native vegetation.

For the initial project, community volunteers gathered mangrove propagules (seedlings) and planted them in plastic cups that were installed in a grid format in shop and restaurant windows along Lincoln Road in Miami Beach during the international art fair Art Basel 2006. Three weeks later, when the propagules matured, they planted them at designated areas on the coastline, “reclaiming the place for nature.” This process continued from 2006-2012 until the Miami Science Museum agreed to host the project as its on-going citizen volunteer coastal restoration project, which continues today and follows the original model developed by Cortada. Reclamation Project has also been installed in numerous other sites across Florida and outside the state. Cortada calls the project “art in the service of science” and is so significant that a curriculum on the mangroves has been developed by the Science Museum and taught in every public school in the county.

Just as the destruction of a stretch of mangroves in his own neighborhood became a pivotal event in the development of Cortada’s art, so too was his experience as a National Science Foundation Antarctic Artists and Writers program fellow in 2006-2007. As he described it,

Sitting in the McMurdo lab, I saw the spectacular mountains and valleys. Scientists brought back sediment samples and natural elements… it was an extraordinary experience to see the micro elements that created the continent.

Cortada began to improvise with the materials at hand and for the first time, created abstract, conceptual pieces, which reflected the melting ice that scientists said would be coming to coastlines all over the world. In all, Cortada made 100 of these images using sea ice, sediment and mixed media. Thirty-eight paintings have been shown in previous exhibitions – the remaining sixty-two have never been seen and are currently on view at Pinecrest Garden, Florida, where Cortada now serves as an artist-in-residence.

In partnership with the Village of Pinecrest, Florida, the University of Miami’s Abess Center for Ecosystem Science and Policy, Florida International University Sea Level Solutions Center as well as Eyes on the Rise, and using the community building skills he has honed over the years, Cortada developed Underwater HOA (Home Owner Association), his latest large-scale, participatory art project. Beginning on December 2, 2018, and coinciding with Art Basel (December 6-9), Cortada encouraged 6000 households in Pinecrest, “to place lawn signs on their properties that designate how many feet of glacier ice must melt before the individual properties are fully under water.” The numbers on the signs range from 0-17. By mapping the town in this way and putting images from his ice paintings on the signs themselves, Cortada is involving an entire community in asking the question, “What are we going to do about this problem?” As he explained to me, he is “making the invisible visible.” He is bringing the reality of melting ice and rising tides to participants’ homes and doorsteps, the personal places that are supposed to feel safe. Cortada’s choice to use what he calls “strange, conspicuous lawn signs,” which call to mind political election paraphernalia, is a nod to the political factors that are holding back solutions to this inevitable danger.

An HOA or home owner association is usually associated with the group of individuals/families who, together, determine the rules and fees that will govern condos or other forms of common property. HOA is part of the project’s title because, beyond the lawn sign installation, Cortada has developed a homeowner association for the families that participated in “Underwater HOA.” It is Cortada’s hope that by creating a vehicle for them to come together to talk with one another about sea level rise, he is creating a “cadre of informed and sophisticated residents” who will work together and with relevant entities to “start problem solving for the future.” Although Cortada admits that he is often depressed, angry and frustrated by the lack of progress towards a solution to climate change issues, he considers himself an optimist and “still believes in the ability of mankind to get this right” before Antarctica comes to town.

(Top image: Xavier Cortada, Underwater HOA sign marking how many feet the sea must rise in order to flood this property, 2018. Courtesy of the artist.)

This article is part of Imagining Water, a series on artists of all genres who are making the topic of water a focus of their work and on the growing number of exhibitions, performances, projects and publications that are popping up in museums, galleries and public spaces around the world with water as a theme.

Susan Hoffman Fishman is a painter, public artist, writer, and educator whose work has been exhibited in numerous museums and galleries throughout the U.S. Her latest bodies of work focus on the threat of rising tides caused by climate change, the trillions of pieces of plastic in our oceans and the wars that are predicted to occur in the future over access to clean water. She is also the co-creator of two interactive public art projects: The Wave, which addresses our mutual need for and interdependence on water and Home, which calls attention to homelessness and the lack of affordable housing in our cities and towns. 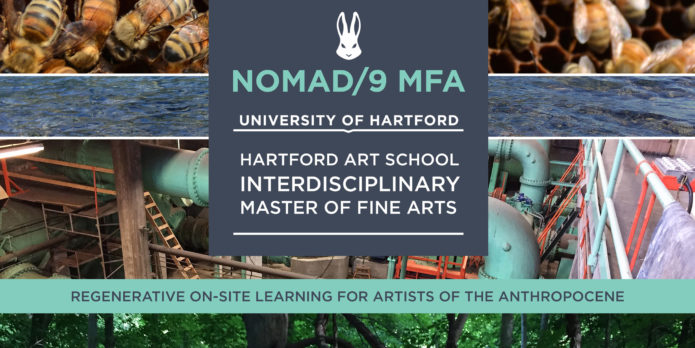 Applications Open: Regenerative Travel MFA for Artists of the Anthropocene

The Nomad/9 MFA offers artists a relevant, field-based approach to graduate studies. Created in 2015, Nomad/9 is a rigorous, low-residency program with a high-impact curriculum that includes ecology, history, culture, and craft. The curriculum provides a thoughtfully curated set of residencies which augment each student’s in-depth thesis advising with artists Christy Gast and Mary Mattingly. During residencies, visiting faculty teach courses in that utilize each site as a learning lab, such as:

This unusual curriculum is the result of founder and director Carol Padberg’s application of ecological design principals to graduate pedagogy, with a focus on ethical culture. The resulting graduate program is built for a diverse student body of artists from a variety of disciplines and divergent points of view. Socially engaged artists, artist educators, interdisciplinary practitioners, eco artists, craftspeople, and artists with an interest in new forms and collaborations are encouraged to apply. Applications for the incoming Cohort 4 are now available online at nomad9mfa.org, with a deadline for Scholarship Consideration of February 1, 2019.