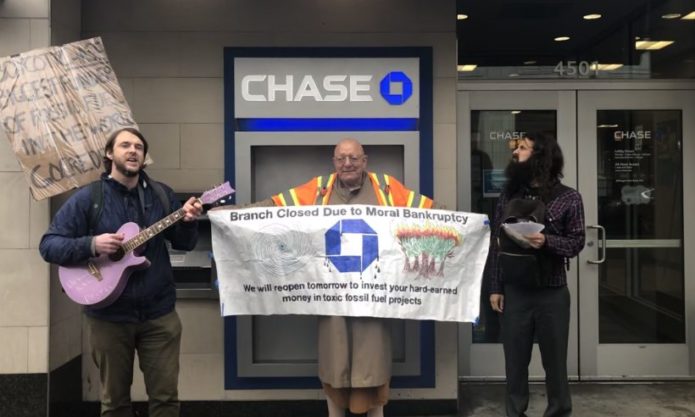 Last summer, when Seattle’s skies were smoke-filled from the wildfires in British Columbia, I started creating the music to my song Drain You Dry. I recall going nearby to Alki Beach and seeing first-responders assist an elderly gentleman who was having trouble breathing. It was also during this time that an orca mother known as Tahlequah pushed her dead calf (the first born to the pod in the prior three years) around the waters of Puget Sound for seventeen days, traveling over 1,000 miles. I remember feeling that this was a communication – a cry for help, a warning, and an act of protest from our intelligent and potentially wiser counterparts of the sea.

Over the course of the last three years, I have been participating in climate justice activism via a local chapter of 350.org called 350-Seattle. We accomplished much in the area of climate change; for example, we recently led the Seattle City Council to unanimously pass a resolution around the Seattle Green New Deal. We also have a multi-year campaign involving a coalition of organizations calling for big banks, particularly JP Morgan Chase, to stop enabling fossil fuel companies.

In the summer, while I was making the music video for Drain You Dry , 350-Seattle deployed a series of “Tarpees” (Teepee-inspired structures walled with tarps instead of traditional materials), which shut down the major thoroughfare of Second Avenue directly in front of the JP Morgan Seattle Headquarters and resulted in the arrest of fourteen activists. I mention my involvement in 350-Seattle, because I feel it has provided me with vigor and hope, both of which inspire and motivate me to make music. Through 350-Seattle’s close alliance with local indigenous groups, I have heard Native speakers express their perspectives around nature in ways that has resonated in my soul. When I am symbolizing purity of nature in the video and music, it is a reflection of these experiences.

At the root of both the song and the video are my own contradictory feelings of love for nature (I am also a molecular biologist), and anxiety from feeling trapped in a system of oppression in which climate change, while eminently pressing, is but one of many threats. These feelings are expressed in my music; the song starts as more of an exotic-feeling folk song and later morphs into a full-blown, technology-infused, post-apocalyptic world, where the organic elements are largely consumed. Also informing the chorus and video imagery is the emotional weight of constantly considering and engaging in ideas around climate change. The song isn’t just about climate change; it’s about the devastating impacts of climate change resulting from systems of oppression as a metaphor for both internal strife and societal decay.

When representing nature in this song, I wanted to use acoustic guitar, world music percussion, and piano, which, for me, evoke a natural spirit. The vocals are more of a hybrid element in which the voice is human and angry, and at the same time, occasionally (literally) being warped by technology and to some degree fused with it (e.g., as accomplished by layering unaltered vocals with vocals altered to sound robotic). In the video, the images of Earth from space are meant to juxtapose life and technology. When it comes to the lyrics, the opening theme reflects a world in decline, which hasn’t yet sunk into total madness. The line “your apathy is killing me” is directed largely at big oil, big banks, and the politicians they control, but also slightly at a portion of the general public not yet motivated around climate change. Among the visual elements, I wanted to include images of climate activists as a motivator to viewers, a call out to groups such at 350-Seattle, and also a symbol of hope.

For the chorus portion of the video, I took a pretty straightforward approach to the catastrophic context – using images of fossil fuel extraction and climate change-related disasters. In particular, fire felt relevant not only for hinting at the concept of a burning Earth and at the smoke that was filling the Seattle skies, but also as a symbol of the intense emotions of those on the frontlines who are facing the immediate impacts of climate change, of the activists battling for change, and the money-addicted players driving the problems. The pacing of the disaster imagery is intended to reflect the chaos gripping our minds as different thoughts race in and out of our consciousness. The general absence of people, or their presentation as isolated and in a state of peril, is meant to further reflect both a concerning apathy towards climate change and a potential for apocalyptic outcomes.

Musically, greed-driven technology was expressed through the step-wise introduction of synthesized elements made to feel volatile by use of distortion, and powerful by addition of synthesized sub-bass. This is in full effect when the chorus hits around one minute into the song. The repetition of the lyrics is borrowed from short chants often heard at demonstrations to create a sense of desperation and panic around a voice experiencing climate change and crying out for help. The lyrics about being “left for dead,” followed by the repetition of the phrase “in the desert of someone else’s making” during the chorus could be spoken by a being now facing catastrophic climate change. The final repetition of “(they are going to) drain you dry” is a warning and plea from an already condemned voice.

Finally, the title was partially inspired by the famed Seattle band Nirvana, who has a song called Drain You. I was once obsessed with Kurt Cobain, who succumbed to addiction. To me, it is fitting as a title since it might be argued that addiction, in this case to money and power, is ultimately what may end our species.

Eric Herbig is a former molecular biologist turned activist, who uses the music he makes as Broken Ocean to express his perspective on a myriad of topics such as love, exploitation, oppression, and climate change. Broken Ocean is an indie-electro-experimental project that Herbig came to as a songwriter and producer after acknowledging the societal inequities present in his community. At odds with his position in creating costly medical interventions, while other folks lacked access to basic care, he left medical research to pursue social justice causes, with a focus on how climate change not only impacts the planet, but specifically people of color and the poor. Broken Ocean’s newest release We Are Antennae is available now.