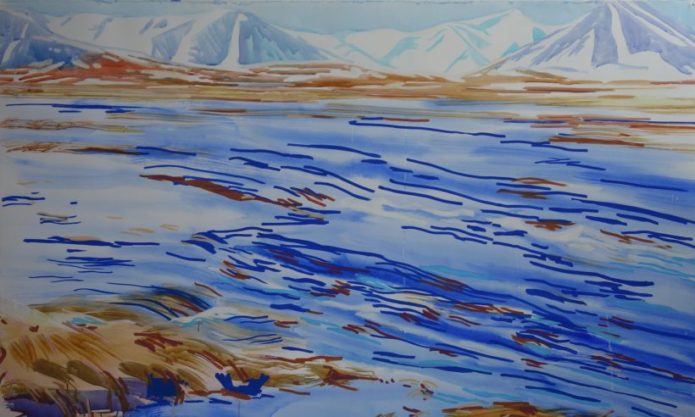 I arrived early that cold spring morning to the only car rental in Fairbanks willing to allow their cars to be driven up Alaska’s James W. Dalton Highway. I examined the car with Mandy, an employee, who helped put me at ease as she described some of her adventures on that road. As an artist coming from New York City, I was more than a little out of my element. I was relieved to see a CB radio, as there would be no phone reception, but the two spare tires in the trunk worried me.

The Dalton highway is a 414 mile stretch of dirt, gravel and potholes that runs along the oil pipeline from the town of Livengood all the way north to the Arctic Sea. The road is one of the most remote and dangerous in the country with only three very small towns along the way. My partner Mark and I would be sharing the desolate road with occasional truckers.

I buckled down for the long drive, my worries dissolving as soon as we started our beautiful ride out of Fairbanks through the rolling hills. Several hours later, we crossed the Arctic Circle where alpine meadows surrounded us. This was followed by miles and miles of scrawny black spruce forests that seemed to come straight out of a Dr. Seuss book. Eventually, we drove through the snow covered Atigun Pass of the Brooks Mountain Range, which released us on the other end into endless tundra. I had assumed that this grand landscape was the true unspoiled beauty of the last frontier but I was learning otherwise.

This was a year ago. I had been working with a scientist from the University of Alaska, Fairbanks Permafrost Lab just days prior. He taught me how to identify various permafrost features just by looking at the landscape and also helped me understand the underground pressures and temperatures which affect the way permafrost behaves. Accelerated permafrost thaw due to warming temperatures expresses itself in many ways and can create a very extreme, unstable and surreal landscape. I saw forests, called drunken forests, growing at all imaginable angles, even horizontally. I also saw the sinkholes of the north, called thermokarst failures. I documented one larger than a football field with adult fir trees dangling off the edge like toys.

In the nine months that followed, I created a series of paintings called Tumbling Forests of the North. I decided to make the works on large scale paper, eight by five foot, in watercolor with acrylic pen. The images are expansive, airy, and bright in color. This stands in stark contrast to the surreal and at times ominous aspect of the changing landscapes. As I observed this destruction in the vast Alaskan landscape, what stood out to me was the duality of terror and inspiration I felt at once. Though collapsing, the places I saw were growing lushly in their new form. This duality reflected the complicated relationship and struggle between the immense destructive power of climate change and the insistent nature of growth. For me, the strong vibrant color also spoke to the strength and positive collective voice that are needed to best move forward to protect our ecosystems.

This summer I found myself back on the Dalton Highway with a new destination: a remote science research station. As I pulled out of the expansive tundra, with light still illuminating the nighttime sky, I focused my attention onto a cluster of structures at the end of a small road. They could have been mistaken for a tiny village, but all the buildings were either made of  shipping containers or tents. I wasn’t sure what to make of this odd place.

I soon understood that this was a very special community of scientists and thinkers who come together yearly for their arctic field work. Dinner conversations were very lively. Everyone seemed dedicated and hard-working, and this collaborative environment was very conductive to new ideas. I spent my days hiking and scanning the tundra for thermokarst failures. I sketched, recorded, and documented them as future source material for my work. In the evenings, I shared what I had seen and, in turn, heard what others had been up to. Someone had measured plant growth in a nutrient treated plot. Others had taken infrared photos from a drone imaging carbon emissions, or done work in the field. I left the field station with new friends, collaborators, many ideas, and a lot of documentation.

As I was leaving, I wondered why I found it so hard to go. Outside in the transcendent landscape, I was reminded how enriching working as a team had been. As I traveled home, I started to think back to various times I had collaborated over the years. I realized how these collaborations came to define pivotal points in my personal growth in relation to my understanding of the broad implications of climate change.

I thought back to my first collaborative work on climate change in 2000, in Amsterdam, where I initiated and then worked with a team of creatives to actualize a climate multimedia opera, The Noahs. And then to meeting Glenn Albrecht, an Australian philosopher, who coigned the term “solastalgia,” the feeling that people experience when they lose their natural environment due to climate change and development. The Solastalgia series then led to contributing to The Eco-topian Lexicon, edited by Matthew Schneider-Mayerson and Brent Ryan Bellamy. The book explores 30 new words introduced to the western psyche to help reshape our perception of community and relationship to our rapidly changing world. Without this type of collaboration with experts in other fields I would not have the same depth of understanding of the challenges climate change presents us.

This tiny remote place in northern Alaska, perched at the edge of the earth, reminded me of one of our greatest gifts: our capacity for collaboration, an essential tool for moving forward together in this age of uncertainty.

Nikki Lindt is a Brooklyn artist currently working on a series of paintings on the thawing permafrost in the Fairbanks area and North Slope Borough of Alaska. She has worked on more than a decade of projects dealing with the impact of climate change. She has given many talks about her work and exhibits nationally and internationally. She is represented by Robischon Gallery in Denver and Heskin Contemporary in New York City. She has received the Pollack-Krasner Grant, the Dutch Artists Grant (Fonds BKVB) among others and has been awarded the Environmental Cultural Award, Milieudienst (Environmental Protection Agency) Amsterdam, Netherlands. Nikki received her BFA from the Gerrit Rietveld Academie and her MFA from Yale University.