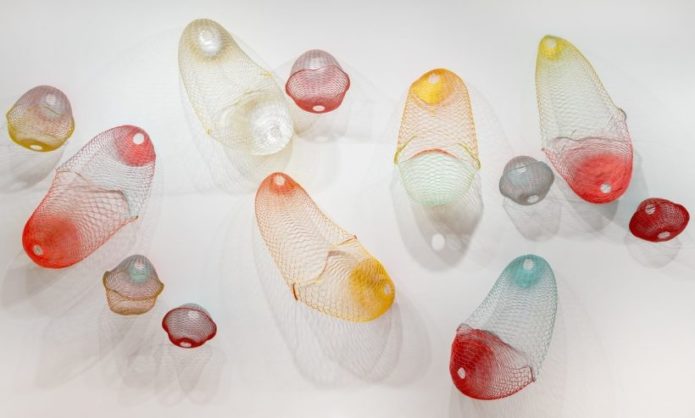 Susan Knight is a painter and installation artist based in Omaha, Nebraska, who has focused since 2002 on the aesthetic and scientific qualities of water. What sets her apart from other visual artists with the same interests, though, is the presentation of her subject matter. Using an X-Acto blade as her implement of choice, Knight hand-cuts her interpretations of water out of Tyvek, paper, plastic and Mylar, concentrating on the negative spaces that the cutting process creates.

The resulting pieces contain intricate patterns, many of which reflect water’s archetypical movements, such as the “vortex action” and the “fat triangle and egg shape,” that take place under the surface of all rivers and in ocean currents. Knight admitted to me in our recent conversation that she will never understand the molecular science behind these movements but that they do guide the shapes she makes.

Knight did not always use the X-Acto blade to hand-cut works of art, nor did she always consider water to be her chosen subject matter. In fact, prior to 2002, she was a realistic figurative painter who had been dependent on photographic references to guide her work. That year, however, she was
determined to participate in an exhibition on rivers that had been organized to honor a friend who had recently died.

Initially unsure how to proceed, Knight was eventually inspired by a show at the Museum of Arts and Design in New York City, which had been comprised entirely of hand-cut paper imagery. She decided to hand-cut a representation of the Grand River in Grand Rapids, Michigan as her contribution to the river exhibition. She had grown up alongside the Grand River and knew its contours. Although Knight had originally thought of this project as a one-time effort, she soon realized that the process of hand-cutting and the subject of water were artistically liberating to her and offered endless imaginative possibilities.

Wanting to learn more about the science of water and what was beneath the surface, Knight began studying the bodies of water near where she has lived. She gathered information on the breakdown of the ecosystem in the Great Lakes as well as the quality of groundwater in Nebraska and then
translated the research data into visual patterns that reflected these environmental conditions, most of which had been impacted by climate change. Her earliest work focused on the visual patterns found in Zebra mussels and Spiny Tail Water Fleas, two species that have invaded the Great Lakes through the ballast water that was illegally discharged from ocean-going vessels traveling through the St. Lawrence River. As the water of the Great Lakes has warmed, the Zebra mussel (and other alien species) has found a habitat suited to breeding. The proliferation of the species has contributed to the decimation of the local fishing industry, and the spread of its shell fragments has transformed the sand on local beaches.

Since 2002, Knight has also examined the riparian habitats (the wetlands adjacent to rivers and streams) of the Yampa River in Colorado, mixed-use issues in the Hudson River in New York and preservation efforts in the Amazon. For all of her projects, Knight used the book, Sensitive Chaos: The Creation of Flowing Forms in Water and Air  by Theodore Schwenk, as her go-to reference guide on “the laws apparent in the subtle patterns in water movement.”

Knight’s earliest pieces were cut entirely out of paper. Over time, she began to experiment with Mylar, a polyester film, for its translucent, ethereal qualities. In a 2014 interview in Sci Art in America, Knight admitted that “I like engaging in an ancient technique common in many countries with a contemporary product that reflects my contemporary approach.”

Eventually, when she wanted to apply color to her cuttings, Knight incorporated Tyvek, a material made from high-density polyethylene
fibers that is stronger than paper and is commonly used as a protective sheet underneath the finished exterior of buildings. She discovered that the material absorbs acrylic ink beautifully and being water-resistant, remains flat when exposed to the paint.

As part of her working process, Knight draws on the surface of her designated material before she cuts but edits as the piece progresses.

Knight’s intention with the 2019 installation Lucky Links was to “link” the opposing and divisive forces in our society today with the opposing forces existing in nature that have led to positive outcomes. The example of positive natural forces she uses in the installation is the formation of crystal, which occurs when the dissimilar elements of water and rock are combined over time. As she states on her website,

Over millenniums (sic) opposing forces and cycles in nature cooperated to support continual growth and creation. Is this unique phenomenon of cooperation in nature a link to our own culture’s successful survival?

Lucky Links visually represents my reflections on our polarized American culture, and the natural world. Suspended, hand-cut, Tyvek crystal patterns represent early interactions between water and rock that produced crystal. Camouflage components are hand-cut with faces and painted with the colors of human skin and portray our culture.

The installations are based on Knight’s 2012 experience in the field with Nebraskan hydro geologists who were testing the ground water in soil samples to determine the health of the water. The red, yellow, gray and
green in the installations are the same colors used by the geologists to color
code the samples according to the categorization of clay, gravel, sand and
silt. The highly porous nature of the hand-cuts components alludes to the wide buffer zones, soil remediation and water bank erosion and remediation.

Knight’s hand-cut works and installations are remarkable for their aesthetic beauty, for their inventive presentation of an age-old artistic discipline using contemporary materials and for their allusions to the scientific nature of water in our current, precarious world.  As she readily admits, Knight feels as if “she has no choice” in focusing all of her work on water, that “it is directing her,” rather than the other way around.

This article is part of Imagining Water, a series on artists of all genres who are making the topic of water and climate change a focus of their work and on the growing number of exhibitions, performances, projects and publications that are appearing in museums, galleries and public spaces around the world with water as a theme.