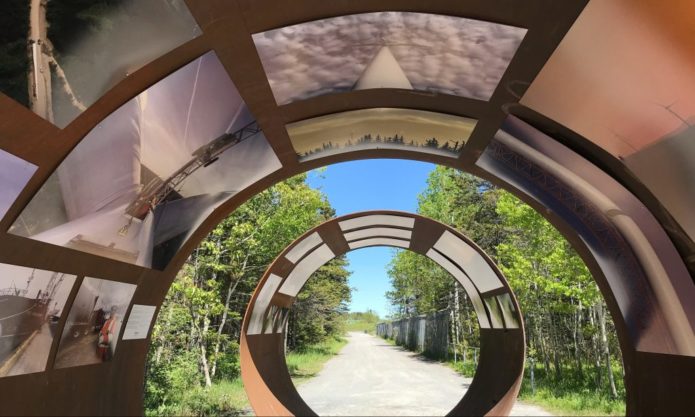 I’ve spent the lion’s share of the past decade photographing wind turbines from every possible vantage point: from the ground looking up, from the top looking down, from inside the towers and nacelles, from helicopters and drones, and even from the front seat of an 18-wheeler truck delivering 60-meter rotor blades up narrow mountainous roads to a wind construction site.

Yet in all those years, it never occurred to me that the blank walls on the inside of a wind turbine tower – thin metal walls that I had climbed past dozens of times on my way up to the nacelle – would one day serve as a gallery for my photographs of the turbines themselves.

In November 2018, two rust-colored metal wind tower sections were delivered to the Reford Gardens – les Jardins de Métis en français – as a donation from a wind tower manufacturer not far from my home in eastern Québec, Canada.

Slightly damaged, these two wind tower sections might otherwise have been discarded as scrap metal. But the director of the Reford Gardens, Alexander Reford, had previously expressed an interest in giving them new life as modern sculpture for a future garden project.

“I was immediately seduced by their simple elegance,” explained Mr. Reford. “I knew we could find a use for them at the gardens.”

The two wind tower sections spent their first winter at the Reford Gardens temporarily stored next to the popular Vertical Line Garden, designed by the US-based Canadian designers Coryn Kemster and Julia Jamrozik. I loved the juxtaposition of these two wind-inspired installations, one playful and ethereal, the other solid and grounded.

It was Mr. Reford’s idea to turn the two wind tower sections into a temporary outdoor photo gallery. I was honored that he asked me to propose a layout of images that would celebrate Quebec’s energy transition. I spent most of the winter thinking about this challenge, knowing that exhibiting photos inside of a curved metal tube is decidedly different – and more difficult! – than exhibiting on a flat gallery wall.

Throughout the winter, I visited the two towers multiple times on my snowshoes, standing inside and gazing upward, trying to visualize my photos spread out over a 180 ft² (16.7 m²) curved rusty surface with several imperfections. To the best of my knowledge, this would be the first photographic installation of its kind in North America, so I wanted to get it right.

By early spring, I had selected 24 photos – 12 for each tower – that would give visitors to the Reford Gardens a sense of entering a wind energy construction site. I gave priority to images of the workers – electricians, mechanics, iron workers – who are building Quebec’s clean energy future with their own hands. Below is the layout for one of the tower sections:

By early May 2019, the two wind tower sections had been moved next to the Maison ERE 132, a certified LEED Platinum building at the Reford Gardens that serves as an interpretive center to raise public awareness about eco-construction adapted to Quebec’s northern climate. The obvious ecological link between the Maison ERE 132 and the two wind tower sections made this a perfect spot for the photo installation.

Installation of the 24 photographs, printed on aluminum panels, started in mid-May. After breaking several standard metal drill bits, we quickly learned that cobalt drill bits are much more reliable for piercing raw metal. But the more important problem we encountered was spatial: after installing the first five photos, we noticed that the tower sections were not straight “tubes” but rather “cones” – a wind tower is larger at the base than it is at the top, so each tower section is slightly (imperceptibly) more narrow at one end than the other. This affected the original layout of my images, and I had to adjust the space and angles between each photo to account for the conical shape of each tower.

The inauguration of Winds of Change, my first solo photographic installation, was June 16, 2019. It will run until October 6, 2019 at the Reford Gardens in Grand-Métis, Quebec, Canada. If I can find supplemental funding for a second year, I hope to add audio recordings of the voices of some of these energy workers to give visitors to the Reford Gardens a more immersive experience of what it is like to enter a wind energy construction site.

Below is the text to Winds of Change, which explains my vision:

How can artists contribute to cultivating a post-carbon vision? This question is at the heart of photographer Joan Sullivan’s ten-year quest to help shift the climate change conversation from apathy to action, from despair to hope.

Resident of Quebec’s Lower Saint Lawrence, Sullivan found her artistic voice on the construction sites of some of Canada’s largest renewable energy projects. Through her lens, an industrial wind turbine becomes a beacon of home, designed by sapiens, powered by nature. Her goal is to seduce, to inspire others to visualize – to imagine – what a post-carbon world will look like.

Sullivan is part of a growing number of artists worldwide committed to “changing the narrative” about climate change by creating positive stories that offer a compelling vision of a post-carbon world we want to live in. As a renewable energy photographer, Sullivan has dedicated her second 50 years to documenting forward-looking stories that focus on solutions. Stories that invite audiences to ask themselves, “How do we get there from here?”

The message from Joan Sullivan’s body of work is consistent and simple: the technical solutions to climate change already exist. What’s missing at this existential moment is the political courage to go to scale. In this vacuum, Sullivan believes it is urgent for artists and architects and all creative souls to take their rightful place at the table alongside scientists, engineers, city planners, politicians and activists. Collectively, we must imagine a future of clean abundance and endless opportunity for all.

We cannot build that which we cannot imagine.

(All images by Joan Sullivan)