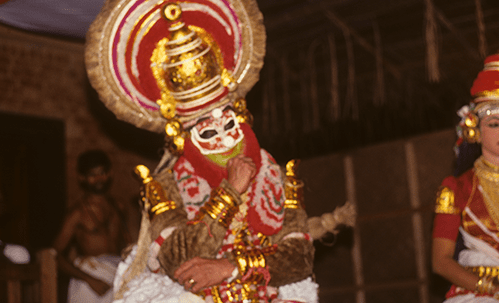 photo: Ammanur Madhava Chakyar in a kutiyattam performance of Bali Vadham. Photo by Erin B Mee.

If theatre is going to fundamentally change the way we think about climate change – and the way we relate to our planet and other species on it – we must change the way we make theatre so that it embodies new ways of sustainable thinking. Aesthetic theories reflect and shape ways of thinking, being, and interacting. Aesthetic theories are not, then, politically neutral; they require particular dramaturgical structures that are in turn political. In order to make theatre that embodies a politics of sustainability, I suggest we replace the aesthetic theory of catharsis – and all it implies and entails – with the Sanskrit aesthetic theory of rasa.

The term “rasa” has been variously translated as juice, flavor, taste, extract, and essence. According to The Nātyashāstra (The Science of Drama), the Sanskrit aesthetic treatise attributed to Bharata, rasa is the “aesthetic flavor or sentiment” savored in and through performance. It’s the mixing of different emotions and feelings that arise from different situations, which, when expressed through the performer, lead to an experience, or “taste” – the rasa – that is relished, or “digested,” by the partaker.

The metaphor is important: this relishing is multisensory in that taste always involves touch and smell, and it is internal and embodied: to taste something you have to put it in your body-mouth – or at least on your tongue. Eventually, as you digest, what you put in your mouth becomes part of you. So the metaphor of “tasting” performance posits aesthetic experience as interactive, embodied, sensual, tactile, multisensory, internal, and experiential. It allows us to think about becoming one with what is around us, with our experiences, rather than remaining separate. If we want to save the planet, this cognitive shift is crucial, and rasa can help us make it.

Like rasa, Aristotle’s theory of catharsis, which takes place in the teatron, or place of seeing, is one of emotional response; productions evoke this reaction in spectators. Unlike rasa, though, which asks partakers to relish emotion, catharsis is designed to purge excess emotion (the ancient Greeks privileged moderation). As noted classicist Edith Hall points out in her book Aristotle’s Way:

Emotions pre-exist in people, but they can be stimulated by an external force in a way that makes them susceptible to katharsis. An externally applied ‘treatment’ (music [or theatre]) actually creates a homeopathic response within the listeners [spectators], in that the arousal of a strong emotion to which they are predisposed leads to a lessening of the grip which that emotion has on them.

The central idea of catharsis – and productions that have been influenced by catharsis and/or embrace catharsis as a central goal – is that it “cures” excess emotion. Catharsis devalues emotion by asking us to experience it only in moderation – and to purge, or remove, any excess. It also asks us to maintain a distance between ourselves and that which we encounter and experience. This is the mindset that theatre needs to address, but before it can address it through content, theatre needs to address the political implications of its aesthetics.

The central metaphor of catharsis (sight) distances us from the world around us; that of rasa (taste) connects us to it. Words and metaphors are powerful because they not only reflect the way we think, they shape it. As catharsis and rasa govern modes of thinking and interacting on stage and in the auditorium, they therefore have implications on the way we interact with each other, with other species, and with the planet itself.

Catharsis demands a linear dramaturgical structure that builds to an ultimate release of tension or excess emotion in the form of a climax: A leads to B, which builds to C, which builds to D, and so on until the climax is reached. A, B, and C are not valued in and of themselves, but for what they add to the build of the linear narrative. Linear narratives also teach us to believe in causality (A causes B, which causes C) and are closely associated with notions of progress. So catharsis asks us to see the timelines of history in terms of progress and causality. Catharsis is also closely associated with agon – conflict, contest, competition. The plot moves forward because two characters enter into conflict with one another; there are winners and losers. All of this to say: catharsis reflects and constitutes notions of progress, linear (rather than cyclical) time, conflict, and dominance. These modes of thinking are detrimental to solving current climate issues, but they are embedded in Aristotelian theatrical structures.

In contradistinction, rasa requires a nonlinear, flexible dramaturgical structure that allows the partaker to linger in and with particular moments and to “wander around,” exploring numerous sensorial stimuli that give rise to emotions that can be savored. Rasa asks the partaker to value tributary streams, stories, and feelings. Rasa depends not on conflict but on association and elaboration. To return to the metaphor of food: an amuse bouche is an experience to relish in and of itself; it is not a prerequisite for the appetizer. Nor is the appetizer a prerequisite for the main course. Although vegetables are often considered to be a prerequisite for dessert, dessert is not the “goal” of a meal. A meal has things that come before and things that come after, and certain tastes complement or interact with each other, but D does not depend on C or B or A. You can still understand and appreciate a main course if you have not had an appetizer; in a non-linear structure, A, B, and C are valued in and of themselves, as a means to an end.

Rasa allows for multiple experiences and interpretations, it eschews causality and linear notions of time and progress. I believe the ways of thinking embedded in the aesthetic theory of rasa can be helpful in rethinking our relationship to the planet and to climate. It can help us think about time as cyclical (like the seasons), relationships that are not based on conflict, and interactions that do not determine winners and losers. If rasa suffuses our theatre, rather than catharsis, it will teach us different modes of interacting with the planet and each other.

For the most part, performances that offer catharsis are viewed on the proscenium stage, where much of the theatre in the United States takes place. This setup invites “the male gaze,” which describes the (male) spectator’s act of looking, or gazing, in order to fulfill his fantasy of controlling the (female) other. Even when the spectator is a woman, performances are constructed, consciously or unconsciously, with the male gaze in mind. The classic statement of the gaze is explored in feminist film theorist Laura Mulvey’s essay “Visual Pleasure and Narrative Cinema.” Mulvey draws on Jacques Lacan’s psychoanalytic theory of identity formation (the mirror phase, when an infant sees themselves in a mirror and is able to ask the question, “Is that image me?”). According to Lacan, the recognition of “myself” by the infant is overlaid with misrecognition and leaves the young person with a fundamental ontological-identity insecurity. It also initiates lifelong scopophilia, or love of looking, where the pleasure in looking “has been split between active/male and passive/female” such that the male look (or gaze) “projects its fantasy onto the female figure,” who becomes a bearer rather than a maker of meaning.

In Ways of Seeing, art critic and writer John Berger links the male gaze to landscape painting – which allowed land owners to display paintings of the land they owned on their walls to impress their guests – and to the rise of capitalism. He also links the male gaze to the invention of perspective, which puts the human viewer at the center of the world that is viewed, and implies that “man is the measure” and everything is laid out for his viewing pleasure. This creates a human-centric view of the world, and the notion that humans own what they see. Thus, ways of seeing are political. The male gaze, built into the structures of seeing set up by the proscenium, encourages us to see the world as though it is laid out from and for our own perspective, and to use each other for our own benefit. A viewing practice that encourages us to take what we need and discard the rest teaches us a mode of engagement that is not sustainable.

Ways of seeing rasic productions are built on darshan, which in Sanskrit means “seeing.” Darshan refers to the “visual perception of the sacred,” and, more specifically, to the contact between devotee and deity that takes place through the eye. In contradistinction to the male gaze, darshan is an exchange: the devotee goes to see the divine and to be seen by the deity in order to take in a superior perspective – maya, or illusion. In other words, sight becomes insight, a revelation occurs, and the spectator is transformed into a seer.

Most dance-drama in India is performed in the round, or in a three-quarters thrust. Many ritual performances are environmental and/or processional. In these circumstances, the spectators’ gaze cannot be possessive of its “desired object” because there is neither a central place of performance nor a central place from which to view and experience the event. The male gaze – the notion that everything is laid out for the viewing pleasure of the viewer as a commodity – is disabled. Darshan offers a way of seeing and a mode of engagement that is about partnership, about co-creation. No one dominates; it’s about growth. This way of seeing is more useful for theatre that seeks to address the causes of climate change and shift our ways of interacting with our planet.

Catharsis invites a distant, commodified, competitive approach to theatre that allows us to dominate, to take what we want, and to discard the rest. In contradistinction, rasa is a more sustainable approach to theatre, to ways of seeing, to modes of engagement, to each other, and to our planet. Most importantly, it is co-created: it teaches us to work together. If we want to make theatre that is itself sustainable, but that also embodies and teaches us sustainable ways of thinking and being, I urge us to create rasic rather than cathartic theatre.

This article was originally published on HowlRound, a knowledge commons by and for the theatre community, on March 26, 2019.

Erin B. Mee has directed at the Public Theater, New York Theatre Workshop, SoHo Rep, HERE, The Magic Theatre, and The Guthrie Theater in the United States; and with Sopanam in India. She is the founding artistic director of This Is Not A Theatre Company, for which she directed Pool Play (in a swimming pool), A Serious Banquet, Readymade Cabaret, and Ferry Play – a smartphone play for the Staten Island Ferry. She is the author of Theatre of Roots: Redirecting the Modern Indian Stage, co-editor of Antigone on the Contemporary World Stage, co-editor of Modern Asian Theatre and Performance 1900-2000, and has written numerous articles for TDR, Theatre Journal, American Theatre Magazine, SDC, and other journals and books. She is Assistant Professor/Faculty Fellow of Dramatic Literature at NYU.