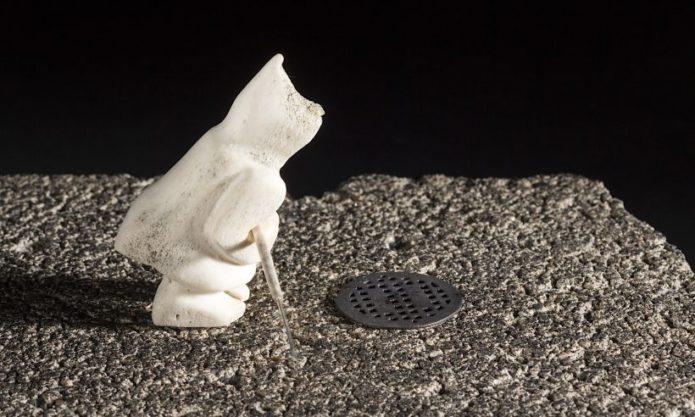 Inuit are an Indigenous people who live mostly in the circumpolar regions of Canada, Alaska and Greenland. Although the various ethnic groups use different dialects, Inuit share the common language root of Inuktituk and call their homeland Inuit Nunangat. When Natan Obed, the President of Inuit Tapiriit Kanatami, the national organization representing the interests of Canada’s Inuit population, recently addressed the Meeting of First Ministers and First Nations, Inuit and Metis Leaders, he explained how his people have been impacted by climate change:

Inuit Nunangat was one of the first areas in the world to experience the direct and local level impacts of a warming planet. Our relationship with our environment has already been profoundly altered…Unprecedented rates of summer sea ice loss, reduced sea ice in the winter, ocean acidification, temperature and sea level rise, melting permafrost, extreme weather events and severe coastal erosion undermine our ability to thrive in our environment…Rapid climate change is affecting our ability to access our traditional foods in a time when too many families are already struggling to put food on the table. Inuit hunters die each year from falling through thinning winter sea ice in our newly, rapidly warming environment. The consequences are overwhelming.

Seeing what is happening to their homeland, a number of contemporary Inuit artists are reflecting these profound changes in their work. Some of the most striking examples of Inuit art on climate change can be found in a traveling exhibition, entitled LINKED: When Contemporary Art Creates Awareness About Climate Change, most recently installed at the Fram Centre in Tromsø, Norway from January – February, 2019. Previous installations were held at the Arctic Circle Assembly in Reykjavik, Iceland (2018) and the Musée Océanographique de Monaco in Monaco, France (2015-2016), among other places.Linkedwas curated by Martha Cerny, the co-founder of the Cerny Inuit Collection in Bern, Switzerland. It contains pieces from the museum’s 1000+ collection of contemporary Inuit sculptures, lithographs, drawings and textiles.

I recently interviewed Martha Cerny via Skype. She explained that she and her Swiss husband, Peter, met working in a hospital on reserve land north of Vancouver as a nurse and radiologist. In the early 1990s, they became aware of a collection of 127 works by Inuit artists for sale in Switzerland. Having come to know and appreciate the culture, daily life and stories of the local Inuit population, they were fascinated with the artwork and ultimately purchased the collection. Now living in Switzerland, they have traveled extensively throughout the Arctic to expand their collection with artworks from the High North in Canada and Siberia, and other regions of the circumpolar Arctic. Today, the Cerny Inuit Collection is located in a renovated, former mechanic’s garage in Bern and is considered to be one of the world’s most comprehensive collections of contemporary art and culture from the High North and Arctic. The materials used by Inuit artists in the collection are mostly taken from what is at hand in their world, such as stone, antler, whalebone, musk ox horn, sealskin, and mammoth and walrus tusks.

Passionate about the work in the traveling exhibition and her collection, Cerny explained some of the traditional Inuit cultural references found in the pieces. She noted that the figure of Sedna, the respected and feared mother of all the sea animals, is a dominant presence in Inuit art. But instead of appearing as powerful and formidable as she traditionally has, she is transformed by artists addressing climate change. In Sedna Lamenting the Loss of Sea Ice by artist Floyd Kuptana, the Sedna figure has become a boat rescuing those affected by rising seas. With her propeller located in the bow of the boat, her normally beautiful hair reduced to a few strands and her arms rowing backwards, she is the expression of a “world in trouble.” Similarly, in Shared Migration by Abraham Anghik Ruben, Sedna is represented as a boat but in this case, she is supporting people, animals and spirits as the sea ice melts. Cerny pointed out that the sculpture signifies how “we are all in the same boat, in the same situation.” It also refers to the forced migration of people displaced by rising seas.

In addition to adapting the representation of Sedna, contemporary Inuit artists have transformed traditional figures of Inuit hunters, animals and sea life to call attention to climate change. Jesse Tungilik’s Manhole Hunterportrays a figure with the clothing and stance of an Inuit hunter in the process of hunting, but instead of standing on sea ice, which has supported the Inuit way of life for centuries, he is standing on concrete and staring at a manhole cover. Creature on the Floe Edge by David Ruben Piqtoukun is an animal figure guarding the floe edge where the open sea meets the frozen sea. Rather than having the normal two eyes and one mouth used to warn the hunters when it is safe to travel on the sea, this creature has three eyes and two mouths. The artist is indicating that the floe edge now needs much more vigilance in monitoring thin ice.

Inuit are the bellwether of climate change in the Arctic. As Natan Obed put it, Inuit “culture is inextricably linked to the environment with (traditional) knowledge of seasonal rhythms, weather predictions, animal migration routes, in addition to the quantity and quality of sea ice.” In response to what they have seen happen to this life-sustaining relationship, Inuit leaders have been working diligently to inform government officials about their existential challenges so that the government can develop policies and projects that will help them adapt to an environment transformed. Contemporary Inuit artists like Floyd Kuptana, Abraham Anghik Ruben, Jesse Tungilik and David Ruben Piqtoukun are using their powerful works of art to provide an important visual representation of these tragic changes.

This article is part of Imagining Water, a series on artists of all genres who are making the topic of water a focus of their work and on the growing number of exhibitions, performances, projects and publications that are appearing in museums, galleries and public spaces around the world with water as a theme.