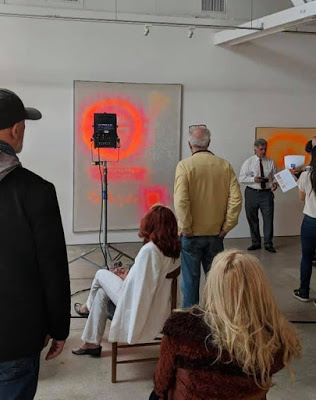 On April 20th at The Landing gallery in Culver City, Patricia Watts invited astronomy curator Jay Belloli and physicist Dennis Harp to give a black light talk and tour of Richard Bowman’s fluorescent paintings of scientific imagery. The selection of twenty works were primarily from the 1970s when the artist was making his Dynamorph series. It was revealed by a family member during the talk that Bowman had indeed held a black light party of several paintings with his students in Palo Alto in the 1970s. This aspect of the work seems intriguing today, however, as a serious student from the Institute of Art in Chicago, and a Bay Area abstract painter, black lighting his work was only experienced on the down low. Many critics got that Bowman was a good painter and this his use of fluorescent pigments was not simply a gimmick, but a provocation of the deeper concepts he was exploring with regard to nuclear physics. It was a great turn out and the audience had lots of questions for Jay and Dennis as they got to know his work through the lens of science rather than art for art sake. Some people felt that they did not like looking at the paintings for very long under the black light, and that it was a relief to enjoy the paintings as they are in daylight, which also changes hues as the light changes throughout the day. Bowman felt that the fluorescent pigments emitted an actual energy, which was confirmed by Harp as fact, if only on a very low frequency. Bowman’s work is about making the invisible visible, what artists today are doing to illustrate climate science in aesthetic terms. The artist was definitely ahead of his time, and offers artists today a pioneering take on exploring the sciences through painting.