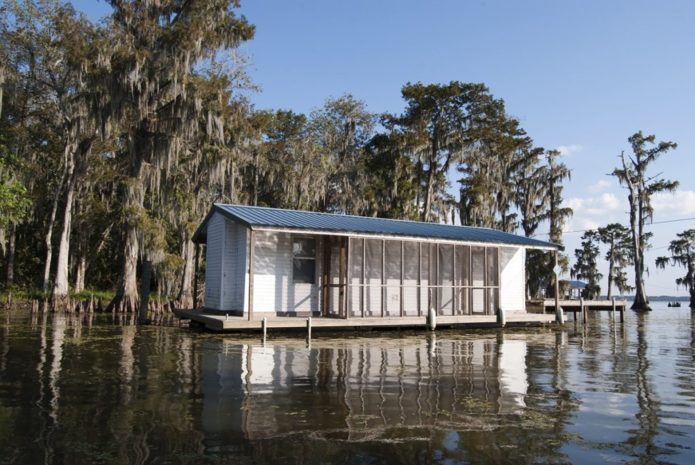 Happy wishes aside, I’m sorry to report some sad news: This February we mourn the passing of the “godfather of climate science,” Wallace Broecker, who helped popularize the term “global warming.” According to the BBC, Broecker “spent a career that spanned nearly 67 years at Columbia University in New York.” The scientist published an important study in 1975 that helped usher in a new era of thinking about the effects of carbon dioxide on global temperatures. Professor Broecker died on February 18th at the age of 87.

His legacy is felt by scientists, activists, climate communicators, artists, and writers around the world, all of whom continue to produce exciting and vital work that speaks to the urgency of climate change.

This month I have for you a wonderful interview with one of those artists. Virginia Hamusik is a photographer and architecture researcher whose work explores the effects of climate change on various landscapes. You may have seen her photos in The Atlantic, Places Journal, The Times-Picayune, Oxford American, NPR, or Fast Company.

Your project, A Receding Coast, features photographs of “the architecture of climate change.” Please tell us what you mean by that phrase.

We are living in the Anthropocene, which is characterized by human intervention on the natural environment. Climate change is a byproduct of human intervention and is shaping how we build, and will only continue to shape that process more so.

Architecture symbolizes society’s values: it is a physical manifestation of what we consider important and how we live our lives. When I’m describing my work photographing “the architecture of climate change,” I’m referring to the structural response to environmental issues.

Capturing the architecture of this moment is important because we are consciously changing the way we build and live based on environmental conditions, for arguably the first time in American history. I studied architectural history in college, and I approach my photography work in a similar way; I’m thinking about the structural details that describe larger cultural values.

What have you learned about how the communities you photograph are preparing – or not – for future extreme weather events and sea-level rise?

I think it’s important to understand that there isn’t one universally understood solution to the problem. It’s more common to hear about disagreements on the causes of climate change – or if it’s even happening – but with my work, I’ve become much more aware of the various types of approaches municipalities, organizations, and individuals have developed to combat the effects.

There are hundreds of challenges. Some challenges are specific to a community’s geography, some are not. There’s no one-size-fits-all fix, and I think that’s something the resilience field is focusing on too much. Organizations have done an important job of creating shared knowledge among cities, but there’s no global, local, or even state standard to how various communities (coastal and inland) should be re-imagining planning processes. As a result, some communities will suffer more than others due to inaction or policy failures. I’ve been following the work of scholars like Jesse Keenan at Harvard who are researching the impact of “climate gentrification” in Miami. The economics of coastal climate adaptation are already working as they were designed to –  benefiting those with more affluence and means to seek higher ground, and leaving poorer communities with few options but to be even more vulnerable to flooding.

In another project, Liminal Frontier, you explore the change in how people are thinking about coastal land. What has surprised you the most about what you’ve learned or witnessed?

Since this body of work is a lot larger in scale, I’ve spent a lot of time organizing and framing the project in parts. Most of the “chapters” are organized by geography (East, West, Gulf coasts), but there are also sub-categories such as recreation, transportation, and dwelling.

Through this process, it’s become so much more explicit to me that the history of landscape photography has been dominated by the male gaze. As a woman, I’m planning out my shoots based on time of day, whether I feel safer with a partner, and, if so, coordinating their schedules. There are a dozen other factors that I don’t think are the same for men. Some of my favorite projects about American land were all done by men (Ansel Adams, Joel Sternfeld, Walker Evans) who had the privilege to photograph in desolate landscapes alone.

That’s all to say that this project is really helping me think critically about the process and what it means to make a photograph about land as the climate is changing. I think it’s a critical time to not just think about how we live along the coast, but who is telling those stories and how American identity is captured.

As Susan Sontag writes, “The painter constructs, the photographer discloses.” What can photographs of architecture, land, and other objects affected by climate change “disclose” to us that perhaps other art forms (including the written word) can’t?

I love a good Susan Sontag quote. I think that the accessibility of photography is what drew me to it from the beginning and continues to do so. I was raised in a working-class family that was full of artists, but they never referred to themselves as such because of the elitist stigma. Art means different things to different classes. My dad is a sculptor and carpenter, but he never describes himself as one. It’s just what he does when he’s not working, nothing flashy.

I like to think that I make my images in the same way; I don’t manipulate or even edit them much. As a photographer, I control the light and the frame, but not much beyond that. In terms of subject matter, the architecture and landscapes that I photograph really speak for themselves. The evidence is there. It’s real life looking back at you.

As an observer, you are able to step back and take in the details within a frame that you may miss in the context of real life. I like to compare the “banal” landscapes that I capture to seeing photographs of yourself. You analyze pictures of yourself more than when you’re in front of a mirror because someone else’s gaze may have captured something you never noticed before.

Also, I’m really not interested in making work that exploits victims of environmental disaster, but can rather be used as an educational tool to help move the needle on environmental stewardship.

What has the response to your work been like? Have you experienced any push back?

Overall, the response has been encouraging. I’ve been really lucky to have my work published in a number of outlets that prioritize new voices in photography and architecture, and have been able to connect with so many thoughtful people changing their communities.

Most of the push back that I’ve received has come from individuals who don’t believe in climate change. Not a big surprise there, but this exists outside of the South!

Honestly, the most challenging conversations that I’ve had are with self-identified liberals and progressives whose prejudices of the South or rural communities come out with their comments. “How could people be so ignorant?” “Why don’t they leave?” “Why would you choose to live there?” These are all actual questions that I’ve heard posed in a serious way. It’s really disappointing to me, but just shows the work that still needs to be done.

What’s next for you?

I’m still disseminating A Receding Coast and connecting with leaders in the climate adaptation field on collaborations. Right now, I’m in the development phase of Liminal Frontier and am identifying funding to build out the project in phases. I’m hoping to spend time in the Chesapeake Bay this summer and photograph some sites that I’ve been trying to get to for a while. In addition to this project, I’m excited to be writing more and am working on a few pieces for the Louisiana-based store and publication, Defend New Orleans.

Read more about Virginia Hanusik and her work at her website.

For previous articles by Virginia Hanusik, check out:
A New Narrative for Landscape Photography in the Anthropocene