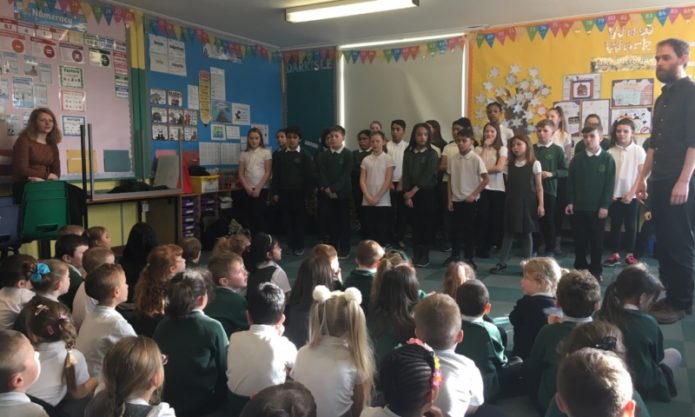 On Tuesday (26 February), Primary 6 students of Fernielea Primary School performed two co-created songs about flooding as part of a project to connect local residents with flood risk and their environment through the medium of music as part of ‘Creative Approaches to Engaging Flood Risk Communities’.

“The Den Burn is flooding, don’t panic” was the key message of the first song, “The Burnie Journey”, sung by Mrs Leslie’s class to their fellow pupils and representatives from the Scottish Environment Protection Agency (SEPA), the Scottish Flood Forum and the Dee Catchment Partnership. The song aims to reassure students and local residents about flooding in their local burn and creatively inform them of some of the flood management schemes the council have set up including at the Den of Maidencraig and Stronsay Park, both of which are designed to store floodwater upstream, protecting roads and properties further downstream in the heart of Aberdeen. 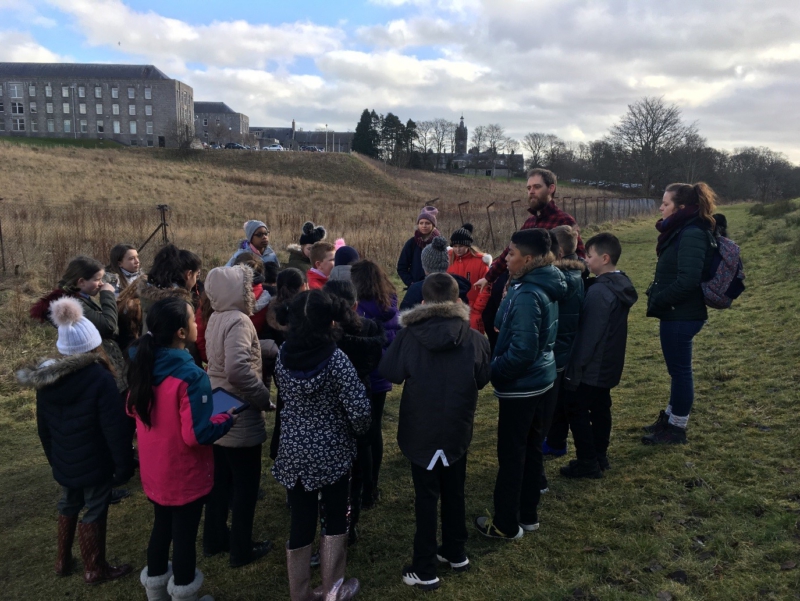 As part of the project, Simon took the class on a walk of the Den Burn pointing out some of the flooding and flood management issues. The pupils took recordings of the sounds they heard and learned verses of the Burnie Journey song along the way

The second song, “The Flood Kit”, is a memory song to the tune of “Rattlin’ Bog”, and was written with the class to remind them what useful items to include in a flood or emergency kit.

On working with the Primary 6 class, Simon Gall said:

“It’s been heartening to see the children engaging so enthusiastically with the Den Burn and flooding issues more generally. I think our hands-on, creative learning approach to the topic is key. The children use their creative skills to process and convert fairly pedestrian information – gathered first-hand – into something unique and memorable. I hope the experience leaves a lasting impression on them while also leaving some lovely creative work for others to use and enjoy.”

The project has been developed in partnership by the Scottish Environment Protection Agency (SEPA) and Scotland’s culture and sustainability charity Creative Carbon Scotland. The project explores how creative approaches could be used by Scotland’s flooding authorities to engage with communities vulnerable to future flooding and raise levels of flood awareness and preparedness in a way that is meaningful and relevant to the community. 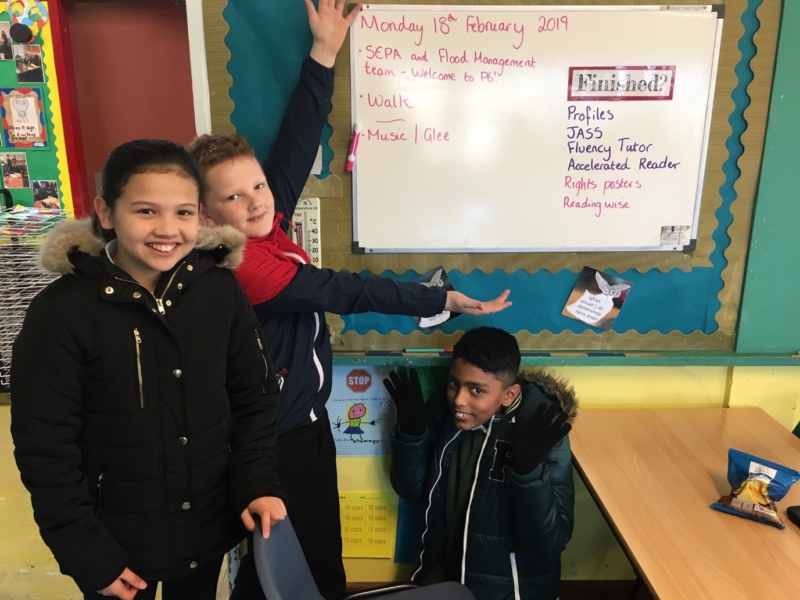 Some of the primary 6 student musical stars.

SEPA is Scotland’s national authority for flood forecasting and warning and works with communities to help them be more flood resilient. Recently, SEPA has significantly enhanced its existing warning service in north east Scotland with the addition of a new coastal flood warning scheme, covering 2033 properties in Aberdeen, Aberdeenshire and Angus, giving people time to take preparatory action against the impact of flood events.

“Every day SEPA works to protect and enhance Scotland’s environment, including helping Scotland prepare more powerfully for future increased flooding. Getting the next generation involved in understanding how flooding happens is a vital part of how we do that, helping local communities become more resilient. More traditional engagement will always have its place, but making learning more fun and the message memorable can be a far more effective way to get young people interested and spreading the word to their friends and families on how they can be flood-prepared. This could include encouraging their parents to sign up to SEPA’s free public flood warning service, so free messages for home and travel areas can be delivered direct to their phone. Register online at https://floodline.sepa.org.uk/floodupdates/ or call 0345 988 1188.”

“We’re thrilled to be working on this project with SEPA. As a charity which promotes, supports and harnesses the role of culture in addressing the climate crisis, we see a key role for creative practitioners, such as musicians, to help draw out the creativity and imagination of communities in their response to climate change and offer different skills and approaches to contribute to the work of organisations like SEPA.”

“Our schools have a great record of getting involved in environmental projects across the city and in getting the local community involved. Only last week Orchard Brae School earned a prestigious Green Flag from Eco-Schools Scotland and it’s great to Fernielea School involved in a project like this with SEPA. I’m sure all the pupils and staff involved will find the day really rewarding”.

Creative Approaches to Engaging Flood Risk Communities is a partnership between SEPA and Creative Carbon Scotland support from Aberdeen City Council, has been commissioned by SEPA with via SEPA’s Research and Development Fund.

Creative Carbon Scotland’s involvement is part of its Culture/SHIFT programme which supports cultural and sustainability practitioners to explore new ways of working together to address complex problems and bring about transformational change.